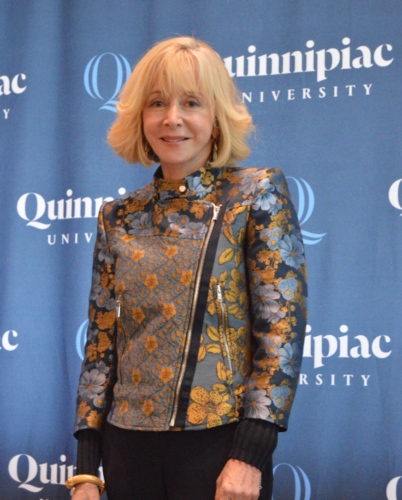 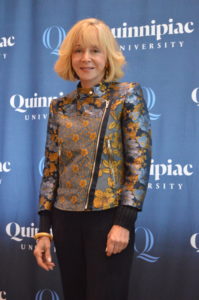 Dr. Judy D. Olian, Dean of the Anderson School of Management at UCLA, was unanimously elected by Quinnipiac’s Search Committee to serve as Quinnipiac’s ninth president to replacing President John Lahey after he retires in June. Olian will be the university’s first female president.

In a press conference held on Monday, Jan. 29 at 3 p.m. in the Mount Carmel Auditorium, Olian discussed her plans as president of the university. She believes it is best for her to take her time learning about the Quinnipiac community from the inside out.

“With such an esteemed institution, it would almost be disrespectful to go in and presume that I know the answers without learning. The student body is a very important voice here,” Olian said.

Instead, Olian plans to dig deeply into the sources of excellence at Quinnipiac and see where individuals see opportunities.

“I’m excited for all the avenues of growth that are now available with her being hired,” freshman film, television and media major, Daniel French said.

Olian plans to develop the Quinnipiac community by making efforts to provide a sense of success and inclusivity among students.

“One of the great assets of my coming in is that I have to appreciate the breadth and depth of what is here,” she said in the press conference.

She believes inclusivity is an attractive trait of Quinnipiac’s culture, and an obligation in her eyes. Olian says she was attracted to Quinnipiac by its respectful nature, diverse community and thirst for relevance.

Under its new president, Quinnipiac will continue to be open to diversity. Olian describes community as being multidimensional.

“Every entity is going to have its own culture and goals and I will have a dialogue with business and every other unit on campus to forge the future,” Olian said.

While she does regard Quinnipiac as a highly acclaimed institution, Olian sees room for advancement.

Olian is determined to create a passionately engaged community that will serve as a model for other universities in higher education.

“We need to create models of learning that prepare our grads to be enlightened citizens to be prepared for jobs in the 21st century that don’t exist yet,” she said.

Olian hopes that Quinnipiac will become a “destination of continuous learning.”

At UCLA, she launched four new research centers, the Social Impact Initiative and the Anderson Venture Accelerator. Olian also helped to create the financial plan that was the University of California’s system. She is on the board of UCLA’s Technology Development Corporation and a chair of UCLA’s Council of Professional Deans for 10 years.

In terms of expanding campus further into Hamden, Mayor Leng said that each proposal will be dealt with on an individual basis.

Olian described Lahey’s footsteps as indelible. While President Lahey was not present at the reveal, Olian met with him and described him as “somebody to be admired and revered for the legacy he leaves.” 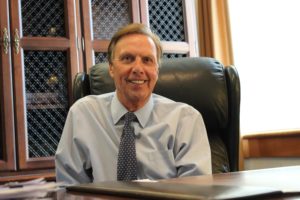 [/media-credit]In his 31 years as university president, Lahey introduced the Schools of Law, Medicine and Engineering. Enrollment grew from 2,000 to 10,000. The campus grew from 100 acres to nearly 650 over three campuses and the endowment grew from $3 million to $400 million.

Lahey also established both Quinnipiac Poll and the Ireland’s Great Hunger Museum. He also brought Quinnipiac athletics from Division II to Division I.

Lahey had previously announced his retirement in a letter to the Quinnipiac community on April 14, 2017, effective June 30, 2018.

“Words alone cannot express the thanks and appreciation I feel for the privilege and honor I have been given to serve as President of Quinnipiac University for more than three decades,” President Lahey said in his announcement.

William Weldon, Chair of the Quinnipiac Board of Trustees and Presidential Search Committee, mentioned in a letter to the Quinnipiac community on April 26, 2017 that “As trustees, our responsibility now is to ensure that we seek the most highly qualified, talented and experienced individual to lead the university in the coming years.”

SGA President, Ryan Lynch expressed optimism for Olian. Lynch represented SGA on the Advisory Committee and was pleased with the respect he received and the voice he was allowed. He felt students were well represented and expressed great hope for Olian’s presidency. 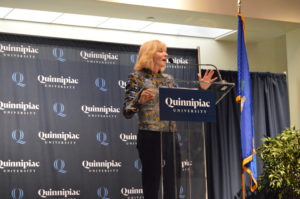 [/media-credit]“She takes her time to talk, she knows what to say and she doesn’t say things just to stop questions,” Lynch said. “ She’s very compassionate. As you could see when she was addressing people, she referred to everyone who spoke to her with their first name to begin with and closing by thanking them.”

While he does appreciate everything Lahey has done in his 30 years, Lynch is excited for the new president.

The university did not state Olian’s salary for her upcoming position. However, she received $533,942 in total compensation in her current role at Anderson School of Management, according to UCLA records. President Lahey received total compensation of over $1.46 million in 2014 as reported on the IRS 990 tax-exempt form in 2015.