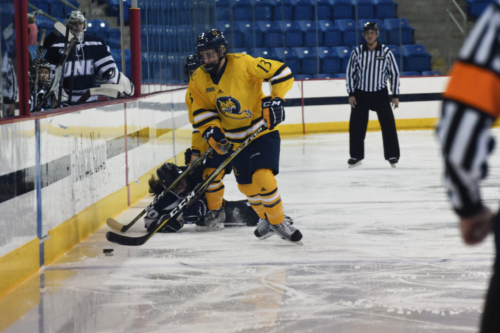 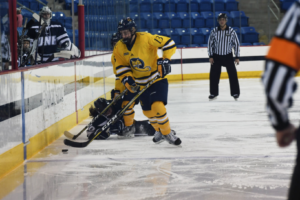 [/media-credit]The Quinnipiac women’s ice hockey team lost in its first game in almost two weeks on Friday to the University of New Hampshire by a final score of 4-2.

“Clearly we lost today, but I’m happy with so many things that we did,” Quinnipiac head coach Cass Turner said. “We pressured the puck in a way today that we haven’t, and I thought we had a great team energy from one shift to the next.”

The Bobcats (13-12-2, 9-7-0 ECAC) had five opportunities on the power play, but ran into reigning Hockey East Defensive Player of the Week Ava Boutilier, who finished the night with 30 saves.

“We had some chances around the net,” Turner said. “We just didn’t make that final play to put it in the net.”

Despite having failed to convert on their power play chances, the Bobcats penalty kill succeeded in preventing New Hampshire from capitalizing in their four attempts. This was, in part, due to shot blocking. Turner had praise for some of her older players.

“We want to be hard to play against,” Turner said. “Shannon Cherpak and Alicia Barry…in moments when where we needed plays today they were ready to make them.” 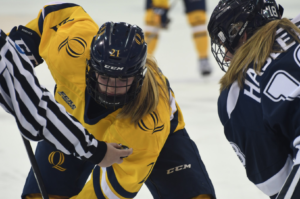 [/media-credit]“I feel like you just have to play the same against all of them,” junior captain Melissa Samoskevich said. “I think we can shut (McManus) down if she’s scoring goals, we can do it.”

Freshman forward Brooke Bonsteel lit the lamp for her 8th goal of the season to open scoring in the second period. Samoskevich also tallied a goal to give the Bobcats a 2-1 lead, which only lasted 3:42, and was the last lead they would see in the game.

With the Bobcats set to face off with New Hampshire again on Saturday, adjustments are going to be made.

“I think that we can move the puck a little bit better,” Turner said. “We had moments to play faster today and if we were a little bit better in terms of where we were in support and having a little bit more time and space in where we put ourselves…I think if we are able to play that way we’ll have more opportunities.”

Other adjustments that may be seen in Saturday’s game are line changes. According to Bonsteel, line changes aren’t much of a problem.

The Bobcats will play New Hampshire again Saturday at 3 p.m. at the Frank Perrotti, Jr. Arena in hopes to split the weekend series and return to the win column.