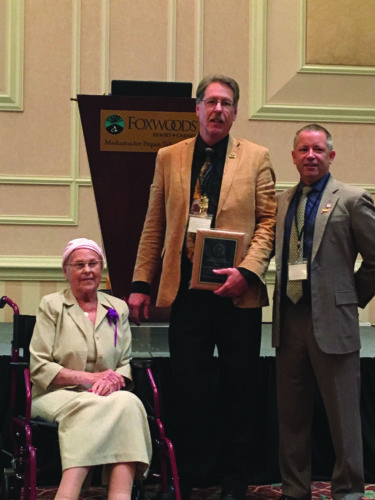 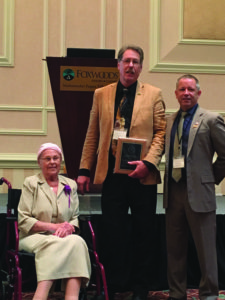 To be considered for the award, the individual has to have continuously served the society for 20 or more years, be a chair of a standing committee, hold office in the organization and have a positive impact on the CSRT, according to Diane Kosenko, the society’s current treasurer. However, this isn’t the only thing that the candidates have to prove to win the award.

“We also have a metric; people have to reach so many points in order to even qualify for the lifetime award… [Hennessy] surpassed that number by a lot,” Kosenko said.

Hennessy was surprised when he got the award from the CSRT.

“I had no idea until I was announced at the meeting that I was the recipient,” Hennessy said. “As I took a bite of a roast beef sandwich, they call out my name.”

Hennessy first became interested in radiology when he was young.

“Because of an orthopedic problem I had from birth, I was always, every couple of years, going for X-rays to check on development and things like that, and I always kinda wondered ‘What are these people doing behind the barriers?’,” he said.

After college, Hennessy began working in a New Jersey hospital and in an orthopedic office. In 1984, he made the switch to education and began teaching at Quinnipiac in 1994. Hennessy joined the CSRT in 1996, but he had been a member of a related organization in New Jersey.

Being a part of the CSRT is important because of the realities of the profession, according to Hennessy, which he feels need visibility through legislation.

“When I first came to Connecticut, there was no licensure for radiologic technologists, and we’re dealing in a profession where patients are being exposed to radiation,” Hennessy said. “We need to be licensed and certified because we’re the ones who have the training.”

Kosenko also has a high regard for Hennessy’s Quinnipiac students.

“You can tell that the students that come out of Quinnipiac are well prepared, and want to be professional,” she said. “A lot of students from Quinnipiac join the CSRT and become active members because of Bill.”

For Hennessy, keeping his students inspired is a matter of telling them what they can do after their time at Quinnipiac, which can range from working in places like Massachusetts General Hospital, to university hospitals like Yale-New Haven Hospital, to also becoming an educator on radiology.

“When you’re done, you can take my job; here are the keys, but you’ve gotta earn it,” he said with a chuckle.

In terms of that training, Kosenko said that radiologic technicians need 24 hours of training credits every two years in order to keep their licenses. One of Hennessy’s contributions to the society is with his lectures about current topics in the field. In giving these talks, Kosenko calls Hennessy the “consummate professional.”

“Bill will lecture on imaging procedures, and imaging positions for us,” she said. “He’s a great speaker and I think it’s because of his love for the profession. He’s dynamic, he’s interesting, and he keeps everybody’s attention.”

When Hennessy was given the award, it was given to him by the woman it was named after. Josephine Piccone, known to the CSRT as “Jo,” was a longtime member of the society, having worked as a radiologic technician for 67 years, according to the CSRT website. She died in November. Piccone influenced many members of the Society, including Hennessy.

“When I say she was a pioneer [for the Society] in Connecticut, she was one of the major voices in getting the licensure through in Connecticut,” he said. “She represented Connecticut and the profession down in Washington D.C. I understand that all the senators and their people knew Jo as soon as she walked in the door.”

As for the future, Hennessy has no plans of retiring.

“I’m not going anywhere. I’m a full time faculty, and I’m going to continue my involvement with the [CSRT],” he said.