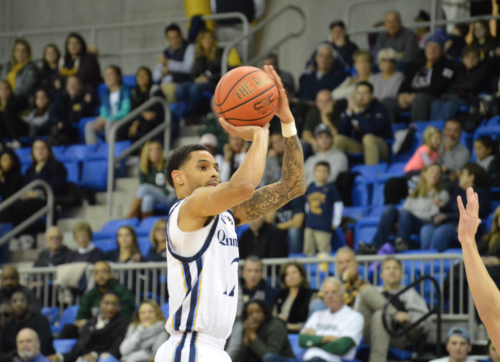 Quinnipiac head coach Baker Dunleavy made an emphasis the past few days of practice on team defense, something they would need against the high-powered Niagara offense.

“We really knew this (game) for us was going to be a challenge… We really stressed (defense) in three days of hard practice,” Dunleavy said. “You’ve got two of the best all-around players in our league (Matt Scott and Kahlil Dukes), specifically scoring the ball (on Niagara).”

The loss for the Bobcats came against a Niagara team which entered the night on a four-game winning streak led by its strong guard tandem of Dukes and Scott, both seniors.

Both the Purple Eagle guards were averaging over 20 points per game heading into the contest, and although Scott picked up early fouls which hampered his scoring, Dukes had no problem reaching 23 points by the end of the night.

Despite Dukes putting up his regular stats, Dunleavy was pleased that the focus on defense in practice was showing for the Bobcats in the first half. 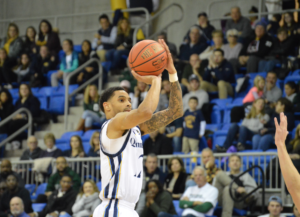 [/media-credit]“I was really excited and happy of how we handled that challenge early in the game,” Dunleavy stated. “But you learn lessons in that you can’t take it for granted that it was going to continue. You have to stay on edge, and defensively we let up in the middle of the second half and (Niagara) went on a big time run.”

The Bobcat defense was in full swing in as they held the Niagara offense, which averages 83.2 points per game, to just 35 first half points.

Dukes, Niagara’s leading scorer, had eight points on 3-for-7 shooting in the first 20 minutes. It was graduate student guard Isaiah Washington’s assignment to cover Dukes for much of the game and make Dukes as uncomfortable as possible on the offensive end.

“We know that (Dukes) is a player who likes rhythm, likes coming off ball screens, and shooting right off of ball screens,” Washington said. “(The game plan was) just to limit his threes (and) make him take tough contested twos… I think I did okay, but not good enough. So we’ll get back to the drawing board and get better.”

One of the sparks that kept the Bobcats in the lead for 17 of the 20 first half minutes was the play from senior forward Chase Daniels. Daniels came in the game and was a force in the paint, scoring 10 points in the first half and adding six more in the second half, most of which came from inside the paint.

“(Daniels) is doing a good job,” Dunleavy said. “I think he is still finally working his way into real game shape… But I think his mind is in the right place and he is giving a good boost off the bench.”

Entering the second half with just a 37-35 lead, Quinnipiac came out aggressive offensively to gain an edge over Niagara.

Less than five minutes into the second half, two consecutive 3-pointers from junior guard Aaron Robinson and Washington extended the Bobcat lead to 51-41.

The Quinnipiac edge was not enough, however, as the Purple Eagles went on a 25-5 run of their own following those Bobcat 3-pointers.

The Niagara run was headlined by none other than Dukes making a few signature long-range shots and an easy layup.

With just six minutes left in regulation the Purple Eagles had flipped the script and held a 10-point lead of their own at 66-56. 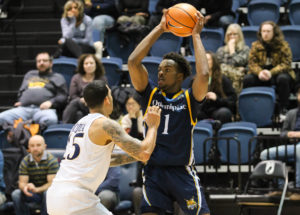 [/media-credit]The Bobcats had one final push when Washington came in off a timeout the next possession. The set play allowed Washington to nail a contested 3-pointer to bring the Bobcats back in the fight, but the player who had the Bobcats number in the second half, Dukes, answered right back on the other end in which he rose up for a tough two pointer, curling off a screen.

Senior guard Cam Young led the Quinnipiac with 18 points, but it wasn’t enough to pull the Bobcats from the late second-half deficit.

After the final whistle the Bobcats fell to 6-13 overall and 3-4 in MAAC play, while the Purple Eagles (12-8, 5-2 MAAC) cruised to their fifth straight victory.

Quinnipiac’s next game comes on Sunday at home against Siena, a team that the Bobcats defeated 71-70 on New Year’s Day.