Runnin’ the Point: Wins are wins, no matter the margin 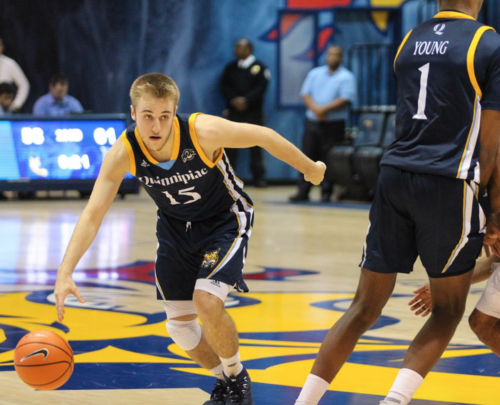 “It’s never pretty for us and we’re kind of starting to embrace that.”

Quinnipiac head coach Baker Dunleavy and the Bobcats have been preaching that nearly all season long, and it was never more true than during a 80-79 overtime win over Marist on Wednesday. 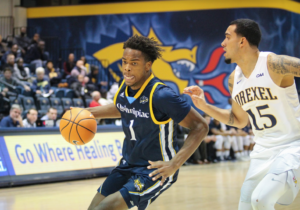 [/media-credit]All six of Quinnipiac’s wins this season have come in games decided by two points or less.

“I think we’re trying to take (being in close games) on as part of our identity,” Dunleavy said.
“We’re going to be in some close game situations, and if we’re not comfortable in these situations yet, well, we should be.”

Quinnipiac won its first two MAAC games against Monmouth and Siena by a combined three points before dropping an 82-74 contest to Canisius to fall to 2-1 in league play.

After an uncharacteristic 84-58 blowout loss at Saint Peter’s last Sunday that Dunleavy chalked up to fatigue, the Bobcats were right back on track against Marist, improving to 3-2 in the MAAC and 6-11 overall.

The one constant throughout the past month has been senior guard Cam Young. He’s scored 18 or more points in eight straight games, including averaging 22.6 points per game (PPG) in five MAAC games.

In the win over Marist, Young shot just 8-for-21 from the field, but scored the final five points in overtime to seal the victory, including a key 3-point play after Marist took a three-point lead with less than a minute remaining. Young also added a team-high nine rebounds (six offensive).

“I know (my team) wants me to make plays and they believe in me,” Young said. “I know I can make the right play (whether it be) to pass it or shoot it so I thought I did a good job (handling it) today. I can kind of feel when I’m going to miss a shot, so I can just easily track it down, (but) I feel like I should’ve been making the first (shots).”

It’s becoming more and more evident that the Bobcats will go as far as Young carries them this season. Other players have stepped up in spurts, but no one has emerged as a clear second option offensively.

Senior Chaise Daniels, second on the team at 12.6 PPG, has been gradually working himself back into the rotation after returning from his three-game leave of absence on New Year’s Day at Siena.

Daniels played just 17 and 12 minutes in his first two games back, but has played 21 and 30 minutes over the Bobcats’ last two games.

Dunleavy said that part of the reason for Daniels’ 30 minutes of action in the win over Marist was due to junior Abdulai Bundu feeling ill, but it was also a result of Daniels’ activity when he was on the floor. Daniels had just six points on 2-of-5 shooting, but he added four rebounds and two steals.

“[Bundu] just physically hasn’t been himself, and I thought [Daniels] was bringing us really good energy,” Dunleavy said. “I thought his presence at the rim in the zone, he was talking back there, so it was just one of those games. We’ve had some games where guys have big numbers and we just come up short, but this was a game where his numbers don’t reflect how well he played and how much he contributed to us winning.” 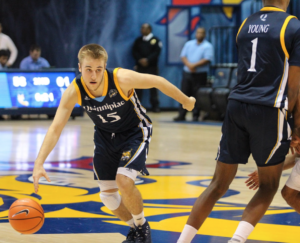 [/media-credit]Aside from Daniels, a pair of freshmen, starting point guard Rich Kelly (10.2 PPG) and reserve forward Jacob Rigoni (7.8 PPG), will be looked upon to step up offensively. Kelly and Rigoni have had flashes of brilliance, but, like most of this team, have been up-and-down all year.

Kelly is sometimes reluctant to shoot the ball, but he does a solid job of keeping his teammates involved, averaging a team-high 5.8 assists per game.

In the win over Marist, Kelly was more assertive, scoring 18 points on 7-for-11 shooting and grabbing five rebounds in a staggering 43 minutes of action. This came after scoring just seven points on 2-for-5 shooting in Sunday’s loss to Saint Peter’s.

“It was back to what we expect from [Kelly],” Dunleavy said after the win over Marist. “I’m excited for him, I’m proud of him, but you can’t be surprised. The thing that I love is that, obviously he had some big baskets for us, but he had five defensive rebounds. And four assists with one turnover, that’s just a big part of our win.”

As a freshman point guard with so much responsibility, it is expected that he would have his highs and lows, but Dunleavy has to be happy overall with how Kelly has handled his first season in Hamden to this point.

While Kelly has been playing to his full potential and getting plenty of minutes, Rigoni is a different story. Rigoni is a player that can only be expected to do more and more as the season progresses, as he had some very intriguing moments on many occasions.

At almost every chance he’s gotten this year Rigoni has been as good as expected. He’s averaging just under 19 minutes per game, but in the nine games that he has played over 20 minutes he is averaging 11.9 PPG. More frequent usage of Rigoni would pay dividends for Quinnipiac going forward.

As Quinnipiac gets into the thick of MAAC play in the coming weeks, it is essential that it finds a consistent second option behind Young. If Dunleavy can find that guy, it will make his life a lot less stressful. For now, however, he is just focused on what he can control.

“We would love to win by (more), but no matter what the situation is you have to take value out of it,” Dunleavy said after the loss to Canisius. “The value we can say is that we’re certainly not uncomfortable playing in a tight game down the stretch.”