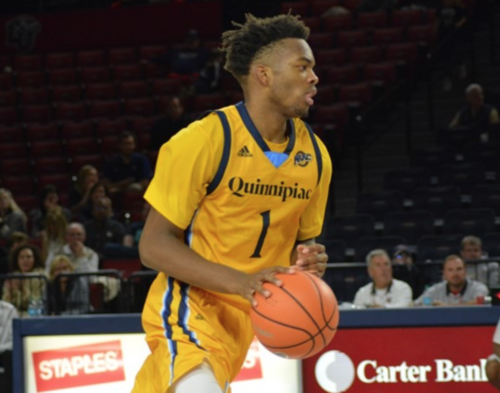 Graduate student guard Isaiah Washington hit a huge 3-pointer with just under two minutes to play to put Quinnipiac (4-9, 1-0 MAAC) ahead 75-68. Freshman guard Rich Kelly hit a pair of free throws with just five seconds left to seal the win for the Bobcats.

While Washington was just 1-for-7 from the field in the game, Quinnipiac head coach Baker Dunleavy kept him in the lineup because of his great work defensively. Washington spent most of the night shadowing Monmouth’s leading scorer, junior guard Micah Seaborn, and held him to just 14 points.

“(Washington) hit a big three for us in that game,” Dunleavy said. “We believe in him and he’s willing to sacrifice his numbers to exhaust himself defensively.”

Monmouth (4-9, 0-1 MAAC) was led by Seaborn and senior guard Austin Tilghman, who had 13 points, eight rebounds and seven assists.  However, the Bobcats did a good job keeping Seaborn and freshman guard Deion Hammond, the Hawks two leading scorers, in check. The pair shot a combined 9-for-19 from the field for just 27 points.

“You just want to limit (Seaborn and Hammond’s) attempts,” Dunleavy said. “We did a good job of shadowing them, staying with them and making it difficult.”

Quinnipiac was led by senior guard Cam Young and freshman forward Jacob Rigoni, as four players scored in double figures. Young was the high-man with 20, while Rigoni chipped in 18 points on 6-of-7 shooting from 3-point range. Junior forward Abdulai Bundu added 11 points and eight rebounds while junior guard Andrew Robinson hit three 3-pointers on his way to 11 points, all in the first half.

Quinnipiac shot 13-for-32 from beyond the arc, including a 6-for-13 performance in the second half which helped them secure the win.

Young, who had three 3-pointers of his own, was pleased with the way he and his teammates executed in yet another closely contested game.

“Those out-of-conference games, of course, you want to win them, but I think that they get you prepared for situations like this,” Young said. “We were in a close one tonight, so I think those losses had us more prepared and had us more focused on the details that we needed to win this game.”

Young is the Bobcats leading scorer at 16.2 points per game, but Dunleavy was impressed with his rebounding tonight, especially because one of his eight rebounds helped give the Bobcats an extra possession with just 23 seconds left.

“We talk about growth all the time, and I think [Young’s] a guy that, since June, has probably had as much growth as anybody,” Dunleavy said.

Another guy that Dunleavy wants to see continued growth from is Rigoni, who has scored in double figures in back-to-back games for the first time in his young career. 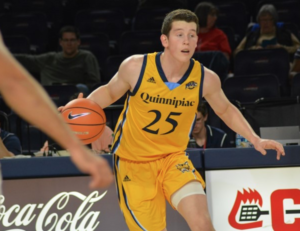 [/media-credit]“[Rigoni’s] a really good shooter, but what I don’t want to happen to him is to fall into that label of shooter,” Dunleavy said. “He’s so much more and that’s what we’re gonna hold him to, that’s where we’re going to push him and be really hard on him because we need even more out of him.”

Rigoni and Andrew Robinson provided a big lift off the bench for Quinnipiac, hitting a combined 9-of-14 3-pointers. Rigoni attributed his big game to staying confident in himself, but also him teammates.

“The team does a good job of getting each other open,” Rigoni said. “It doesn’t matter who’s scoring the points.”

Quinnipiac entered conference play on a three-game losing streak, but was able to flip the script against a Monmouth team that was ranked third in the MAAC preseason rankings.

“Monmouth is an extremely well coached team, they’re not just a team, they’re a program,” Dunleavy said. “They’ve established themselves in our league and they have terrific players and a great coach, so beating them whether your home or on the road is a difficult task and we’re proud to do it.”

Quinnipiac will look to build on tonight’s win this coming Monday as they travel to Albany to take on Siena.