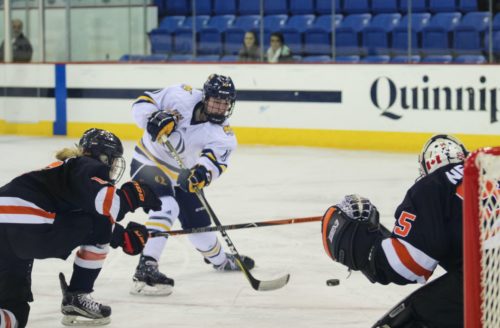 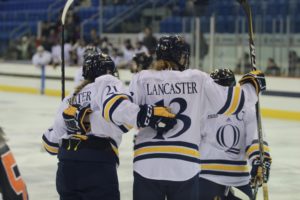 After the Bobcats were shutout on Friday night at Princeton, the offense was alive and well on Saturday as three different scorers found twine in three separate periods. Sophomore forward Kenzie Lancaster, freshman forward Taylor House and freshman forward Brooke Bonsteel all scored for the Bobcats, while sophomore goalie Abbie Ives made 27 saves in the win.

“We’ve grown as individuals, we’ve grown as a group in so many aspects,” Quinnipiac head coach Cass Turner said. “I think today was a good highlight of where we’ve come and there’s some excitement in things we can do moving forward into the second part of our season.”

Just 2:55 into the game, Lancaster scored her fifth goal of the season. Junior forward captain Melissa Samoskevich carried the puck into the corner, threw it on net and found Lancaster’s tape off of a rebound in front.

Shortly after the goal, Princeton came into Quinnipiac’s zone on a 2-on-1, but Ives made a flashy split save to keep the game at 1-0. Princeton controlled play for the majority of the first period after that, but Ives stayed consistent, stopping all 14 shots that came her way in the opening frame.

“Even if they’re just normal everyday saves, they’re huge, but some of those [bigger saves] ones were huge,” House said of Ives’ stellar play early in the game. “That kept us in the game and we could’ve been down a goal if she didn’t make some of those saves.”

In the second period, Princeton was able to beat Ives just 3:57 into play, when Princeton’s Kimiko Marinacci found Sharon Frankel (a West Hartford native) in front for an easy tap-in. Her second of the season tied the game at two, but it didn’t last long. 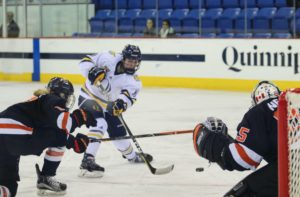 [/media-credit]About five minutes later, senior defenseman Shannon Cherpak took an interference penalty to put Princeton on the power play. Rather than Princeton scoring on that power play, Quinnipiac scored its first shorthanded goal of the season to take a 2-1 lead.

Sophomore forward Kenzie Prater skated across the blue line on a 2-on-1, put the puck on net and it hit House’s skate and went in.

The Bobcats took the lead into the third period, but there was no scoring until Bonsteel potted her seventh of the season on a power play at 15:16.

The freshman corralled a rebound in the slot and made no mistake to put Quinnipiac up 3-1 with less than fives minutes left in regulation.

“I didn’t come in here thinking I’d have as many points as I did, I’ve never been a player that has racked up points,” Bonsteel said. “But I just think that the way this team plays, it compliments my game so much.”

Quinnipiac closed out the contest to improve its record to 11-8-2 overall and 7-5 in ECAC play.

Next up, the Bobcats welcome Team Korea to Hamden in an exhibition game on Dec. 28.