Cait’s Column: Quinnipiac needs its offense to step up against Maine 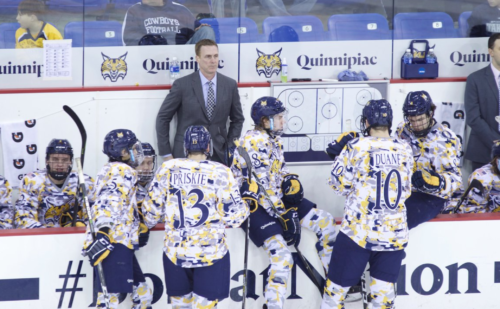 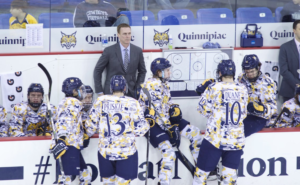 [/media-credit]“We can’t seem to buy a break right now… Sometimes the puck doesn’t go in the net, sometimes it goes in all the time for you. That’s the way it works.”

On paper, it seems mind-boggling that a team can consistently put up around 35-40 shots on any given night and can’t find a way to finish. However, Quinnipiac’s issue of finding consistent offensive production isn’t just about getting bounces anymore.

In the mid-October, I said that Quinnipiac’s goal scoring would improve as the season progressed after they scored just four times in three games against Hockey East opponents, despite mustering an average of 30 shots per game.

Evidently, the team hasn’t improved in that regard, as told by one of the nation’s worst shooting percentages (7.2).

In early November, I suggested that while they had been creating chances, a core group of upperclassmen forwards that had yet to start putting the puck into the back of the net would eventually do so, based on their stats from previous years.

Now 16 games into the season and that group has continued to be stagnant. Their average points per game totals have dropped by 0.23 compared to last season. 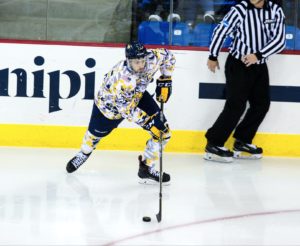 [/media-credit]But it was clear from the get-go that this Bobcat team wasn’t as skilled up front as previous teams have been. The only way for the forwards to work around that and generate scoring chances, was to stick to their systems and create their own opportunities as a collective.

After the loss to Dartmouth, in which the Bobcats put up 43 shots and no goals, junior captain Chase Priskie noted that finding ways to put the puck in the back of the net doesn’t entail strictly skill plays.

“The biggest thing all year for goal scoring is getting to the front of the net,” Priskie said. “You’ve got to play in the dirty areas if you want to score goals and we just didn’t have enough of that.”

Pecknold mentioned a similar observation from the night prior, in which Quinnipiac recorded 43 shots and just two goals against Harvard.

“Ultimately I think if we work harder, get bodies to the front for screens and stuff like that — we didn’t do a very good job of that tonight, it’s been an issue — we’ve got to commit more to screening the goalie, blocking shots, things that are true to our identity,” Pecknold said.

With that being said, Quinnipiac’s PDO (the sum of a team’s shooting percentage and save percentage) has proven to be very unlucky this season. Based on that, the bounces will most likely come as the season continues, but it won’t save this team by any means. 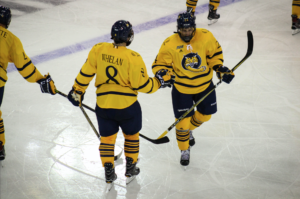 [/media-credit]Heading into this weekend against Maine, the focus should not be diverted to which of the two capable goalie gets the start in net. It shouldn’t be about the d-core struggling to prevent chances (Quinnipiac is the seventh-best team in the nation in terms of shots on goal against per game [26.38]).

The main point of emphasis, as it has been for the majority of the season, should continue to be on the forwards’ inability to efficiently put pucks on net, play a full 60 minutes rather than coming alive late in a third-period-desperation mode and most importantly finding find ways to finish.