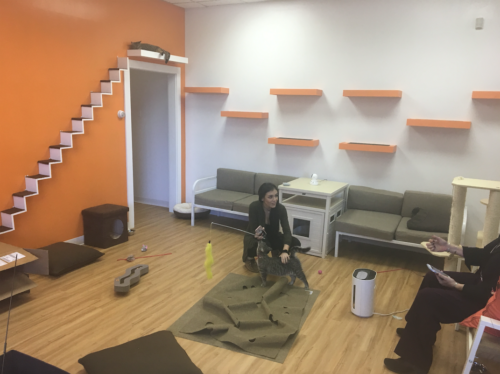 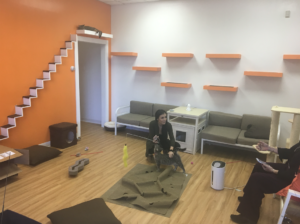 [/media-credit]Mew Haven Cat Cafe is the ‘purr-fect’ place to get some work done alongside some new furry friends. This cat cafe is a coffee house with adoptable cats. Located at 904 Whalley Ave. in New Haven, the two-week pop-up will stay open until Dec. 13. The real opening will be in the spring, after construction is completed, according to Angela Pullo, the owner of Mew Haven Cat Cafe. Before visiting the cafe, it is recommended to make a reservation for all party guests. During the time slot chosen, customers can play with the cats for up to 55 minutes. Whether looking for a different study spot, some tasty treats or a new cat to bring home — this cafe is the place for you. The pop-up event does not offer coffee and other treats, however, this will be a feature that the official opening of the store will contain

Pullo opened the first cat cafe in Connecticut with the mission of bringing awareness to cats. Thailand originated the first ever cat cafe in 1998, with stray cats that were on the streets.

When these cafes came to the states in 2014 adoption became an option. “The cafe makes people more aware of cats,” said Pullo. “Cats are friendly, great pets. To have this space lets people see how it is to be with cats, and possibly adopt.”

Pullo said the cafe’s mission is three-tiered. To provide a foster home for the cats, for the people and the community.

“I wanted to find a way to bring people together,” Pullo said. “For the people who can’t have cats, but need cat therapy.”

[/media-credit]The five cats at the cafe currently are named Rizzo, Sandy, Sunny, Hanger Steak and Chicken Cutlet. They range in age from five months to about a year old. These cats were sent over from Animal Haven, who partnered with Mew Haven in hopes of speeding up the search for a forever home.

Even if people do not like cats, it is shown that playing with cats can help cope with stress.

According to the website, Mental Floss, Cats in particular lower your stress level, and can lower the amount of anxiety in your life.

There is no rule that people need to adopt the cats, but visitors cannot forget the rules that help keep the cats in a healthy and safe environment. While in the lounge, there are six rules: 1. Be gentle and don’t pull at the cats.  2. Pictures are allowed, but no flash photography. The employees and owners do not want to disturb the cats at any time. 3. Do not wake the cats, let them sleep and enjoy their relaxation. 4. Do not feed the cats any food. 5. Cats must stay in the lounge. 6. Children under the age of 13 must be with an adult.

Sophomore Chloe Devanny visited the pop-up and it changed her mind on cats.

“Before I visited Mew Haven, I was not really a big fan of cats,” Devanny said. “After meeting these five cats here and seeing how cuddly they are, cats are starting to grow on me.”

This cafe could be a place for all people. Whether people like cats or not, the way the cafe is set up is made to calm everyone down. 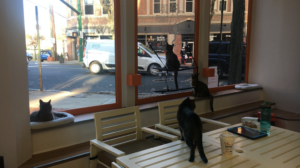 [/media-credit]Pullo set up the cafe to be white and orange. As people walk into the lobby, the walls are orange, but they are white inside the lounge.

“My husband, Michael, his cat was orange, so we went with orange everything,” Pullo said.

Although the orange has more of a sentimental value to the owners, it also is a color to help the brain. Orange is known to refresh people when they are feeling down.

Students get a $2 discount when they show their student ID, so anyone can spend $10.76 to spend 55 minutes with cats to help them study.