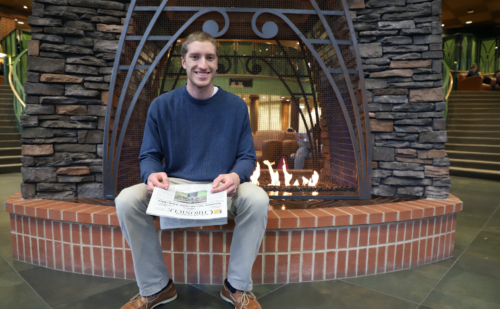 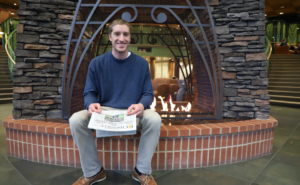 [/media-credit]A few issues back, one of our sports staff writers hopped into the news section and wrote a piece on Frederick Raudat, a QU201 and QU301 professor who has Crohn’s disease. Our writer delivered an excellent feature, but a copy editing error on behalf of our e-board reminded me of why I joined the Chronicle and just how much the organization means to me.

The article, titled Crohn’s Silver Lining, discusses how Raudat shattered his fundraising goal for combatting the disease. A reader would not get that sense from our sub-headline, though.

Nope. That blurb reads, “Professor starts fundraiser for Chron’s disease and Colitis.” A majority of our editors did not catch the misspelling until we were sitting roundtable a day after the paper printed. There were some laughs and some cringes for letting an error like that slip into the issue, but I couldn’t help recognize the coincidence in the mistake.

It is more than a fluke that we let “Chron” slip into the paper. Those five letters are so ingrained into our editors and members that factual correctness cannot overcome them. While accuracy and correctness are essential attributes to the work that we do, seeing that blip in the issue helped remind me just how important the Chronicle has been to my collegiate journey.

I’ve been with the Chronicle since my first week on campus, knowing that it would give me a platform to become a better sports writer. After covering three national championships, reporting from the press box at the world’s most famous arena and recounting the tales of Quinnipiac athletes across sports, I would say my freshman intuition was spot on. What I didn’t fully realize is how many other doors the paper would open for me through the people I’ve met.

The Chronicle gave me a chances to move into greater leadership roles, some much sooner than I anticipated. Within my first few semesters, I had a hand in publishing other members’ talented work and have since garnered more responsibility for the overall function of the organization. I am proud of what we’ve accomplished over the years between writing, design and photography. As much as it was important for me to monitor other members’ pieces as an editor over the years, their work and perspectives helped me grow just as much.

In my time with the paper, I’ve found that learning doesn’t stop when you start leading. As one of just a handful of members to have been here since the fall of 2014, I have seen how great our members are at all levels. I looked up to many of my editors and know that the people making their way through the organization could feel similar admiration towards our current upperclassmen. Even as a veteran of the paper, I still look up to my fellow editors as they continue to fight the good fight through their reporting and help me improve as a person.

The Chronicle is a club that’s so important to us that we often cannot escape its perpetual grasp, and deep down know we don’t want to because it allows us to be together. As I entered my final weeks as an undergraduate there was something about that little spelling error reminded me just how much of an impact this paper has had on all of us, especially as my tenure nears its deadline.

I hope everyone finds their Chronicle somewhere at Quinnipiac. The journalistic aspects alone have been priceless to my time in college and my professional aspirations, but those pale in comparison to having a second family at school. The Chronicle allowed me to be my best self, and I’m thankful to those who have let me accomplish that.