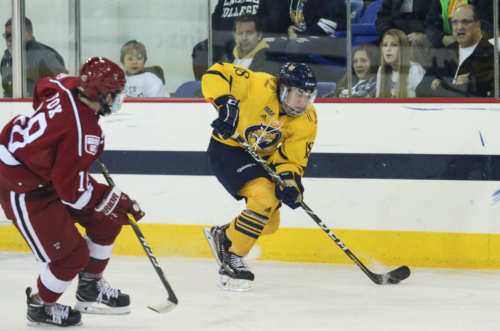 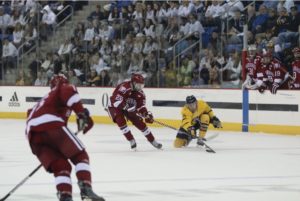 After an overwhelming 6-3 victory at Princeton this past Tuesday, the Bobcats outshot their opponent (again) 43-30, but were unable accomplish the always-challenging task of scoring goals.

While Quinnipiac is a top 5 team in the nation in terms of shots on goal per game (37.24), its ability to execute is evidently lacking, as shown through its tied-for-bottom-5 shooting percentage (7.8) through 15 games this season.

But despite the imperfect numbers, Quinnipiac head coach Rand Pecknold made the lack of mental preparation that goes behind playing a talented team like Harvard, a point of emphasis following the loss.

“We had 24 turnovers. That’s just bad hockey, just guys not ready to play and disappointing,” Pecknold said. “Give Harvard credit, they were good, but we just struggled to get out of our own way the rest of the night. We couldn’t find a way to reload and be better.” 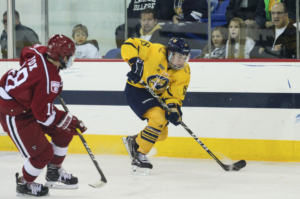 [/media-credit]What ended up being a “bad hockey” game for the Bobcats, didn’t begin that way.

Quinnipiac skated with the Crimson and netted the first goal of the game just under four minutes into the game, when freshman forward Matt Forchuk showcased his vision to find sophomore forward Nick Jermain’s tape in front of the net.

But shortly after that, the wheels began to fall off the wagon. Harvard’s first goal from defenseman Wiley Sherman (Boston’s 2013 fifth-round pick) came off of a point shot just three minutes later.

Then about two minutes after that, Crimson forward Ryan Donato (Boston’s 2014 second-round pick) put his raw talent on display to push his team ahead 2-1. Donato stripped the puck from junior defenseman John Furgele in Quinnipiac’s own zone, dangled his way from below the goal line, to the too of the crease, then slid the puck under sophomore goalie Andrew Shortridge for his first of the night.

From there, Crimson forward Lewis Zerter-Gossage sniped a shot with traffic in front to bring the game to 3-1 with just under four minutes left in the period.

Despite keeping up with the quick and physical pace of the game, the Bobcats were unable to play responsibly on both ends of the ice.

“I think the battle level was good, I just think defensively we weren’t all there,” freshman forward Odeen Tufto said. “Slow pucks, a lot of turnovers — especially in the first period — we had 24 in the first period and I think we were just lazy at times.”

The second period contained no scoring, but showed Harvard’s ability to shut a team down offensively. While Quinnipiac outshot the Crimson 12-7, just four of those came from high-scoring areas.

“We’re taking some shots from 30-40 feet out with no net-front traffic and just hitting the logo,” Pecknold said. “… Ultimately I think if we work harder, we get bodies to the front for screens and stuff like that. We didn’t do a very good job of that tonight. It’s been an issue.” 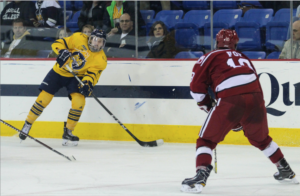 [/media-credit]However, in the third period, Quinnipiac found the back of the net first, at 7:45 in the frame. After buzzing around the net all night, senior forward Tanner MacMaster potted his fifth of the season to revitalize the Bobcats on the scoreboard.

But less than two minutes later, Donato scored his second of the night on a wraparound attempt that found its way to the back of the net after it hit Shortridge’s pad.

Once again for the Bobcats, an uphill battle created a sense of urgency late in the third, but they were unable to get any goals past Harvard goalie Michael Lackey.

As Shortridge was pulled with 3:22 left in the third, Donato sealed the deal shortly after on a long empty-netter for his third of the night, seventh of the season and a 5-2 lead.

“He’s a really elite player,” junior defenseman captain Chase Priskie said of Donato. “He’s great on his feet, great hands, great playmaking and a better shot. When you know he’s out there, you’ve got to give him no time and space, and tonight we gave him [that] and he capitalized.”

With Shortridge back in the net, Harvard forward Seb Lloyd added salt to the wound with his first of the season and a solidified 6-2 win for the Crimson.

Next up, Quinnipiac welcomes Dartmouth to Hamden on Saturday night in hopes of earning a hard-to-come-by ECAC win.

“Usually we’re great out of the gate and we’ve got some guys who’ve done it in the past for us, not doing it now and we’ve got some freshmen that are struggling to get on board with that,” Pecknold said. “Again, give Harvard credit, I thought they were good tonight, and we tried to shut down Donato and obviously did a really poor job of that… we’ll reload here and get ready for Dartmouth.”