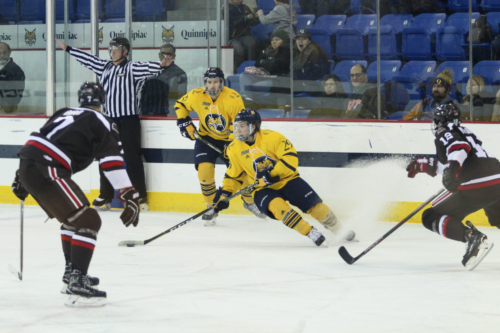 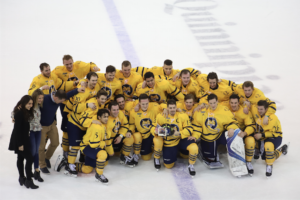 [/media-credit]“If the guys are going to buy-in like they did tonight and last night, we’re going to win a lot of games this year too,” Pecknold said.

It was packed, it was loud and it was a highly competitive contest.

Add a win to the aspects above, and the ‘Yale Game’ was everything a Quinnipiac Bobcat fan could ask for. Especially after the way Quinnipiac started conference play.

After coming out flat in their first four ECAC games, the Bobcats looked like themselves again last weekend at home against Brown on Friday and then Yale on Saturday.

On top of their consistent offensive pressure, the Bobcats finally found the back of the net this weekend, piling up eight goals in two games.

Oh, not to mention Andrew Shortridge, the ECAC Hockey Goalie of the week and NCAA hockey First Star of the Week, also recorded back-to-back shutouts for the first time in his collegiate career.

“I thought he was our best player…shutouts are tough to come by, so we’re happy for him,” Quinnipiac head coach Rand Pecknold said of Shortridge’s play.

But while the team as a whole clearly improved from weeks prior, it becomes easy to lose sight of the other areas in which the Bobcats excelled in after what is considered Quinnipiac’s biggest hockey weekend. 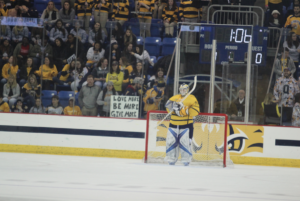 [/media-credit]While Bobcat fans are surely pleased with their team’s weekend sweep, have they really turned the corner on what was a subpar start to conference play?

For starters, the Bobcats made progress in improving their conference record from 0-4 to 2-4, good enough to climb out of 12th place (dead last) in the ECAC and into 10th place. They also finally received much-needed goal scoring from the players that are looked upon to score on a consistent basis.

Landon Smith recorded his third-career hat trick, both Tanner MacMaster and Craig Martin scored their third goals of the season and — after an injury, then time as a healthy scratch — Thomas Aldworth got the monkey off his back with his first of the year against Yale.

But while the positives seem overwhelming, it’s important to note other factors.

The Bobcats outshot their opponent in all of six periods last weekend, but similar to the way the season as a whole has gone altogether, had trouble finishing considering the amount of shots taken.

Of its 11 games this season, Quinnipiac has scored in multiple regulation periods just five times (Boston Univ., Northeastern [2], Brown and Yale) despite outshooting the opponent all but twice.

Additionally, while Ivy League teams start the regular season slightly later than other schools, coming into the weekend, both Brown (18 goals) and Yale (19 goals) were near the bottom of the nation in terms of goals for and respective power play percentages.

They were also tested mentally, — Yale in particular — going up against electric Quinnipiac crowds.

[/media-credit]On Friday and Saturday, the Bobcats return to action with a home-and-home against a similar opponent in UMass Amherst.

It’s safe to assume the defense and goaltending will continue to be relatively stellar, but if Quinnipiac’s secondary scoring (for lack of a better term) can keep producing at the rate it has been, the Bobcats will likely be back on the right track after a lackluster start of the season.

The Minutemen will be a nice test for Quinnipiac to see how consistent this team really can be.

“We’re not used to losing games at home, or anywhere,” Pecknold said. “So it was a good weekend for us, happy for the boys and hopefully we can build off of this.”