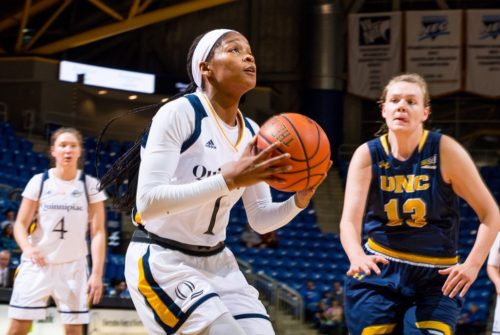 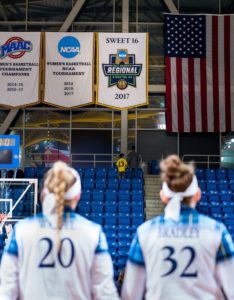 [/media-credit]But before the game started, a banner commemorating Quinnipiac’s Sweet 16 run from last year’s historic season was unveiled for all in attendance. However, for the Bobcats, it was clear that the focus was on the game at hand, rather than reminiscing about past accomplishments.

“It feels good,” junior forward Paula Strautmane said, “But even talking in the locker room, it was about last season.”

Despite Quinnipiac’s well-rounded effort, the team got off to a shaky start.

The Bobcats shot 0-for-7 from the field and 0-for-5 from 3-point range, en route to going down 10-0 in the early minutes of the first quarter. Strautmane finally put the Bobcats on the board when she hit a layup to make the score 10-2.

Despite the ice-breaking basket, the rest of the first quarter was a battle till the final seconds of play. Literally.

Bears’ guard Savannah Smith hit a buzzer-beating 3-pointer to give Northern Colorado a 19-5 lead going into the next quarter.

Early in the second frame of play, senior guard Carly Fabbri got the Bobcats rolling with a layup that began a 17-7 run. Six different players scored points during the run and ultimately brought Quinnipiac’s deficit to 28-22 heading into halftime. 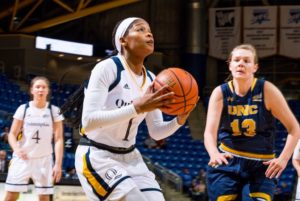 [/media-credit]“We weren’t looking how we were in practice that last couple of days,” Quinnipiac head coach Tricia Fabbri said. “It wasn’t translating, but we needed to just take a deep breath, relax and find a way to get back into the game.”

And that is exactly what the Bobcats did from the get-go of the second half.

Fay opened up the third quarter with an and-one to energize her team. Then Udoji scored eight straight points to give the Bobcats their first lead of the game, 37-35.

“[There was] nothing really going through my mind,” Udoji said of her run. “Just finishing, going strong and knowing what I was doing was for my teammates.”

From that point on, Quinnipiac didn’t look back.

The Bobcats opened up the final quarter of play by going on a 9-0 run and increasing their lead to 49-37 until Bears forward Courtney Smith made a layup at 6:26 to break up the offensive spurt.

Northern Colorado came back with its own 9-0 run, following Smith’s bucket, to bring the score to 49-44, but it wasn’t enough to come back in the game. 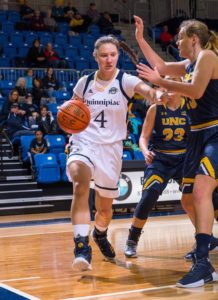 [/media-credit]Quinnipiac held onto its lead and went on an 11-5 run to close out the game and earn its first victory of the young season.

“Feels good to win, to get the first one under your belt,” Fabbri added. “…Obviously it’s been well-documented who we’ve played in our [first] three games and how well we’ve played for three quarters, but it feels really good to get a couple of days at home, over Thanksgiving with a ‘W’, that’s for sure.”

Next up, Quinnipiac hosts Dayton on Nov. 28 in hopes of adding more numbers to the wins column.