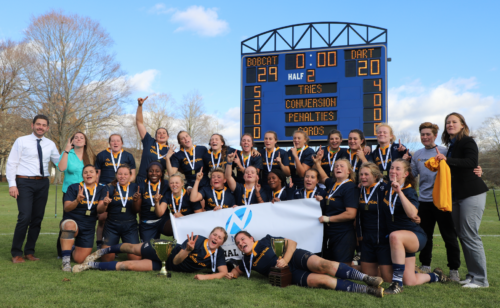 The Quinnipiac rugby team belted that appropriate chant after defeating the top-seeded Dartmouth Big Green, 29-20, at the Quinnipiac Rugby Field on Sunday afternoon to seal its third straight national title.

“I think this is something that has been on our minds all year,” Quinnipiac head coach Becky Carlson said. “We tried to push it away a little bit. The words ‘three-peat’ kept popping up in everybody’s language and we kept just having to say ‘game by game.’ That wasn’t an easy thing to do.”

Just as the Bobcats avenged a regular season loss to Central Washington in the NIRA semifinals on Friday, Quinnipiac got back at Dartmouth for a loss in Hanover, New Hampshire on Sept. 9. Carlson says that loss loomed large over Quinnipiac throughout the season as the team placed a giant picture of the scoreboard from the first matchup in its locker room. 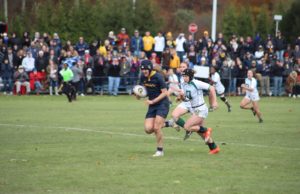 [/media-credit]“After the game, I said, ‘Take a good, hard look at that,’” Carlson said. “And we knew the only way to get back to them and actually have some kind of recourse was to see them in the playoffs and it just ended up being the championship, so it was poetic.”

Similar to the first matchup, Dartmouth jumped out to an early lead with consecutive tries.

Quinnipiac senior Ilona Maher answered with a try, but Dartmouth countered right back with one of its own to make it a 15-5 contest in the first half. Like other adversity the team has encountered over the last three seasons, the veteran Bobcats preached determination in overcoming Dartmouth.

Sophomore Mikah Maples took a pass from Maher and drove in for her first try of the game before Maher ran in her second of the contest. Maggie Wesolowski’s successful conversion gave Quinnipiac a 17-15 advantage and a lead it would not relinquish.

“There wasn’t a moment when I didn’t feel like we weren’t going to win, but we really had to glue some stuff together,” Carlson said.

Maples scored her second try early in the second half to put the Bobcats up 22-15, seven minutes into the second half. Senior Tayler Schussler gave Quinnipiac a two-score edge as she juked a Dartmouth defender and dove into the try-zone midway through the half. 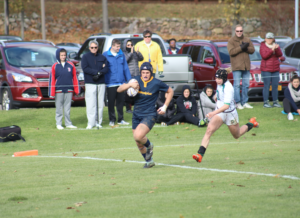 [/media-credit]The Big Green earned a try with nine minutes to go, but the Bobcats held strong for the remainder of the contest to hold on, 29-20, and claim its third straight national title.

Following a season in which the Bobcats were competitive nomads without a field to call home, the team capped off a perfect season at the Quinnipiac Rugby Field in the title game. The team finished 8-0 in Hamden on the year and appreciated just how crucial the home-field advantage was.

“I think that push really let us know that no one was going to step onto our pitch and was going to beat us ever,” Schussler said. “Ever.”

After the game, Maher, the reigning national player of the year, was named the tournament’s MVP. Since transferring from Norwich as a freshman, Maher has been a driving force in Quinnipiac’s success.

While she says the decision to move on from Norwich her first year was a difficult one, she says she has no regrets with her Quinnipiac journey. 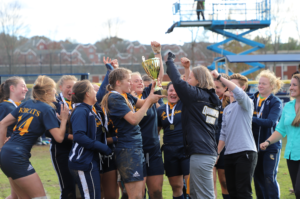 [/media-credit]“I think it’s the best decision I’ve made” Maher said. “I would do whatever I needed to do to get back to where I am now.”

Carlson credited the NIRA with helping promote the sport better through social media and live streaming the championship game.

While she drew similarities between her team and UConn women’s basketball as the Bobcats have only lost five games in its quest for three championships, the Bobcats say their dominance has made a positive imprint on women’s rugby.

“I think [the championships are] less important than what we’ve done for the sport here,” Carlson said.