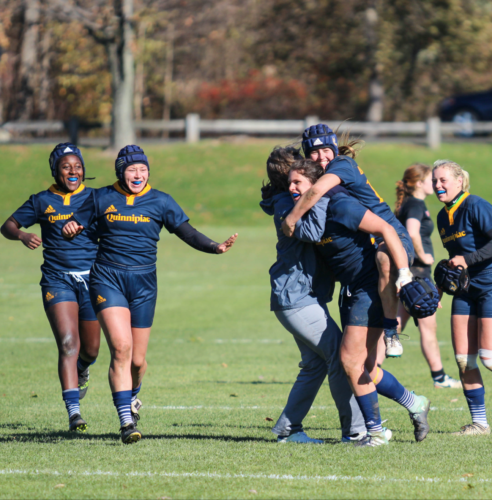 Things weren’t looking so good for the No. 2 Quinnipiac rugby team as it was trailing 26-14 after No. 3 Central Washington scored nearly halfway into the second half. 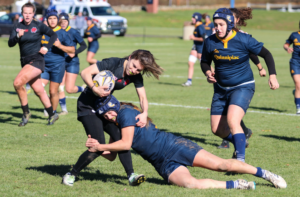 [/media-credit]But that would be the last time the Wildcats scored on Friday morning. The Bobcats put up 12 straight points in less than four minutes and ended up closing the game on a 27-0 run to advance to the NIRA championship game for the third straight year with a 41-26 win.

The win means that the Bobcats are one win away from a three-peat and have the chance to win a title in front of a home crowd as the school is hosting this year’s final four.

“I think that anybody who was watching that game — hopefully a lot of people did watch that game — I think that it was a fantastic display of rugby on both sides,” Quinnipiac head coach Becky Carlson said. “That’s the kind of thing we want in our league.”

Senior wing Rebecca Haight started the run for the Bobcats as she fought through a scrum on the right side of the field and found her way into the try zone for five points in the game’s 65th minute. While senior eight Margaret Wesolowski was unsuccessful on the ensuing conversion, Haight laid on the field for a few minutes before getting off on her own power. There’s no word on her health status.

“Whenever one of our players goes down, we are just almost pissed because someone would hurt teammates,” senior center Ilona Maher said. “…We let that fuel ourselves. When someone gets a good tackle we let that fuel us, when someone has a great run. We try and take every little moment and have that fuel our fire.”

Just moments later, sophomore center/lock Mikah Maples got her second try of the game with a 65-yard run up the middle of the field. Maples’ try was unassisted and Wesolowski hit the conversion to tie the game at 26.

And then with 12 minutes left, reigning national player of the year Ilona Maher began to take over the game as she got her second try after shedding off a few Wildcats. Maher’s second try of the game put the Bobcats up 31-26 as Wesolowski’s conversion was no good.

As the Bobcats were nearing the Central Washington try zone with around five minutes left, they elected to add three points on a penalty kick from Wesolowski to go up 34-26 instead of going for the try.

“Once we knew we had the opportunity to be up two scores, why not take it?” Carlson said. “…We knew that Maggie (Wesolowski) could make that kick.” 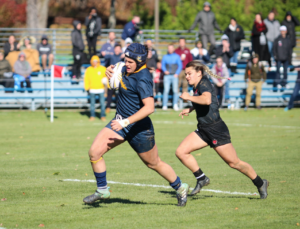 [/media-credit]But Quinnipiac would get another try as Maher scored for the third time of the day with a long run down the center of the field just a minute left after the Bobcats scored on the penalty kick. The conversion from Wesolowski would put the Bobcats up 41-26 with just a couple of minutes and a little bit of extra time to play, securing a berth in the title game.

“I feel like sometimes the NFL should be looking at Ilona Maher,” Clarkson said. “She’s steady, she’s sturdy. You want the ball in her hands absolutely to make those big finishes. But more so, I think when the opposition lines up against Ilona, everybody’s looking at her. I think that opposition lining up against Ilona and being more concerned about her opens up the field for players like Mikah.”

Additionally, senior fly half Flora Poole had two assists in the win while Wesolowski and freshman wing/sky half Destiny Henry each added an assist.

The matchup between Quinnipiac and Central Washington has arguably been the top rivalry in women’s rugby as the two teams met in last season’s championship, in which the Bobcats came out on top. The Wildcats have defeated the Bobcats in each of the last three seasons in the regular season as they were one of just two teams to beat the Bobcats this year with a 31-22 win on Oct. 7 before the Bobcats got revenge on Oct. 22 with a 29-24 win. 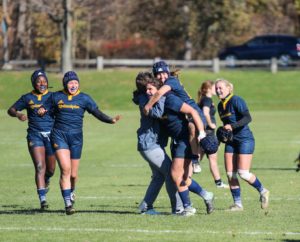 [/media-credit]“It just feels good,” Maher said on beating Central Washington in her last game against the team. “They’ve been a big competitor throughout my years here. We lost to them in the past (few) years. We beat them in the championship but to beat them again twice this season I think just shows the hard work we put in.”

The Bobcats will face the winner of the No. 1 Dartmouth vs. No. 5 Harvard game on Sunday at noon for a chance at a third straight title as the tournament stays at Quinnipiac.