Just Dewey: When will the mass shootings end? 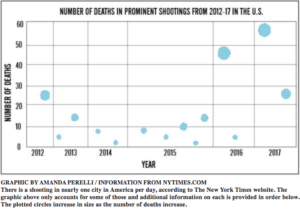 After hearing the awful news that 26 people were killed in a church just outside of San Antonio, Texas on Nov. 5, I had one question: Why are mass shootings so common in the United States?

Since 1966, there have been 132 events in which four or more people were killed by a lone shooter, and three others in which two shooters were involved. To break this down even more, in 2012, the New York Times found that from 1966 to 2012, the United States had 270 million guns and 90 mass shooters, according to a study done by the University of Alabama.

No other country in the world had more than 46 million guns or 18 mass shooters, according to the study.

Yes, we have the right to bear arms in the United States. Other countries, such as Australia, Great Britain and Germany, have much stricter gun laws than us.

But the fact is, these countries have fewer mass killings. Australia hasn’t had a mass shooting since April 1996. Germany improved its gun control laws after the Winnenden school shooting in 2009, which left 16 people dead and nine others injured. Germany has only had one mass shooting since.

The United States gun control laws simply make it too easy for people who should not possess guns to obtain them.  While many people believe strongly in the Second Amendment as a personal right, I wonder if it is worth the cost of human life?

In the past 50 years, 974 people have been killed due to mass shootings. The Washington Post found that 153 of that 974 were children and teenagers, with the youngest victim being just 8 months old.

To make matters worse, after Devin Patrick Kelley’s actions in Texas on Nov. 5, the United States now has six of the 18 deadliest mass shootings in the world since 1980, according to Adam Lankford a criminology professor at the University of Alabama. With the Texas church shooting, two of these shootings have now occurred in the past two months alone.

The situation isn’t improving; it’s getting worse. While other countries have tightened gun laws after these horrific incidents, the United States has continued to brush the issue under the table, only for it to come up again and again.

There has to be some middle ground where gun enthusiasts are willing to sacrifice some of their freedom to bear arms in order to make sure these weapons aren’t getting into the wrong hands.

Five years before the massacre, Devin Kelley had escaped a behavioral facility near El Paso. The officers who responded to the situation were told at the time that Kelley was “a danger to himself and others,” according to the Washington Post. Kelley had also been court martialed while in the Air Force, had been convicted on domestic violence and animal cruelty charges and had known mental health concerns.

Yet, because of the United States gun control laws, Kelley was able to purchase four guns, two in Colorado and two in Texas, states in which the National Rifle Association (NRA) categorizes as “Shall Issue.”

The NRA considers “Shall Issue” to be “State law that provides that, upon completion of specified requirements, a law-abiding person shall be granted a permit to carry concealed firearms.”

Kelley was far from a law-abiding citizen. The red flags were there. So how was he able to get a firearm, never mind four of them?

Kelley matches the Washington Post’s study that has found that in the 135 incidents of mass shootings over the past 50 years, shooters have brought an average of four weapons to the shooting. 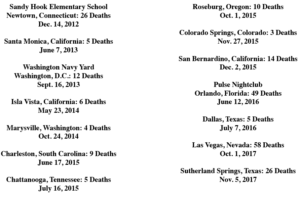 This follows another concerning trend, that there are more guns than people in the United States. Compared to other developed countries, we have more than 100 guns per 100 people, while no other country surpasses 40.

When states are allowing people like Kelley to easily purchase multiple guns despite their history, it’s a recipe for disaster.

Yet, our politicians continue to insist this isn’t an issue of gun control, but rather mental health. President Trump called the Texas shooting, “a mental health problem at the highest level, not a guns situation,” according to The New York Times.

Part of that is true. It is a mental health issue. And yes, guns don’t kill people, people kill people. But it becomes a gun issue when you are allowing people who should not be able to possess any deadly weapon to obtain as many firearms as they desire.

It becomes a gun issue when the most common method of mass killing in the United States is the use of guns. It becomes a gun issue when most of these guns are obtained legally. Of the 274 guns used in mass shootings, the Washington Post found that 164 of them were legally purchased. Only 42 were obtained illegally and the remaining 58 are unknown.

The President, the NRA and pro-Second Amendment party can continue to preach that guns aren’t a problem, but it just simply isn’t the case. We’ve seen other developed countries tighten up their gun laws and it has worked.

How many more incidents is it going to take?

How many more innocent victims?

How many more children and young adults are going to unfairly lose their lives before we change something?

We don’t have to completely give up the freedom to bear arms, we have too many guns circulating already to do that, but at least changing the law so background checks become more thorough and people cannot just purchase guns as they please is a start.

If giving up some of our freedom to possess guns means that lives can be saved and this mass shooting epidemic can be put to a stop, I am all for it.

It’s simple: Preserving human life is more important than being able to own a gun.

In the past 50 years, 974 people have fallen victim to mass shootings in the United States. I think we owe it to them, their families and their memories to not let others suffer the same fate.