QU shops ‘til it drops 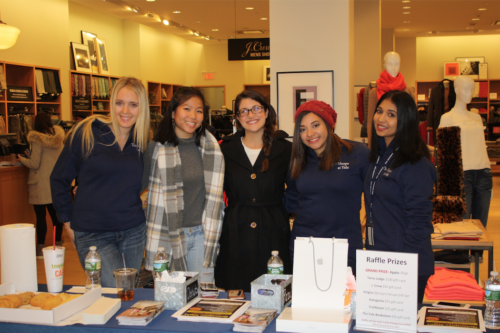 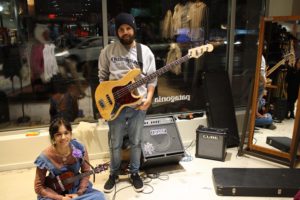 [/media-credit]Although temperatures plunged below the freezing mark this past Friday, ever-hardy Quinnipiac students braved the cold for an evening of exclusive retail discounts in New Haven.

The first ever Quinnipiac Night, organized by The Shops at Yale, served as an experiment to see whether or not students would trek to Broadway for savings at local vendors.

Discounts could be found throughout a wide scope of retailers along Broadway and York Street, including 20 percent off at J.Crew, free churros at Tomatillo and free facials at Origins.

Participants pre-registered online before the night, and signed in at J.Crew where they received wristbands and a coupon booklet.

By the end of registration, 66 students arrived, a little over a quarter of the 200 students who signed up online.

“We wanted to do something for Quinnipiac students to expose them to the area, and hopefully they’ll come back,” Marketing Manager of The Shops at Yale and Yale University Properties Natashya Fernando said. “The merchants loved participating with students; it took no convincing.”

Fernando explained that a month ago, The Shops at Yale decided to test the waters with events targeted at specific schools, in addition to the pre-existing college nights that encompass all surrounding universities. Two marketing interns at QU have been handling promotion leading up to the event.

Fernando was more than satisfied with the turnout, as her goal of 50 attendees was more than met. The attendance goal was lowered to 50 because of the wintry temperature and gusty winds.

“When I saw the weather, I was like ‘Oh my god that’s so cold,’” Fernando said. “I wasn’t sure anyone was going to come at all, actually.”

Rachael Emond, a sophomore nursing major, was one of the 66 not afraid to bare the cold.

“I saw the event on Facebook and it had a bunch of discounts, and I thought ‘why not?’” Emond said. “I think a lot more people would’ve come if it were warmer, but I think it will still have a good showing.”

Jennifer Lee, a sophomore public relations major, was another that didn’t let a little cold weather stop her from retail therapy. 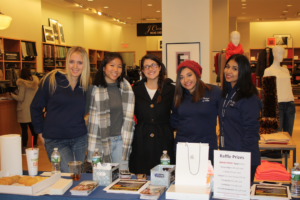 By 8 p.m., as most were exhausting the last of their coupons, shoppers were treated to live music, courtesy of Ashley Ponce, a junior education major, and Brian Carducci, a senior software engineering major. Friday marked the duo’s debut performance together, as they sang several breezy folk tunes written by Ponce herself.

“I love to write about the world and experiences,” Ponce said. “I’m inspired by the people in my life.”

For all those who didn’t make it down to New Haven on Friday, there will be plenty of other opportunities to take advantage of future savings. College Night is biannual, taking place every April and September, while Quinnipiac Night will have a reprise in the spring semester.

These events are all free to register for and all students are welcome to come. And as sophomore physical therapy major Rebecca Ferlazzo puts it, it may be the perfect change of pace for a Friday night out.

“It’s something different and relaxing for sure,” Ferlazzo said. “Anyone who wasn’t there was missing out on a new and fun experience. I can’t wait for next year.”