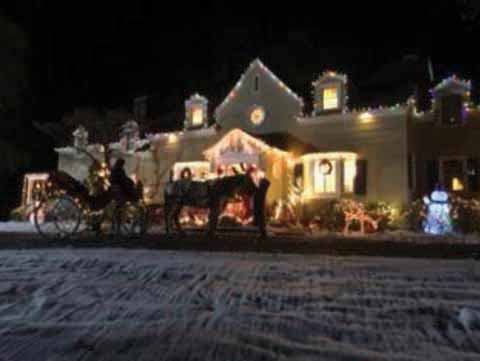 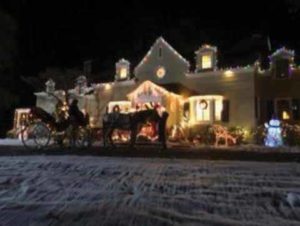 [/media-credit]Hallmark is bringing Hamden to the big screen this holiday season. One of the company’s newest holiday productions, “Romance at Reindeer Lodge,” was filmed at several locations in Branford, North Haven and Hamden. Much of the plot plays out at Reindeer Lodge, the film’s main locale, which is located minutes away from the Mount Carmel campus on Ridge Road in North Haven.

The sites where “Romance at Reindeer Lodge” was shot are close to the films location manager Greg Nutcher’s heart. A Hamden native, Nutcher has long harbored a passion for acting and the arts, but always envisioned himself in law enforcement. He chose to pursue the latter as a full-time career, but never lost his enthusiasm for the arts. Over the past two decades, Nutcher has acted in, written and produced dozens of works. He even had the chance to combine his passions when he played a New York Police Department Lieutenant in the 2015 film “Bridge of Spies.”

When a close friend of his retired from the position of locations manager at Synthetic Cinema International LLC, a film production company headquartered in Hartford, he referred Nutcher for the position. Nutcher was thrilled to accept, finally having found the opportunity to focus his career in the arts.

When Nutcher first became attached to the project in late October, the plan was to film “Romance at Reindeer Lodge” in Pomfret, Connecticut.

“As soon as they gave me the script for this movie, the first place that came to mind was right here,” Nutcher explained while gesturing at the ornately-decorated Ridge Road residence. “I knew about this house just from growing up in the area. I’d always admired it even as a kid, and I knew it’d make a great setting.”

The Branford locations are also sentimental for Nutcher, who continues to serve the town as a part‒time police officer. The Branford Green, that was converted into a idyllic Vermont village for the film, was frequented by Nutcher as child. In the past, Nutcher has always made a point of bringing his home to the silver screen, with every work that he’s written or produced taking place in the greater New Haven area.

“That’s what’s great about the job,” Nutcher explained. “Getting the audience to see and love these places like I do.”

Nutcher was sure the million dollar colonial on Ridge Rd. in North Haven was the ideal backdrop for the upcoming holiday romance film. The homeowners, however, needed just a bit of convincing.

“When I first showed up here to talk to the homeowners about filming, I knocked on the door and got nothing,” Nutcher reminisced with a laugh. “I looked around and I could see cars parked in the driveway, so I knew they were ignoring me.”

Eventually Nutcher did get to sit down with the homeowners, who were more than willing to let their house be transformed into the picturesque Vermont lodge that functions as the setting for most of the film. Since then, the sprawling estate has been completely decked out. No expense was spared in transforming the local home into a winter wonderland.

Nutcher wasn’t at liberty to divulge too many details of the plot of “Romance at Reindeer Lodge,” saying only that a couple took a holiday getaway that ended up not being quite what they had expected. Nutcher was able to speak more about the whirlwind production, with the entire film coming together in just under two months. There had been talk of having the film release in December 2018, but a change of plans pushed the date up by a year, and now “Romance at Reindeer Lodge” is due to premiere on Dec. 17 of this year.

“Some companies wouldn’t or even couldn’t handle it,” Nutcher said of the short time frame. “It’s very atypical, but when you have a great company and a great cast it can work. It’s happening, we did it.”