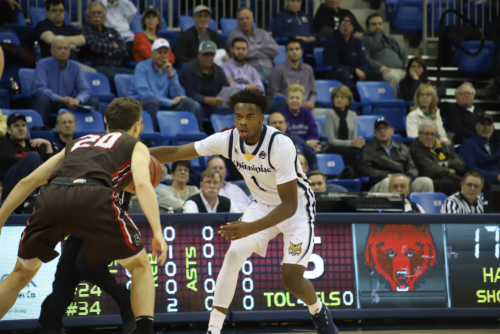 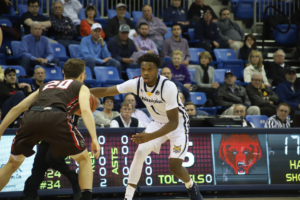 [/media-credit]The first two games of the Quinnipiac men’s basketball season should be something Bobcat fans can get used to this year.

This season will likely mirror the team’s inconsistent start to the year. They will be up and down, hot and cold, high and low. There will be good moments and there will be bad ones.

On Saturday, the team came out of the gates firing on all cylinders. They looked fantastic, up by nine against Dartmouth at halftime, and leading by as many as 16 early in the second half.

Then, later in the second half when Dartmouth made a 16-2 run, Quinnipiac responded better than anyone could have expected. They made a last-second stop to seal head coach Baker Dunleavy’s first career win.

Against Brown on Monday night, Quinnipiac struggled in a variety of areas, and ultimately fell 79-72. But for Dunleavy, the results don’t, and won’t, tell this team’s story.

“We’re never overly concerned about score or record,” Dunleavy said. “We’re concerned with how we’re doing things, and I think we have a good sample there of things we can clean up and get better at.”

Dunleavy is right to try to temper expectations with this team record-wise. They are not expected to compete for a MAAC Championship in year one. In fact, they were picked to finish dead last in the conference in the MAAC Preseason Poll.

For the Bobcats, the key to success this season will be hitting the glass and taking care of the ball.

In its win over Dartmouth, Quinnipiac dominated the boards, as it finished with a 48-32 rebounding edge, but committed 15 turnovers to Dartmouth’s six.

In their loss to Brown, the Bobcats lost the rebounding battle, 45-33, and turned the ball over 14 times, 12 in the first half.

For the Bobcats to win games this year, they will have to win at least one, if not both, of these categories. If they lose both of these battles, it will be hard for Quinnipiac to win many games.

“It’s probably more on the rebounding and turnover front because when you miss free throws and threes, you can still win games,” Dunleavy said. “You can do it, as long as you take care of the things you can control.”

Something else the Bobcats can control is attitude, which is a key component in Dunleavy’s methods.

“I’m just trying to be there for my teammates,” senior guard Cam Young, who had 15 points in Monday’s loss, said. “I have to do whatever it takes to make it easier for them.”

This sort of togetherness will carry the Bobcats far, regardless of their season-ending record. If Dunleavy can start to form a culture in the hallowed halls of TD Bank Sports Center, the Bobcats can be happy with the direction of this program.