Winning in the weight room 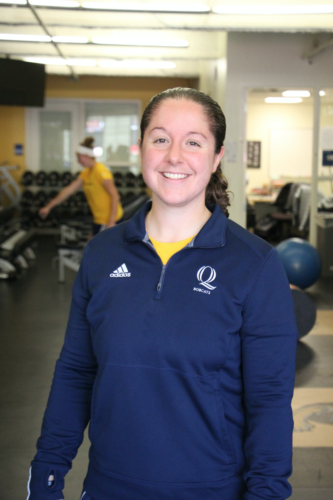 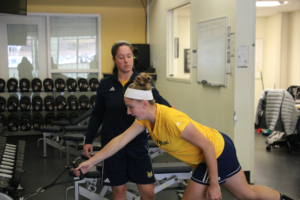 One step inside her ‘office’ and firm, but soft composite flooring greets four sturdy squat racks lined before the mirrored wall. Numerous weights, chains and rubber bands adorn the frames, while the relentless clank of metal hitting the floor, accompanied by music booming throughout, completes the beautiful chaos.

For Webster, this is a place of sanctuary for Quinnipiac’s Division I athletes to get better.

“We don’t work out in the varsity (Division I athletes’) weight room. It’s not a gym, it’s not a fitness center. It’s a weight room,” Webster said. “Creating that hard line between working out to work out, (and) training for a specific goal, at the end of the day for performance and winning a championship, that’s one of the biggest mental and physical switches that these student athletes have to make and we help them.”

Webster turns on the lights of the weight room at 5:30 a.m. Monday through Friday for the first team session at 6 a.m. Those same lights don’t go off until 6 p.m.. Her day consists of a constant flow of Quinnipiac athletes coming in and out, one team and one hour-session at a time.

Even though it’s a daily grind, Webster doesn’t blink an eye about getting up at the crack of dawn and staying late.

Quinnipiac has 21 Division I teams in all and they compete under the bright lights for the students and fans during the season. Behind the scenes, there is the constant effort of the strength and conditioning coaches to put every team’s athletes in the best position to compete at the Division I level.

Webster chiefly works with the women’s rugby, volleyball, field hockey and soccer teams in the fall and the men’s and women’s lacrosse teams in the spring.

According to Webster, in-season teams usually have strength and conditioning sessions once or twice a week based on their game schedule, while offseason teams can put in as many as five sessions a week with Webster and her staff.

“It’s an investment (on the athlete’s) part where they are investing in the process,” Webster said. “If you’re focused on the consistency of your habits… then the end result is going to come on its own. If we are obsessed with just winning… then that’s where I think some of those things can get in the way…We’re obsessed with having the best possible Monday at 6 a.m. that we can have.”

Contrary to the popular belief that strength and conditioning is all about getting stronger in a weight room, it is just as much a place where mental toughness is hard earned amongst the athletes.

That’s why Quinnipiac strength and conditioning has an intrinsic set of rules that the athletes follow unwaveringly.

“Two of our bigger (rules) are that when you are in the weight room space…(the first) is you don’t sit down,” Webster said. “Making sure that [the athletes] are aware and that they are owning their body language rolls into the second [rule], which is the stand tall rule.”

The stand tall rule, written by Head strength and conditioning coach Brijesh Patel goes, “No matter what the circumstances we do not allow any athlete to physically bend over, touch their knees, take a knee, sit down, or lean up against anyone or anything for physical support when they are fatigued, ever.”

Gaining a mental edge on opponents before the game even starts, begins in the weight room and in practice is where the stand tall rule reigns.

“It comes more into effect when we are doing conditioning sessions where people are tired and they want to bend over and put their hands on their knees,” Webster said. “Your body language is so important… It is a massive mental edge [against the competition].”

Webster first realized her dream of being a strength and conditioning coach as an undergraduate kinesiology student at UConn.

“I was an active member of the rugby team at UConn, and that was the first time where I really felt that I can make changes physically and performance-wise if I am smart about [training],” Webster said. “That’s where the passion for me grew, [I realized] I could help other people find this edge.”

UConn was where Webster first experienced a collegiate-level weight room staffed by professionals. In that environment, Webster discovered her love of coaching, working as a graduate assistant eventually.

“My opportunities to get into a physical weight room started junior year of [college], from there I walked in the door and never left. I knew that was where I wanted to be,” Webster said. “By the time I left UConn there was maybe one or two out of the 20 sports that I didn’t work with in some capacity.”

After receiving her Master’s degree in exercise science from UConn in 2014, Webster came straight to Quinnipiac. Patel hired her full time to work with teams on the Mt. Carmel Campus, while he operates from the gym at the TD Bank Sports Center.

“Our motto is to ‘Get Better.’ We share this with our student-athletes and we expect them to bring a passion to improve and get better on a daily basis,” Patel said. “[Webster] was the right person for our department to help build our mission and vision of our strength and conditioning department.”

The position at Quinnipiac provides Webster a unique opportunity to build her own strength and conditioning program from the ground up.

“I came into a situation where [Quinnipiac] didn’t have a full-time strength and conditioning department on the Mt.  Carmel Campus,” Webster said. 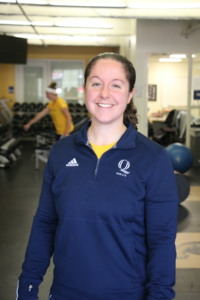 [/media-credit]Patel and Webster’s programs may be separated by campus, but they are connected through the same values and standards. Thanks to Patel, Webster has the autonomy to implement what she thinks is right for her athletes.

“I’m very lucky that [with] my supervisor, Brijesh Patel. There’s no bad idea, there’s no wrong question,” Webster added. “We will do anything [that works].”

When Webster first started at Quinnipiac she actually worked out of a small corner office in the multi-cultural department in the upper level of the recreation center and would fit all the team training sessions in the once-shared fitness center.

Two years after Webster’s start, a varsity weight room was constructed and that has given the opportunity to Webster take the program to another level.

“It was a major step up [for Quinnipiac strength and conditioning] because that’s an environment we can control, and set the expectations [and] rules,” Webster said. “We can create a training environment where everyone that walks through that door knows exactly what’s going to be asked of them.”

The weight room is a platform which has allowed Webster to transform the strength and conditioning to a space that is seriously committed to sharpening Quinnipiac’s athlete’s physically and mentally.

One of the ideologies Webster and her staff have implemented for their athletes is called ‘Postural Restoration Institute’ (P.R.I). The key to this training is an emphasis on body posture and what’s called “a neutral position” for the athlete.

“[P.R.I.] is a focus on posture in everything that you’re doing,” Webster said. “It’s a focus on optimal breathing patterns, being able to perform first in a neutral position, so that when sport continues to take you out of that neutral position, it puts you in more unfavorable or risky [body] positions. You have the ability to come back to the neutral position to re-establish (posture first) and then athleticism second.”

According to Webster, P.R.I. is more important than ever with this generation of athletes.

“We live in a time where…people have a phone in front of their face and their head is pulled forward,” Webster said. “We are literally dealing with a different student-athlete than 10 years ago because of the postures that we are in.”

Student-athletes are not perfect human beings, they have stresses too. Webster has made a point of her weight room mentality.

“I respect the fact that they are 18 to 22-year-old human beings who also have social, family, health stresses that are going to affect them performance wise,” Webster said. “I work very hard to not be robotic in my thinking in terms of this [session] not being the most important thing for [the athletes] that day.”

On the contrary, Webster plays devil’s advocate with stress. In the risk-versus-reward sense, some stress on an athlete’s body is a key to resiliency and growing stronger according to Webster.

“You have to apply a certain amount of stress in order to create change and adaptations. You have to induce a certain amount of physical trauma, soreness, that’s what strength training is,” Webster said. “But it is also how you apply that dosage in a way that [the athletes] are going to come out on the other end better for it.”

Webster’s support of the athletes reaches further than inside the walls of the weight room. One can usually see her on the sideline behind the bench, watching games that her teams compete in.

It’s that level of support and dedication that goes above and beyond which helps Webster have a meaningful impact on the athletes at Quinnipiac.

“It’s the greatest joy of my life to get to practice and see that we have good habits,” Webster said. ”Then to get to a competition and see that some of these athletic principles are transferring in a way that helps the team.”