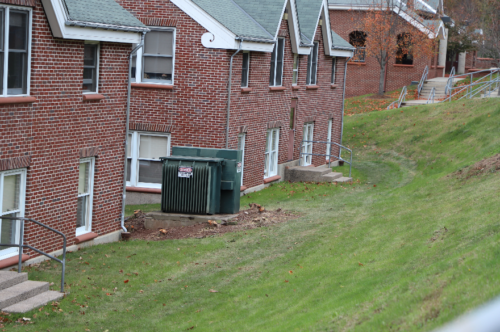 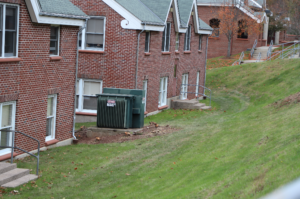 [/media-credit]Approximately 1,600 students living in The Commons, The Hill and The Village residential buildings on main campus were evacuated from their dorms on Friday, Nov. 11 after three transformers blew around 7 p.m., according to Public Safety Sergeant Bob Vignola.

The power outages also affected the Bobcat Den and the Health and Wellness Center.

Hamden Fire Department Chief David Berardesca said this was a rare occurrence. He said if the transformers did catch fire, it was probably quite small and probably burned out right away.

The Hamden Fire Department was called to the main campus due to smoke in some buildings after the transformers burnt out, however, there was no fire involvement.

“Whenever we have an issue with electricity, with high intensity wires or transformers like this, the first thing we do (is) isolate the area,” Berardesca said. “We want to isolate that… we want to set the power off where we can, we want to work with Quinnipiac’s maintenance people and security people who typically are well in tuned with the infrastructure and maintenance fixtures.”

Chief Berardesca said Quinnipiac is especially good at maintenance and what they do as far as their infrastructure, so it was comforting for the fire department and the town to know that this campus is being taken care of as well as it is.

The cause of the blown transformers is unknown, but Chief Berardesca said factors such as age or overload could have caused the malfunction.

Because of the transformer malfunctions, students living in The Commons, The Hill and The Village were evacuated and forced to either spend the night with a friend or relative that had power, be assigned to an empty bed or sleep in Burt Kahn Court, where mattresses were set up, according to a QU Alert sent to students around 10:45 p.m. on Friday night. This plan was put into place by the university’s Emergency Management team.

The Carl Hansen Student Center and Arnold Bernhard Library remained open throughout the evening for students to stay in.

On a regular Friday night, Public Safety has 15 or 16 officers on duty on campus, but Sergeant Vignola said the department called in the third shift due to the magnitude of the issue involving the evacuation of 1,600 students.

Vignola said the officers responded to each impacted area, secured it and called the fire department. Residential Life and Facilities also worked to implement the Emergency Management team’s plan.

Students in The Commons were allowed to return to their rooms around 11:30 p.m., though power was still not restored at that time. There was heat, fire protections and emergency lighting, though, according to a 11:29 p.m. QU Alert.

The facilities team worked throughout the day on Saturday to restore power to the remaining 21 buildings in The Village still without power. 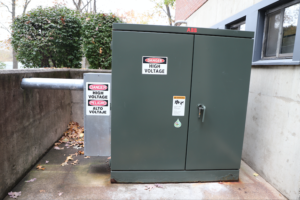 [/media-credit]Power was completely restored to the remaining Village buildings by 3:40 p.m. on Sunday afternoon.

“I will compliment the student body,” Vignola said. “The behavior was excellent. They understood the magnitude. There wasn’t a lot of complaining. Anything we asked of them, they not only cooperated with, but they were actually very helpful in assisting us if we needed a hand.”

Associate Vice President for Public Relations John Morgan also thanked students, facilities and the Emergency Management Team for their patience and understanding during the power outage.

“The Emergency Management Team mobilized on Friday night and met throughout the weekend to make sure that the university was doing all that it could to assist our students,” Morgan said. “In addition, Public Safety and Residential Life called in extra staff. We also appreciate the prompt response and tremendous support the university received from the Hamden Police and Fire Departments as well as United Illuminating.”

Chief Berardesca said the fire department is going to have an ‘after action’ report to go over exactly what happened, what actions were taken and what could have been done better, if possible.

“I think it went very well, when I say that… I mean no one got hurt,” Berardesca said. “Students were safe, and at the end of the day, that’s what we want.”

*Correction: This article was revised at 9:25 a.m. on Nov. 16 to clarify that power in the remaining Village buildings was completely restored on Sunday instead of Saturday.