Herald House holds night of remembrance for victims of genocide 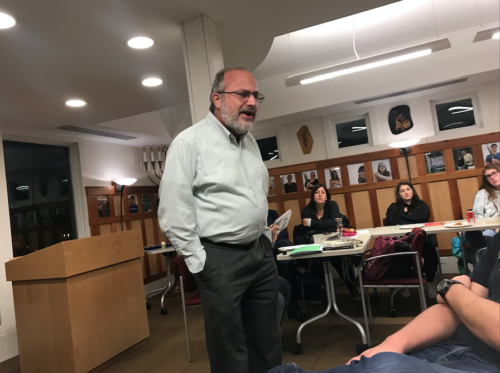 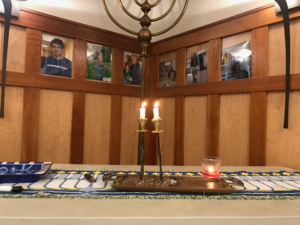 [/media-credit]The Peter C. Herald House hosted remembrance services and a genocide awareness talk for the 78th anniversary of Kristallnacht, also known as the start of the Holocaust.

Rabbi Reena Judd held the event to bring awareness on genocide and the dangers of allowing history to repeat itself.

“The Holocaust is something that has unfortunately been repeated,” Judd said. “As a Jewish people, we tend to cling onto the Holocaust, but we have to be aware of the horrible damages caused in other cultures where they are not allowed to heal.”

The night began with a short Jewish prayer ceremony. First, there was a Schma, which is the strongest prayer in the Jewish faith, similar to the Lord’s Prayer in Christianity or the Salah in Islam.

A mourner’s kaddish followed, which is a prayer in honor of the dead. Participants prayed for specific lost friends and family, as well as all victims of genocide over the years. A toast was raised in memory of the lost.

Lastly, the Sabbath candles were lit as a way of remembering the day of rest. Hallah, a loaf of bread, was passed around to help enhance the prayer service.

“In Jewish prayer, we honor the Sabbath with prayer,” Judd said. “We welcome it with candles, sanctify it with the drinking of wine, indulge in it with bread.”

Judd invited Dr. Armen Marsoobian, chairperson of the Southern Connecticut State University (SCSU) philosophy department and the child of survivors of the Armenian genocide, to speak on his experiences.

The Armenian genocide was the Ottoman Turk’s systematic extermination of about 1.5 million Christian Armenians. Unlike the Holocaust or other genocides in history, this genocide has never been officially recognized by an international body or even the nation it took place in.

To this day, the Turkish government claims that the killings do not constitute genocide and that the death toll is greatly inflated.

“It’s hard to heal (from genocide) as it is, but when you are ignored or silenced it is even harder,” Judd said. “As Jews, the world has embraced our trauma and helped us heal with love. Even the Germans beg for Jewish forgiveness and help heal. The Armenians do not have such a lucky break.” 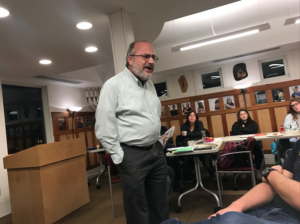 [/media-credit]Marsoobian has spent the past 10 years talking about his family’s experience during the Armenian genocide. His grandfather was able to survive due to his skills as a photographer. The Turks offered Marsoobian’s grandfather a job as a propaganda photographer for World War I. He would be allowed to survive if he and his family renounced their Christian faith and converted to Islam.

They agreed, although they continued to practice their Christianity in secret. While his grandfather spent the next two years in the army taking photos, he also spent a lot of that time trying to hide other Armenians. Over the course of the war, Marsoobian estimates they saved between 25 and 30 people, as well as the 10 children in the family. Amongst those 10 kids was Marsoobian’s 4-year-old mother.

He encourages anyone interested in his family’s story to read his book, Fragments of the Lost Homeland. For more information on the Armenian Genocide, he suggests the book Black Dog of Fate by Peter Balakian.

Marsoobian passed out pamphlets from The Genocide Education Project. The pamphlets gave 10 stages of genocide and how to recognize and stop them in a society.

“Genocide begins with hate, regarding people as the other, and begin the process of dehumanizing them,” Marsoobian said. “When we see that kind of bigotry go on, we need to say no. We get this feeling of how evil people can be, but we also see these people that resisted and said no. We have to be the people who say no to hatred.”