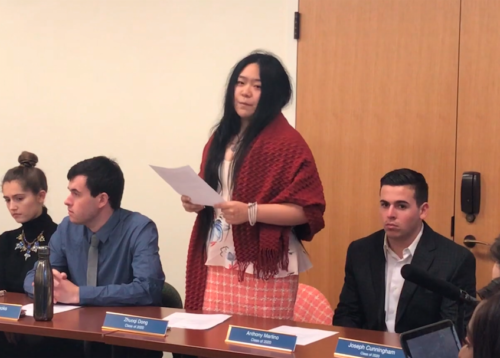 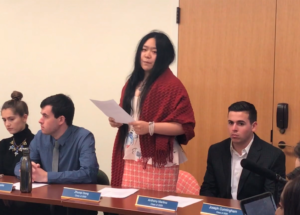 Members of the Student Government Association (SGA) voted during the general board meeting Wednesday, Nov. 8 to remove sophomore Class Representative Zhuoqi Helen Dong from her position. In a vote of 27 for and 11 against, Dong was removed from office.

Dong said there was a provincial flag of Taiwan hung at the International Business Dinner, but there was not a flag of China.

While members of SGA have been asked to step down from their position in the past, no member has been removed in the eight years that SGA advisor, Erin Twomey, has been working with the student government, according to Vice President of SGA Jacqueline Schmedel.

During the impeachment process, an impeachment committee, made up of one representative from each class, excluding the sophomore class, the Vice President and President of SGA, met with Dong and allowed her to defend herself.

However, Dong said the impeachment committee did not understand her reasoning.

As an international student from Xi’an, China, Dong explained the history between China and Taiwan in the Chinese Civil War.

“The Chinese Civil War made China and Taiwan a little bit divided,” Dong said. “That’s why in 1972 and also 1979, there was a treaty between the U.S. government and the Chinese government about the One China Principle and the U.S. recognized Taiwan as part of China.”

Dong believed that hanging only a flag of Taiwan without a flag of China would have created potential controversy.

“The United Nations does not recognize Taiwan as a country,” Dong said. “I have no disrespect for Taiwan; I just want to avoid controversy. Taiwan cannot represent all of China. By only having a flag of Taiwan up, it’s more like making a statement like, ‘We saw Taiwan representing all of China.’ That creates controversy.”

Hanging both flags would have been a solution, according to Dong. She said there was no time to have access to a flag of China in time for the International Business Dinner, so she felt it was necessary to take down the flag of Taiwan.

Members of SGA are given a list of events that they are advised to go to throughout the academic year, the International Business Dinner being one of them.

“[Dong] had helped advocate for the IB dinner and she had spread the word to [SGA] about the IB dinner so in that sense she was an extension of SGA,” Schmedel said. “According to the president of the IB Society she wasn’t a current member. In the way that we see it, if you’re not a current member and you are there on the request of SGA, you are there as an SGA representative.” 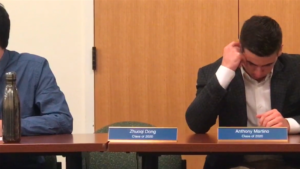 “[Dong] was worried and she came to me and said ‘Professor He, did you notice that the Taiwanese flag is in there but no Chinese flag?’ and she said ‘should I take (the flag) down to avoid controversy?’” He said. “She asked Professor (Mohammad) Elahee and we both agreed there was no time to command a meeting to discuss this. If there’s no flag it would be better, no controversy. So she took it down and folded it and I saw her and present it back to (a member of the IB society).”

As the event was open to the public beyond Quinnipiac, He was concerned visitors would notice the issue.

While there aren’t any Taiwanese international students at Quinnipiac, there could be people of Taiwanese descent or people connected with Taiwan in different ways that could be hurt or offended by her actions, according to Schmedel.

“She was very adamant about how she did this in defense of China,” Schmedel said. “She did it to protect Quinnipiac from international warfare.”

Members of student government are held to higher standards as student leaders, according to Schmedel.

“I think the biggest thing is we have no hard feelings against Helen,” Schmedel said. “I know a lot of people in SGA were particularly close with her and we’ve known her ever since she came to Quinnipiac. It’s sad to lose a member of our SGA family. When she left the room, no one felt good about it.”

Dong wanted to officially say thank you to all the students who supported her during the year and a half that she served on Student Government and the members of the association who voted not to remove her.

“Being removed from office allowed me to see we have a large issue on campus which is in regards to understanding each other,” Dong said. “My freshman year was beautiful because of SGA, but sophomore year was a little bit rough. I do consider SGA as a safe space – I thought I could advocate for international students by having a voice at that table, but without that voice I do not know if SGA is still a safe space for international students to go to.”