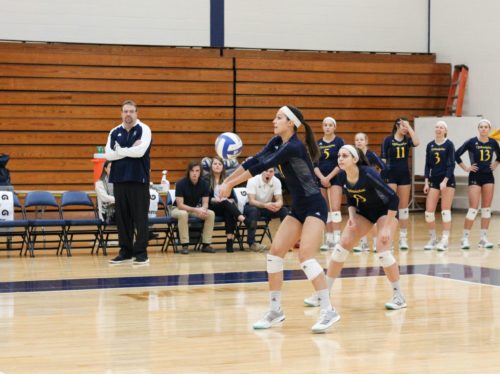 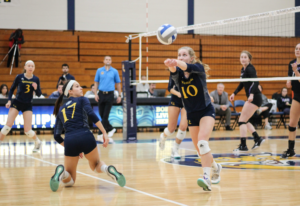 [/media-credit]The Quinnipiac volleyball team lost to the Niagara Purple Eagles, 3-1, in four sets on Sunday, to end its regular season.

The Bobcats found themselves down by four points early on in the contest, but bounced back and took the first set, 25-20. Sophomore outside-hitter Natalie Alechko had five kills.

The second set went back and forth, with both teams taking multiple point leads a couple times. The Purple Eagles were able to edge out the Bobcats 25-23 in the second set to even things up going into the 10 minute break.

Sophomore Draik Banks stepped up defensively for the Purple Eagles, producing a kill and three blocks in the second set.

After the break, the Purple Eagles started coming alive in every aspect of the game, whether it was offense or defense.

Banks along with sophomore Caroline Leitch combined for five kills and four blocks for the Niagara in the third set. Junior hitter Kat Miller carried the load for the Bobcats with five kills and three blocks, however she had several errant serves and the surging Purple eEagles were too much to handle as they took the third set, 25-21. 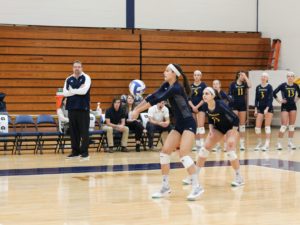 [/media-credit]The fourth set is when the Purple Eagles started to take over the game. They took the first point of the set and the Bobcats were unable to tie or get the lead throughout, ultimately losing 25-18.

The loss to Niagara snapped Quinnipiac’s three-game winning streak, but Bobcats head coach Kris Czaplinski was glad that his team played the second-seed Purple Eagles before the MAAC Tournament, which begins on Friday, Nov. 17.

“We got everyone to play today,” Czaplinski said. “We know who’s going to be ready going forward to next week. We took a lot of positives out of today.”

Over the course of the season, Quinnipiac has been forced to overcome larger obstacles than they thought.

At the beginning of the year, the Bobcats played Washington State and Baylor, who at the time were ranked 28th and 29th respectively in the country. The Bobcats lost to both teams in three sets.

Then on Sept. 24, just four games into conference play, junior hitter Jen Coffey went down with an ankle injury. At one point in the season hitters Coffey, Miller and senior Elizabeth Kloos were all injured at the same time.

Czaplinski described it as a “humbling” season overall.

“It made us grow more as a team,” Czaplinski said. “We grew together a little bit more, we learned a lot about each other and ourselves.” 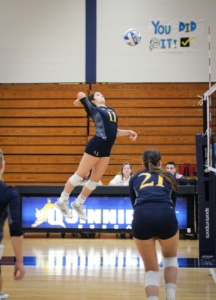 [/media-credit]With the Bobcats clinching a playoff berth after defeating Canisius on Saturday, Nov. 11, the Bobcats are making the switch to playoff mode.

“It’s a whole different season, a whole different game once you get into the playoffs,” Czaplinski said. “It’s a good thing we got tested in the playoffs last year making it to the championship. But we’re ready. We have people back who know exactly what it’s going to be like. We’re excited.”

The Bobcats will enter the MAAC Tournament as the sixth seed and if the standings remain the same, they will likely take on Marist first, who is currently ranked third.

Last season, the Bobcats defeated Marist in the MAAC semifinals 3-1.