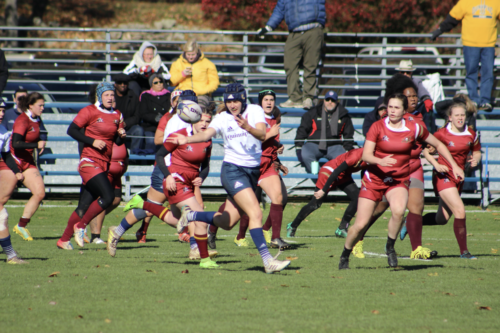 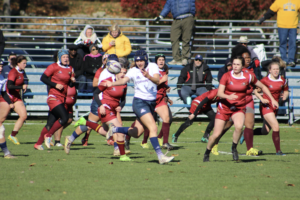 [/media-credit]The Quinnipiac rugby team began its pursuit of a third straight national title at the Quinnipiac Rugby Field on Saturday morning. In an opening playoff game on their home field, the Bobcats turned an NIRA quarterfinals matchup with Norwich into a mere formality.

The Bobcats thrashed the Cadets, 55-7, to advance to the NIRA semifinals, where they will face Central Washington for the third time this season.

“This game was great, but now we’re moving onto the next one,” senior Flora Poole, who finished with two tries and four assists in the contest, said.

Neither team put up any points in the first 15 minutes of action, but the opening minutes set the stage for a new program record. Senior Jessica Maricich became the first Bobcat to record 200 career tackles when she made an early stop in front of the Norwich bench. While Maricich says she didn’t know she was nearing the mark until the week leading up to Saturday’s matchup, she garnered overwhelming support from the sidelines.

“I am so excited, but beyond that, I feel incredibly blessed to have a team and fans who are so supportive of an accomplishment that I was really proud of,” she said.

After the initial lull in action, senior Ilona Maher got the scoring started midway through the first half when she punched in her 17th try of the season. From there, Norwich could not find any answers to stop Quinnipiac.

Senior Rebecca Haight drove in for the Bobcats’ second try just minutes later off an assist from senior Tayler Schussler. Quinnipiac continued its attack with a try from Schussler and sophomore Mikah Maples notched the team’s fourth try with about six minutes to go in the half. 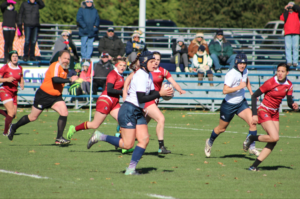 [/media-credit]Norwich earned a try as time expired in the first half, but Quinnipiac kept all momentum heading into the second. Schussler scored her second try six minutes in to make it a 31-7 game. While Norwich maintained possession throughout the second half, the Bobcat offense rolled as junior Emily Roskopf, Poole and Maher all found the try zone to strengthen their lead.

“That’s the kind of play you’re used to watching,” Quinnipiac head coach Becky Carlson said. “We were able to muster those plays after not having possession.”

Poole capped off the game with another score in the final minutes to cement the 55-7 win.

“Offensively, it took us a little bit to warm up,” Poole said. “Movement of ball in the second half especially was just beautiful.”

Now, Quinnipiac turns its attention to an all-too-familiar foe in No. 3 Central Washington. The Bobcats and Wildcats split their season series with each team scraping a single-digit win on their home field.

“I expect for it to be a good game, some good, fast rugby, a lot of contact,” Carlson said. “We’ve seen them twice before, so we know what to expect.”

The teams have seen each other in the playoffs too, as they squared off in last year’s NIRA Championship game, in which Quinnipiac ran away for a 46-24 win and a second straight national title.

“They are going to come out full force and we’ve got to do the same and be better,” Poole said. “That’s our mindset at the end of the day.”