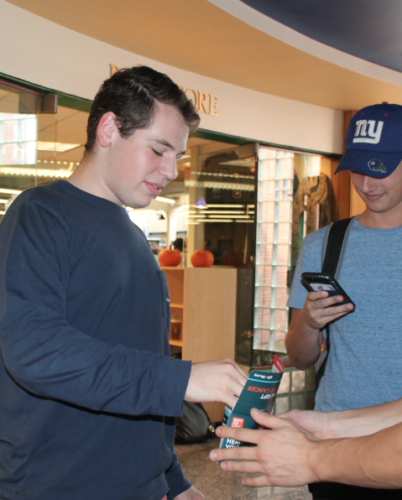 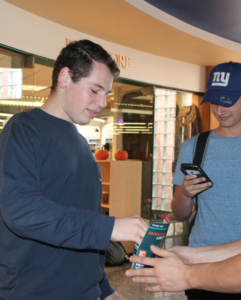 [/media-credit]“Do you want to save a life today?”

The fraternity hosted the event with Gift of Life marrow registry, a public bone marrow and blood stem cell registry.

AEPi is listed on the Gift of Life website as one of their partnering organizations.

The brothers lured potential donors to the table with phrases like, “will you marrow me?” and “gift of life to save a life.”

“One of the more consistant organizations we partner with is the bone marrow foundation,” Jon Becker, junior biomedical science major and President of AEPi, said. “It’s very easy to actually pull off this event. All we have to do is get a couple cotton swabs from people and the foundation does the rest. They find the donor, if there is one. It’s an unbelievable cause.”

Students were given a small packet which included a registration form to sign themselves up as a potential donor and two wrappers containing two long cotton swabs in each.

Each time a student unwrapped the cotton swabs, they looked to an AEPi member puzzled.

“Take one swab, rub it on the bottom right of your cheek for eight seconds. Second swab, top right, third, bottom left and forth top left,” the members said.

From there, the packets are sent off and Gift of Life completes the process.

“In the future, you may be called as a potential match,” Becker said. “If you’re a patient you’ll be asked to do a blood test. Of course it’s all voluntary, but at the end of the day, they are very simple steps in the event that you are a donor.”

Their fraternity’s organization has been partnered with Gift of Life since 2004. AEPi has had over 10,000 donors registered, 373 matches and 55 transplants since their partnership with Gift of Life, according to giftoflife.org.

“We actually don’t have a goal,” Becker said. “If you want me to say a random number, it would probably be as many people as possible. Because at the end of the day it’s not highly likely that you will be a match but if you are, you are and obviously the probability that we have a match will be more likely with the more people. On our end, we are just trying to encourage people to take five minutes of their time, stop by swab their cheeks and we’ll take care of the rest.”

The brothers also accepted cash donations from those who did not want to register and donations in the form of Venmo, a mobile payment service. 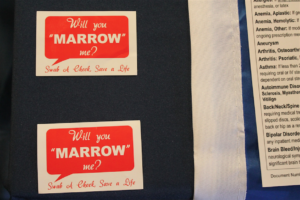 [/media-credit]“If (donating bone marrow) is as easy as donating blood, yeah I’d do it, but if it’s a surgery then no probably not,” Sara Grossman, a freshman interactive digital design major, said. “You never know if you’re gonna be a match or not.”

Bone marrow donation is a surgical procedure, according to bethematch.org, a national marrow donor program.

“Bone marrow donation is one of two methods of collecting blood forming cells for bone marrow transplants,” according to Be the Match. “Doctors use needles to withdraw liquid marrow (where the body’s blood-forming cells are made) from both sides of the back of your pelvic bone. You will be given anesthesia and feel no pain during the donation. After donation, your liquid marrow is transported to the patient’s location for transplant.”

Camilla Abreu, senior behavioral neuroscience major said she registered because she had the time.

Kayle Moore, athletic training and physical therapy major said she did it because she knew the importance of it.

“I’ve never donated blood, but I would consider doing this,” Moore said. “I know it’s painful, but I can’t say I wouldn’t do it.”

Every four seconds, someone is diagnosed with cancer, according to Gift of Life.

“By them swabbing, they know that if they are a match, and hopefully they can get called and have the opportunity to save a life,” Casey Hyman, junior sociology major and brother at large for AEPi said. “There’s no greater deed than to do that. My best friend’s dad from home actually had the opportunity to save someone’s life by doing this.”

AEPi ended the event with a total of 34 packaged registrations. They hope to continue this event in the future and incorporate it in other ways on-campus.

Whether any Quinnipiac students will be a match is left unknown for now, but the brothers are thankful for those who participated, stating, “Thank you for allowing us to marrow you.”