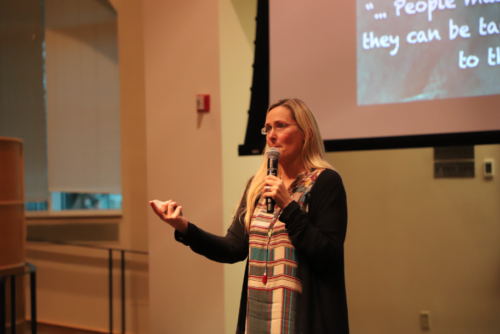 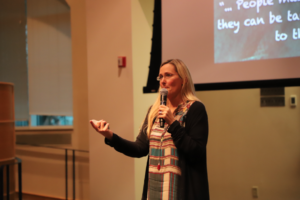 [/media-credit]Scarlett Lewis came to Quinnipiac to speak to students and faculty about her Choose Love Movement that she founded in memory of her son, Jesse.

Lewis lost her son, on Dec. 14, 2012 in the Sandy Hook tragedy. As Lewis discussed in her talk, she did not immediately assign blame on Adam Lanza, nor his mother, Nancy.

The Mount Carmel Auditorium filled up as Lewis began her presentation. The presentation served as an invitation to accompany Lewis and choose love to combat hate and anger.

“I couldn’t blame, I couldn’t find fault in anyone else,” she said.

Lewis rather proposed that Lanza’s actions were a result of an mad thought in his mind.

“It was an angry thought that caused the tragedy,” Lewis said, “A thought can be changed (by choosing) a loving thought over an angry one.”

Now, nearly five years later, Lewis’ mission is to educate. She strives to educate children to choose love, but does not limit her audience to solely the youth.

Lewis was inspired by her son to start her movement to choose love. She stressed that everyone is connected through love.

Lewis told the audience how Jesse had left a note before he died that said “Nurturing, healing, love.” This became the foundation for her movement.

“We all want to love and be loved,” Lewis said.

Lewis uses a formula she developed for choosing love which includes courage, gratitude, forgiveness and compassion.

“It’s the kids that fully understand it,” Lewis said. “Kids are wired for compassion, we are just nurturing what is already there.”

Lewis said she could be a victim and allow Lanza to destroy her life, or forgive him and take back her personal power and be part of the solution. 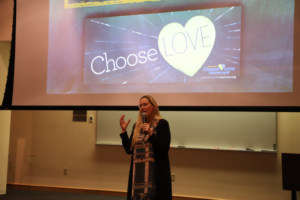 [/media-credit]As many were angered and frustrated by Lanza’s actions, Lewis felt compassion for him due to the situation he came from.

“I can feel anger for him, rather than at him,” Lewis said.

Along with her formula, Lewis highlighted the issues that society faces. These issues included: untreated mental illness, trauma, bullying, substance abuse, violence and suicide. Lewis does not believe that these are political issues.

“This is an issue of the heart,” Lewis said, “We have the power to do it, we have to fix it ourselves.”

Additionally, Lewis developed the Choosing Love Enrichment Program which has now been adopted in 47 states and 20 countries. The program provides a social and emotional learning environment and teaches love. One hundred percent of teachers saw overall improvement in their classes.

Her campaign is, “the solution to what we are experiencing in our world,” according to Lewis.

“I can’t tell you why he went to Sandy Hook,” Lewis said, “There is no safer place in the world than in a first grade classroom at the end of a cul-de-sac in pastoral Newtown, Connecticut.”

Lewis told the audience how her way of life changed after that day, and after beginning her movement.

Lewis’ discussion was deeply rooted in post-traumatic growth, how she was molded through her difficulty, pain and suffering.

In her Post-Traumatic Growth, Lewis gained perspective in her life and deepened her spirituality.

“I struggle every day,” Lewis said, “And I probably will forever.”

On the bad days, Lewis always goes back to gratitude.

“There is always something to be grateful for, even in your deepest, darkest moments,” she said.

Despite her experience, Lewis tries to live a positive life each and every day.

“Living a positive life attracts amazing people. When you change yourself, the people around you change.”

Freshman Dayna Coyle attended the event so she could learn how Lewis coped with her son’s death and how it changed her outlook on life.

“I learned how important it is to forgive people and love others… it’ll help you live a better life,” Coyle said.

The main purpose of Lewis’ movement is proactive prevention. She strives to overcome the fear narrative that accompanies these kinds of tragedies.

There are two choices that can be made after a tragedy: love or fear, according to Lewis.