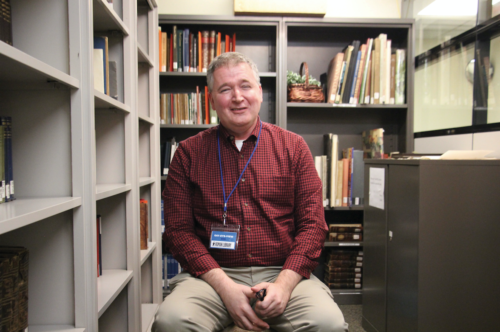 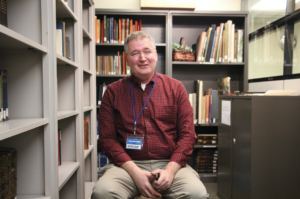 [/media-credit]After walking into the Arnold Bernhard Library for the Human Library event on Wednesday, Nov. 1, the book of one’s mind is about to be told.

Valeski greets an author to a reader and brings them to a reserved space on the bottom floor of the library. These two people are given 20 minutes to express the author’s story told directly from their mind, and then the two converse about the private story. As the reader sits down, they have no idea what to expect. The reader is about to learn about the writer’s life as if they were opening and reading a physical book about them. Then, a reader allows the writer to turn the pages for them one mystery at a time.

The Human Library event is held around the world. The goal of this event is to not judge a book by its cover. Through the variety of different books that are told within each event, the event coordinators are trying to diminish stereotypes and break through the walls of how people look at each other.

“Individuals will then become more empathetic, recognizing the individual in all of us and fostering respect,” Janet Valeski, the Readers’ Services and Reference Librarian, said about the event.

Now, at Quinnipiac, the event coordinators wanted to bring awareness to these stereotypes for the first time.

“We are bringing this program to Quinnipiac to promote tolerance and understanding, challenge assumptions and celebrate diversity within our community,” Access Services Librarian, Sandy O’Hare, wrote on the event page.

According to Valeski, there were seven books shared and 15 readers. The two-day event on Wednesday, Nov. 1 and Thursday, Nov. 2, had 24 reading sessions throughout.

These seven books spoke out about a variety of different topics. From a background of an abusive relationship, a gay man growing up in the late 70s, a student who went through a transfer experience to an individual’s life as a Jehovah Witness. These are only a few of the topics discussed at the two-day long event.

Bobby Young, the Public Services Librarian, spoke about his life book entitled, “Gay-Eye-View: Insights From the 1970s to Now.” Young’s story worships around being a gay man who grew up in a time where the LGBTQ community was not as accepted as it is today. For Young, he valued vintage photos and history in order for him to get an insight on the history of the LGBTQ community and more.

“I never knew about the Human Library in general or at Quinnipiac,” sophomore Kaley O’Connor said. “I’m shocked about how strong these people are to share their stories.”

O’Connor’s was in shock with how people bravely shared their stories and did not receive a stronger amount of credit for their doings, such as Dylan Koval.

Koval, a sophomore, is another storyteller from the event. His book, “Turning My World Upside Down,” told his story about being a transfer student, and the challenges of switching colleges alone at the age of 20.

Koval transferred from Roger Williams University in Bristol, Rhode Island, to Quinnipiac at the end of the spring semester in 2017. He targeted how being an architecture major at Roger Williams did not allow him to advance his college experience as much as he desired to.

The explanation of the transfer project came next. Koval spoke about the strangeness of dropping his life at one school and starting a clean slate at a different university. He became a history major once he became a student at Quinnipiac; changing his entire future. Although Koval did not describe the process as difficult, he still wanted the readers to view the process as a possibility if one desires to pursue it.

Koval explained that his reason for contributing to this event was to help people.

With being looked at as a transfer student, a gay man and more, the Human Library enhances how there is always a mystery in between the pages of a book. There is a title that you could read as you browse through a library, but there is always privacy and secrecy within the chapters of a book. The event coordinators are still in the process of evaluating the event, so the question pertaining to a second Human Library is still up for questioning.