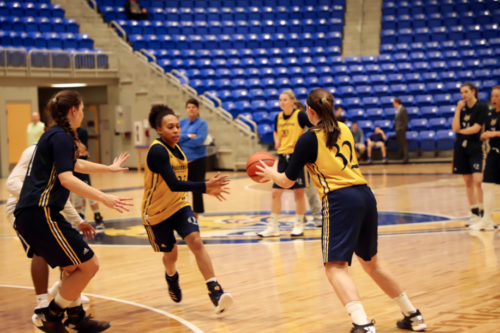 Tricia Fabbri enters her 23rd season as the head coach of the Quinnipiac women’s basketball team, but this season is already far different than any other.

For starters, the Bobcats are coming off their most successful season in program history, in which they went 29-7 overall and 17-3 in the MAAC, which was good enough for their third-straight MAAC regular season championship. They then went on to win their second MAAC Tournament in three years, securing a bid in the NCAA Tournament.

In the tournament, Quinnipiac made history by upsetting Marquette and Miami in the first two rounds, giving the team its first two NCAA Tournament wins in program history and making it the fourth No. 12 seed to make it to the Sweet 16. However, its season came to an end there, as it lost to the eventual national champion South Carolina.

But that success has carried over into the preseason. The Bobcats were named the unanimous preseason favorites to win the MAAC. They also received national recognition, as they were awarded the top-ranking in the national mid-major poll, earning 28 of the 31 first-place votes.

“There’s been a lot more notoriety and respect to the program and individuals,” Fabbri said. “…But that’s all just kind of for the media to have, some good stuff to talk about.”

Junior forward Aryn McClure also received some preseason love as she was named to Preseason All-MAAC First Team as well as MAAC Preseason Player of the Year, a first in program history.

“We appreciate all the honors,” McClure said. “…It’s great that the league recognizes me as one of the elite players in our conference. It really doesn’t mean anything, it’s preseason, not the actual season. If I get it at the end, that would be great. If I don’t, as long as we got a MAAC Championship that’s all I’m worried about.”

McClure made the All-MAAC Third Team last season and was third on the team in scoring (9.1 points per game) and first in rebounds (5.8 rebounds per game). 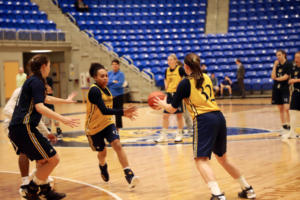 “Of course it’s a pleasure to have that, it’s an honor,” Fay said. “I appreciate it, but it doesn’t really mean anything. It’s just a preseason award. I haven’t done anything yet. It’ll be the end of the season that will determine whether or not I should’ve got that.”

Fay also made the All-MAAC Third Team last season while leading the team in scoring (10.5 points per game) and ranking fourth in rebounding (4.4 rebounds per game).

With all of the talent the Bobcats bring back, they do lose one of their top players from last season in Adily Martucci, who made the All-MAAC Second Team and was second in scoring (10.4 points per game).

“(Martucci) developed as the season went on such a dependable offensive and defensive weapon for us,” Fabbri said. “I think at this point last year we didn’t know we were going to depend on her as much as possible so I can’t wait to see who is going to fill that role for us this year.”

Fabbri has recognized sophomore guard/forward Vanessa Udoji as someone who has stepped up in potentially filling that role left by Martucci.

“You come to expect that biggest jump come from your freshmen to your sophomores just because it’s that wide-eyed freshman year to, ‘Okay, now I had that great foundation and know what to expect because I had that year of experience under my belt,’” Fabbri said. “I’m also going to credit Vanessa that she was up here for both summers. She chose to be up here and working on her game, working and training with (strength and conditioning coach Brijesh Patel) on the court. Putting in the time besides doing what’s expected of her on the court. Beyond what was expected on the court.”

Senior guard Carly Fabbri has noticed a few players that have taken over Martucci’s role as a leader and that the team can work together to makeup for the loss on defense.

“I think Jen (Fay) and (Sarah Shewan) and even Edel Thornton, a junior, have done a great job really taking on that leadership role,” Carly Fabbri said. “Defensively, I think it’s been more of a team mindset…Adily was a great defender, but we have to have that team mentality that we need to shut people down one-through-five, not just necessarily one defender on the team.”

Carly Fabbri also noted that in addition to Udoji, the rest of the sophomore class can have an impact on the team this season.

“I think that whole sophomore class is really doing a great job so far in practice,” she said. “I think Paige Warfell, you’re going to see her do a lot of great things this season. Jaden Ward is another big that battles. Taylor Herd’s been getting her shots off and they’ve been going down. I definitely think the sophomore class as a whole has been working really hard.” 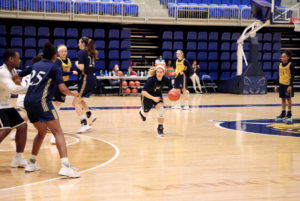 [/media-credit]The Bobcats will start their season off with a challenge. They travel to Iowa on Friday to face the Hawkeyes in the Iowa Tip-Off Classic. On Saturday, they’ll play either Missouri or Western Kentucky depending on what happens in the first game.

But that’s not all in terms of major opponents on Quinnipiac’s non-conference schedule. The Bobcats will play at No. 5 Ohio State, Richmond, Hampton, Michigan State and Central Michigan Additionally, they’ll host Northern Colorado, Dayton, Providence and Princeton.

Of its 11 non-conference games, Quinnipiac will face five teams that made the NCAA Tournament last season.

“It’s the toughest non-conference schedule we’re going to face in my 23 years,” Fabbri said. “It’s on purpose…(we) want to continue to build the program.”

The Bobcats will begin conference play on Dec. 28 at home against Siena. From there on out the rest of their schedule will be conference games. A rematch of last season’s MAAC Championship game will occur twice as the Bobcats host Rider on Jan. 15 and will travel to Rider on Feb. 23. Marist, who was picked to finish second in the MAAC, will come to Hamden on Jan. 11 and Quinnipiac will return the favor on Feb. 18. 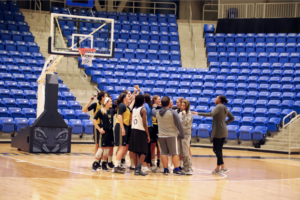 [/media-credit]“I think everyone’s out to get us since last year too,” Fay said. “It’s pretty much the same expectations but obviously we’re just going to have to play our best everyday, again.”

Quinnipiac will then play in the MAAC Tournament, which takes place from March 1-5. In order to get back to the NCAA Tournament, the Bobcats will most likely have to win this tournament.

“This year it’s like, ‘Let’s see what we can do and get deep into the tournament,’” Fabbri said. “It’s (step-by-step) right now. I think that’s the only way you can approach it in November.”