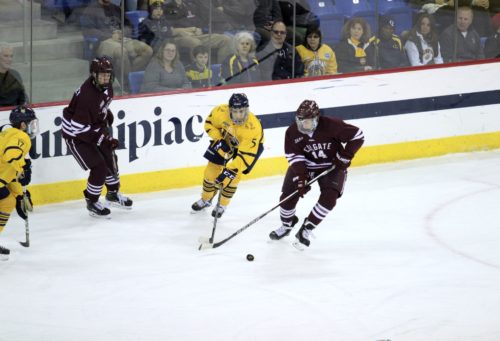 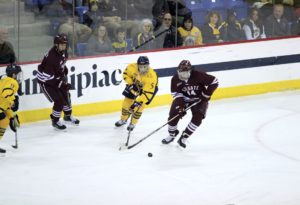 [/media-credit]“It was not our best effort tonight,” Quinnipiac head coach Rand Pecknold said. “Congrats to Colgate. I thought Colgate was really good…certainly we’re disappointed with our effort, not just tonight, but this weekend. But it’s a good group of guys and we’ll figure it out. We’ll get better. We need to get better. We’ll work on it.”

The game featured several defensive miscues from the Bobcats, as the Raiders scored four times on sophomore goalie Andrew Shortridge, who got the start in goal for the second-straight night.

The Raiders first goal came with less than eight minutes left in the first, just seconds after they killed off a four-on-four and were able to get on the power play.

The play started with Colgate forward Bobby McMann as he moved from the right faceoff circle and went left to the slot. He lost control of the puck but gathered it back up and shot. Shortridge saved the initial shot, but his glove side was left empty as forward Adam Dauda got the rebound from the crease and put it in.

Forward John Snodgrass put the Raiders up 2-0 nearly 90 seconds later. The Raiders had a two-on-one breakaway as two Bobcat defenders trailed. Dauda led the attack near the boards entering the Quinnipiac zone. As he neared the left faceoff circle, Dauda centered the puck to Snodgrass in the slot who moved a few feet forward before shooting and beating Shortridge to go up 2-0.

“We struggled mentally with details and a lot of little things,” Pecknold said. “Sometimes I forget, as their coach, that they’re 20, 21 years old and we made some mistakes tonight and give Colgate credit. They made us pay for them.”

The Bobcats got their first goal just 97 seconds into the second frame. Sophomore defenseman Karlis Custke got the puck along the boards by the left faceoff circle. Cukste took the shot from there and the puck went by traffic in front of the net and squeaked by Raiders goalie Colton Point’s legs.

The goal was Point’s only breakdown, of not just the game, but the weekend, as he also had 43 saves on Friday night as Colgate tied Princeton, 0-0. Point had 33 stops on Saturday, with his biggest stop coming halfway through the second, when sophomore forward Alex Whelan was set up with a one-timer in front of the net, but Point stopped it with his blocker-side. 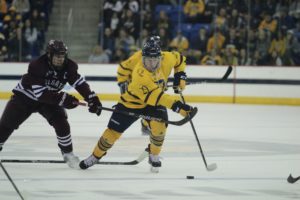 [/media-credit]“Tonight, we ran into a good goalie, so credit to (Point),” senior defenseman Kevin McKernan said. “I think we just got to keep getting more traffic on net, getting bodies in front.”

Pecknold called Point’s save on Whelan one of the saves of the year, so far.

Quinnipiac’s offense began to pick up in the second period as they had 16 shots on goal, including a power play in the final minutes as they had eight total shots. But just like on Friday night in their 2-1 loss to Cornell, the Bobcats couldn’t find the back of the net.

“I think we’re missing the net a lot on our shot attempts. It’s tough to score when you miss the net,” Pecknold said. “We got to do a better job of getting traffic. We were okay with that tonight at times. Sometimes we had a player there and they just really weren’t screening the goalie. We’ve got to get better at that.”

As Colgate killed off the penalty, the Bobcats seemingly had the momentum on their side with 30 seconds left in the second period. But with eight seconds left, Colgate senior forward Mike Panowyk broke up a Bobcat pass following a faceoff in the Colgate zone. He then took the puck up the middle of the ice, past two Bobcat defenders and was one-on-one with Shortridge. Panowyk’s deke was too strong for Shortridge and he scored to put the Raiders up 3-1 with 0.3 seconds left in the period.

“That was the backbreaker,” Pecknold said. “We run that play all of the time. We’re supposed to have our (defense) back (laughs). Again, mental mistake…that’s not indicative of how we typically play. So we’ll have to get back to basics.” 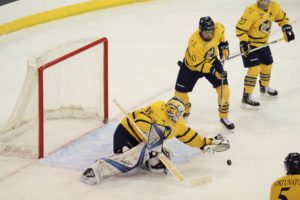 [/media-credit]Even though the Bobcats had 11 scoring chances in the third period, the goal felt like a dagger. And if that goal wasn’t a dagger, then Panowyk’s second goal with less than four minutes left in the game certainly was. Panowyk skated into the Quinnipiac zone as forward Josh McKechney sent him a saucer pass from center ice that would land in the slot. Panowyk got the puck and moved left-to-right as he shot the puck past Shortridge’s right blocker.

The goal capped a disaster of a weekend for the Bobcats, as they are looking at the possibility of dropping out of the rankings. Saturday’s loss will also be regarded as a bad one, as Colgate was picked to finish second-to-last in the ECAC coaches poll and to finish in last in the ECAC media poll.

The Bobcats travel next weekend to play at RPI on Friday and at Union on Saturday in two games that suddenly feel like must wins.

“We’ve got to work hard this week, I know that,” McKernan said. “We’re ready to work hard and get back to it, go to New York next weekend and have a good weekend.”