No. 11/13 Quinnipiac men’s ice hockey comes up short against No. 18 Cornell 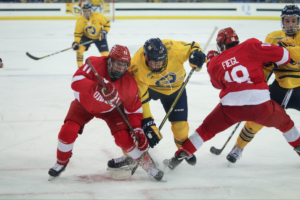 Junior goaltender Andrew Shortridge got the nod in net and stopped 18 of 20 shots, while forward Matthew Forchuk hit a milestone in the game as he scored his first career goal. However, it was not enough as Cornell’s size and physicality seemed to be the difference maker on Friday.

Junior captain Chase Priskie noted why the Big Red’s playing style is so difficult to compete against.

“They’re just a big team,” Priskie said. “They commit to playing their style and don’t deviate from that and that’s what makes them successful.”

Size, however, wasn’t the only thing that got the Big Red the win. 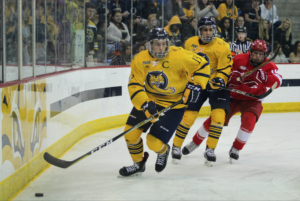 [/media-credit]Cornell defenseman Brendan Smith scored a on a feed from forward Beau Starrett to put the Big Red up 1-0 in the second period. The second goal, which proved to be the game winner, was not something the average fan sees every day.

Cornell forward Jeff Malott took a shot from the point on the power play and appeared to hit Cornell forward Morgan Barron. Shortridge lost track of the puck after it deflected off of Barron and it went over Shortridge’s shoulder and into the net.

Quinnipiac head coach Rand Pecknold recognized that while it was a fluke, it certainly wasn’t used as an excuse for the loss.

“It’s a tough one to lose when you don’t play your best, and certainly that second goal was a complete fluke, and it happens once in awhile, but it’s a tough pill to swallow when you lose a game like that,” Pecknold said. “In the end we need to play better. We need to be a better team.” 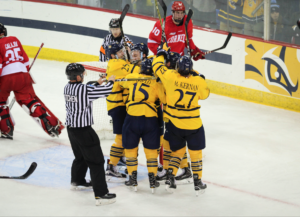 [/media-credit]Quinnipiac did respond well to this goal as freshman forward Matthew Forchuk buried his first collegiate goal less than two minutes after Cornell’s second goal late in the third period.

The former AJHL star banged home a pass from junior forward Scott Davidson just outside the crease to get the game to within one goal.

“Obviously it feels good,” Forchuk said. “It’s been a few games, so to get that first one out of the way definitely feels good.”

The goal energized the Bobcats to have numerous opportunities to close out the game, including junior forward Craig Martin blasting a slap shot that rang the crossbar.

Quinnipiac was unable to knot the game up at two apiece despite showing much more desperation than the Big Red late in the game.

Cornell freshman goaltender Matthew Galajda (28 saves) combined with a group of shot blocking defenseman was enough to finish the job for the team.

Quinnipiac will go to work again tomorrow against Colgate at 7 p.m. at the TD Bank Sports Center, while Cornell travels to Princeton for an ECAC showdown of its own.