Cait’s Column: Quinnipiac’s offense will round out in ECAC play 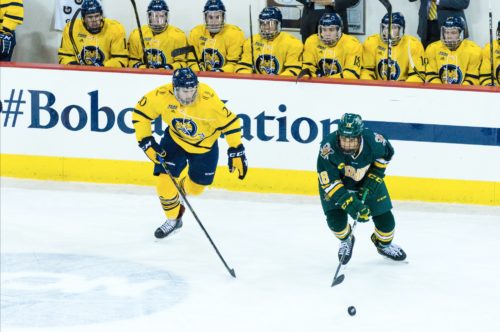 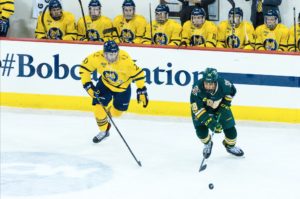 [/media-credit]“Don’t you guys know that nothing has changed since last week?”

But despite the gameless week, there have actually been a few notable topics surrounding the Bobcats.

The rankings follow Quinnipiac’s 3-1-1 record to start the season, all against Hockey East teams, but the transition to conference play begins at home on Friday against Cornell. 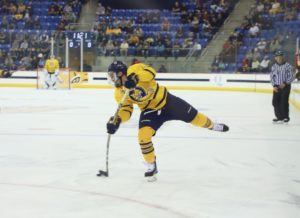 [/media-credit]While it’s an impressive feat to begin the season with a positive record against non-conference opponents, the team knows how important ECAC games will be moving forward.

“We have the same mentality going into every weekend,” junior captain Chase Priskie said. “We look to sweep every weekend and that’s our goal right now, we’re just preparing for both styles of play.”

The mentality Priskie mentions has been more than apparent throughout the first five games of the season. Despite not having an gamebreaker like Sam Anas or Matt Peca at forward, the team game of Quinnipiac has been evidently progressing over the course of the month.

Since going 0-1-1 in its first two games, recording just three goals, Quinnipiac has won each of its last three games and registered a total of 12 goals in that span.

While forwards like freshman Odeen Tufto, sophomore Alex Whelan and senior Tanner MacMaster have stepped into the limelight in terms of offensive production, older players like junior Thomas Aldworth, junior Craig Martin, senior Landon Smith and senior Bo Pieper have yet to heat up.

While keeping the small sample size in mind, relative to last season all of the forwards mentioned above have been under producing through five games.

On top of a clearly stellar d-core and goaltending tandem, Quinnipiac’s offensive production coming primarily from younger forwards this season is an early indicator that the offense as a whole has not yet peaked by any means.

Expect the Bobcats to flourish as a top-two team within the ECAC this season.