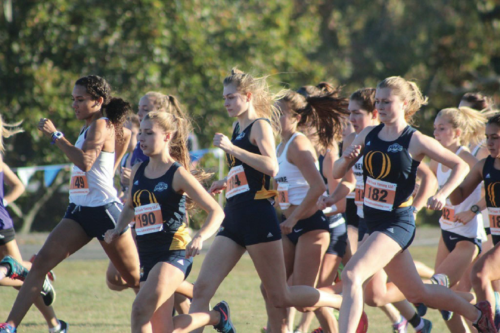 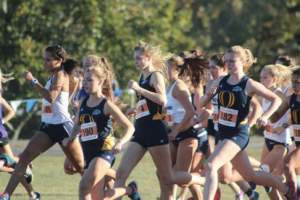 [/media-credit]In the Quinnipiac women’s cross country locker room, Bobcat blue and gold has given way to an overhaul of black and orange. The contrasting colors wash over the locker doors, separated by postings of inspirational quotes and various candies and chocolates.

It’s a steady transformation that takes place in just a week’s time. The team arrived on Monday, Oct. 23 to find a handful of lockers doused in decorations and treats. Tuesday, a few more took on the same appearance. One or two more followed on Wednesday. Walking into the locker room each day to find more decorations feels like driving home on crisp winter evenings and noticing a new house littered with Christmas lights as the holidays neared.

Welcome to Halloween in Hamden, where the cross country team begins its unique festive celebration. The tradition, which the team calls ‘Boo!,’ takes place every Halloween week leading up to the MAAC Championships, which began this Saturday.

The girls make sure their locker room is fully decked out before heading to the biggest race of the season.

‘Boo!’ is a time for the team to show their appreciation for one another, bringing the concept of Secret Santa to the Halloween season, or more importantly, the conference championship season.

Each runner draws a random teammate from a hat and picks a day of the week to decorate the locker of whomever they picked in an effort to boost morale and decrease tension heading into the biggest race of the season.

“They do a surprise where they get each other their favorite things for that week,” head coach Carolyn Martin explained. “It’s a team thing. You’re trying to get each other motivated for the MAACs (Championships).”

Meanwhile, the men’s team will be looking to provide their own surprise outside of the locker room and at the finish line in Holmdel Park this weekend.

Picked eighth out out 11 in the preseason poll, the Bobcats planned on making an unexpected mark on the tournament Saturday afternoon after finishing seventh each of the past two seasons.

“We’re shooting for a top five finish, possibly top four,” sophomore Tommy Consalvo said. “We have the weapons to make that happen.”

While the team doesn’t practice an annual tradition like the women’s team, it enjoyed its own impromptu celebration at practice on Tuesday.

Heavy rain began to pound the ground around the runners’ feet as they made their way through the practice run. It wasn’t ideal conditions, but the Bobcats made the most of it.

“When it was raining, it turned into one of those really fun workouts,” head coach Josh Glaab said. “They’re stoked and excited for this weekend. That’s the best attitude you can have.”

The unexpected downpour was welcomed by a team looking for a cleansing of past trials and misfortunes that hamstrung the team for much of the regular season.

While the women’s team room was saturated by décor, the men’s locker room was ravaged by illness. A nasty cold swept through the roster last week, taking down sophomore Michael Kiernan and junior Ben Lanza.

“It scared the crap out of me,” Glaab said. “I was scared we wouldn’t be ready for this week.”

Fortunately for the Bobcats, the team is back to full health and feeling whole again as they prepare for the conference championships, rain or shine. 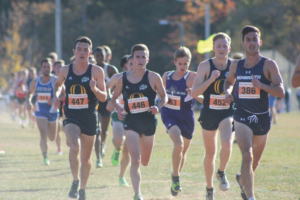 [/media-credit]“We’re such a small team,” junior Ryan Ansel said. “If we lose three guys, that’s a fourth of our roster. There’s been those ups and downs, but I think right now we’re ready to take on the big show on Saturday. We’re all coming together at the right time.”

If the men’s team were to decorate their lockers with encouraging quotes, the most relevant one might be from Vivian Greene: “Life isn’t about waiting for the storm to pass. It’s about learning to dance in the rain.”

While the men’s squad entered the championships as an underdog, the women looked to blaze a path of redemption after missing out on a first place finish by a mere two points in Florida last season.

The Bobcats are led by a pack of seniors who won it all in 2015 and are hungry for a return to the top, and will feel more at home in the hills of Holmdel, New Jersey than they did last year in the Sunshine State.

Rather than jogging the flat plains of steamy Florida, both teams will be able to flex their muscles in the hills of Holmdel Park, giving the Bobcats a ‘Giant’ advantage.

To prepare for the MAAC Championships last season, Martin had her team running in long sleeves during the warmer months to prepare for the scorching Florida heat. With more inclines at Holmdel Park, Martin took her squad to nearby luxury Sleeping Giant State Park.

“When we previewed (Holmdel Park) in September, we got down the hill we said if we can run up the Giant, we can handle any hill that’s in our way,” senior Emily Wolff said.

A Colorado native, Wolff has been bred to take on inclines, and figures to be a leading force for the Bobcats come Saturday.

“She’s going to eat it up,” Martin said with conviction.

The men’s team shared the same confidence, thanks to its own prolonged preparation.

The men’s team had to conquer some hills along the way to surprise the crowd and finish among the top in the conference. It will be tough, but the team has overcome uphill climbs all year, both literally and figuratively.

Fast forward to Monday in Hamden. Shredded tree branches and power lines litter the roads, as a vicious storm swept through town, cutting power and setting fire to transformers on Whitney Avenue.

The men’s team may have enjoyed a rainy practice the week before, but a run in these conditions seems irrational.

The team was recovering from an eighth place finish at the MAAC Championships as the result of a tiebreaker that dates back to the regular season.

“The results don’t tell the whole story,” Glaab explained. “The individual results are a much better indicator of the impressive growth that happened this season.”

Glaab is certainly not wrong. After a 79th place finish last season, Ansel skyrocketed up the ranks and finished a team-leading 14th. Consalvo jumped from 55th to 25th, while Tyler Mannion moved up almost 50 spots to 59th.

It wasn’t the desired finish, but the blueprint is in place for a successful 2018 campaign.

The women’s team might be feeling a similar emotion, as the team recorded a third place finish on Saturday. As predicted, Wolff gobbled up the Holmdel hills, leading the team with a sixth place finish.

“Emily came off a tough outdoor season last year and she has come into this year with a new fire,” Martin said. “I am really proud of how well she has done this season.”

Roberts and Kaitlin Bakas joined Wolff in the top ten. Still, for the first time in over a decade, the Bobcats finished below second place, which will be tough to swallow.

This isn’t the end, however, as both teams prepare for the final race of the season at the NCAA Regionals in Buffalo.