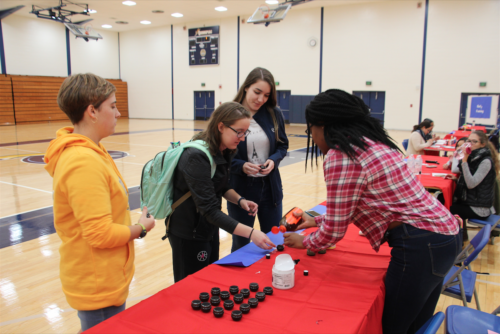 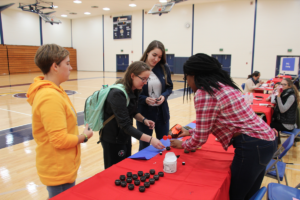 [/media-credit]Women Empowered sponsored its last event for the fall semester, She Leads, at Burt Kahn Court in Monday. The event lasted from 2 p.m. to 6 p.m., and brought multiple groups out to participate in confidence boosting activities.

This is Women Empowered’s first year as a chartered organization. Since the former president of the club graduated last year, senior behavioral science major Zara Khan has taken over the position.

“At this point, empowering other women has become a part of my identity,” Khan said. “It makes me want to exude positivity and encourage others to do the same.”

Women Empowered reached out to sororities for volunteers for She Leads, and Kappa Delta decided to attend and help out with the event. The organization also got in touch with the Latino Cultural Society, who also helped out with the event. 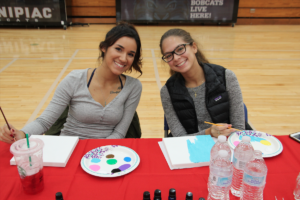 [/media-credit]“Confidence is a big thing for Kappa Delta, and we really wanted to help out with this event for women empowerment,” senior physical therapy major Bridget Sorohan said.

“It seemed like a good event to get involved with,” Torres said.

Even though She Leads was a women-centered event, Khan explained that it was not just a women only event. Men were encouraged to join as well.

Women Empowered set up different tables coordinated to building confidence. Belly dancing and teaching good posture was one of the tables set up for students to participate in.

First the students would watch a video on arm, shoulder and back exercises that contribute to belly dancing. The volunteers at the table explained that belly dancing is a great way to experiment what a body can do.

“I was a dancer in high school and I think dancing really has a positive effect on women’s confidence,” freshman physical therapy major Gianna Marzullo said. “It makes you feel like you can do whatever you want. It also is great way for women to express their individuality.”

Crystal corner was a table with small rocks in a bottle that are supposed to help students with anxiety and such emotions. Even though these rocks cannot, it can serve as a placebo.

For next semester, Khan said she hopes to reach out to the community more. The organization will be teaching children at a local elementary school the importance of women empowerment.

“The glass ceiling still exists and it is up to us to educate others that women’s rights isn’t just a women’s issue, it’s a human issue,” Khan said. 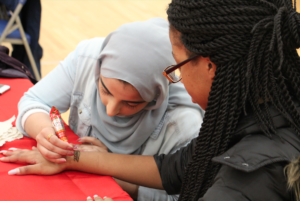 [/media-credit]At another one of the tables at She Leads, students wrote down a negative thought on a piece of orange paper. They would crumple up the paper and throw it out. Next, they would take a pink piece of paper and write a positive thought and put it in a jar.

“I just think that people have been used to stereotypes for such a long time but now women are fighting for their rights,” freshman physical therapy major Tara Della Torre said. “Confidence is a major key in letting the younger generations believe that they can become anything they want.”

Although this was Women Empowered’s last event of the semester, the group plans to continue spreading the importance of confidence in women when spring semester approaches. Everyone is welcome to join.

“She Leads is supposed to be about building each other up, not breaking them down,” Khan said.