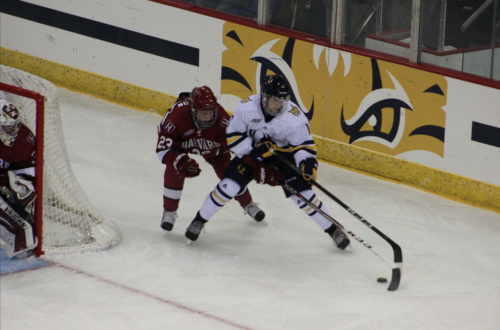 The win comes in the second game of a back-to-back following Friday’s 1-0 loss to Dartmouth, in which the Bobcats registered 61 shots.

Quinnipiac continued its aggressive play in the second period, once again outshooting the Crimson this time by a total of 10-8. Unlike in the first period, the Bobcats were able to find the back of the net when freshman Taylor House scored the first goal of her career on a power play at 3:30.

“We just really worked together, moving the puck around in front of the net and we were really trying to get shots this week early and it worked out,” House said. 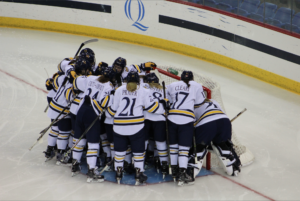 [/media-credit]Taylor acknowledged her goal as a result of the team’s puck movement on the power play.

During the latter stages of the second period, sophomore Kate McKenzie doubled the Bobcats’ lead at 17:36 off an assist by junior captain Melissa Samoskevich, who finished the day with a pair of assists for Quinnipiac.

“I knew we had been in their zone for quite a while and they were pretty tired,” McKenzie said. “I kind of saw ways to be offensive and I jumped in there and [Samoskevich] had a great pass to me.”

Harvard answered back late with a goal from freshman Becca Gilmore at 16:48 that deflected off of the shoulder pad of freshman goaltender Allison Small and into the back of the net. It was the first of her collegiate career, but Quinnipiac continued to hold onto the lead.

The Crimson then pulled Larcom for the final 1:25 to no avail, as the Bobcats held on to upset the Crimson 2-1 for their first ECAC victory of the season.

The Bobcats next play on Friday Nov. 3 at Cornell.