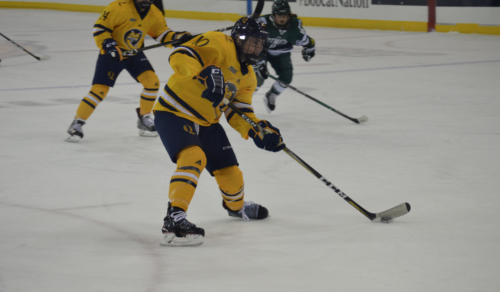 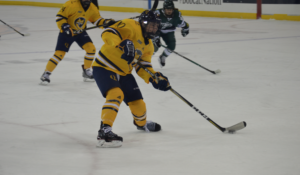 [/media-credit]While Quinnipiac compiled a total of 61 shots on goal, it was unable to get any of them past Dartmouth goaltender Christie Honor. The posts didn’t help the Bobcats out either as junior defenseman Anna Kilponen and junior forward captain Melissa Samoskevich both had scoring chances that hit the iron.

Samoskevich put 10 shots on net that were all stopped by Honor.

“[It’s] definitely frustrating, but as I mature, like into junior and senior year, it doesn’t really get on my back as much as it used to,” Samoskevich.

The Bobcats got off to a fast start, outshooting Dartmouth 10-0 to begin the first period, but ultimately Dartmouth took a lead it would not relinquish.

A bank shot from the point that went off of the boards went right to the stick of Dartmouth forward Alyssa Baker at 14:52, supplied all of the offense the Big Green needed behind Honor’s 61-save shutout.

Quinnipiac had six power play chances, four of which came in the second period, but it was unable to capitalize on any of them.

Dartmouth’s Cecilia Lopez saw the penalty box twice, both times for checking, and the Bobcats’ powerplay went to work. Kilponen was set up on the point during the power plays, but her best chance of the night banked off of the post during the first period.

Kilponen, a North Dakota transfer, was added to the Finnish Women’s National Team roster for the Four Nations Cup.

The return of sophomore forward Kenzie Prater was a big boost to Quinnipiac’s offense. Prater was recovering from surgery on her ankle for the start of the season and Quinnipiac head coach Cass Turner noted Prater’s return to the lineup. 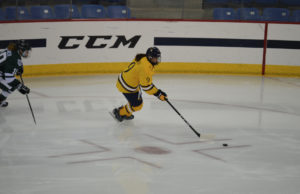 [/media-credit]“Prater just battles,” Turner said. “… She brought a great jump for our team and we couldn’t be more excited to have her back in the lineup.”

Prater slotted back into a center role, which moved junior forward Randi Marcon to the left wing alongside Prater. Marcon took the bulk of the faceoffs, however, going 17 for 24 in the dot.

“They really worked to support each other quickly and I thought they played with a different confidence today than they have,” Turner said.

The line combined for 13 shots on net, but it wasn’t enough to get the win.

“It was a weird game for us. We had a ton of opportunities, we hit a number of posts, we just weren’t able to put the puck in the back of the net,” Turner said of the odd loss. “…Is it eye-opening that the ECAC is a battle? Absolutely. People come to play in our conference.”

The Bobcats return to action at 3 p.m. on Saturday afternoon against Harvard at the TD Bank Sports Center.