Quinnipiac field hockey falls, 3-1, to No. 1 UConn in season finale 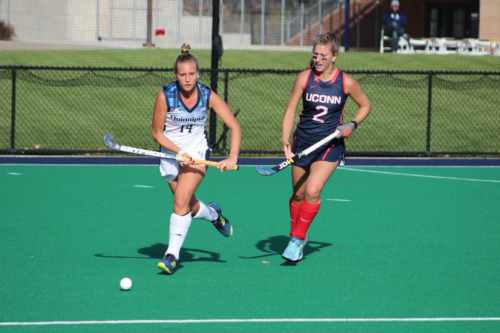 The Quinnipiac field hockey team lost 3-1 to the nationally-ranked No. 1 UConn Huskies on Friday. With the loss, Quinnipiac finished its season with records of 3-4 in the Big East Conference and 6-12 overall. 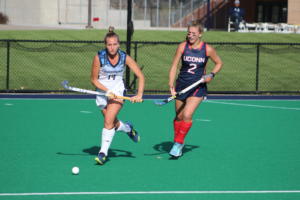 [/media-credit]Despite the loss, head coach Becca Main was happy with the aggressive play style her team showed throughout the game.

“Whenever you have the opportunity to play the No. 1 team in any sport, it’s exciting,” Main said. “When you’re the first team to score on them in Big East play this year or the tenth in general, that puts us in a place where we’ve changed our level of play.”

To start the game, UConn attacked right away and scored on a rebound off the corner. It was senior Charlotte Veitner’s 26th goal of the season at 8:31 in the first half. Quinnipiac responded on senior defenseman Lauren Belskie’s seventh goal of the season that was a direct shot from the top of the circle at 21:03.

With the goal, Belskie finished the season with seven goals, two assists, 16 points and 31 shots on goal. She was pleased with her team’s performance and shared her thoughts on playing  her last field hockey game at Quinnipiac.

“Our team came a really long way and we went into this game optimistic and played better than we expected,” Belskie said. “I went from being a freshman who didn’t play a lot, to a starter who played 70 minutes. I’m proud and thankful for my teammates and coaches who pushed me to be in this position.”

Although she didn’t show up in the scoring column, senior midfielder Dayna Barlow had one shot on goal. She finished the season with seven goals, four assists, 18 points and 22 shots on goal. 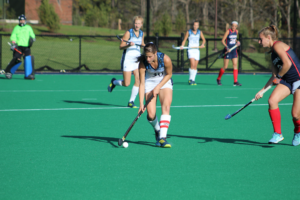 [/media-credit]Barlow was happy with the improvements the team made throughout the season and mentioned how much Main means to her.

“I’m just very proud of this team, we ended the season on such on high note and I was lucky enough to start as a freshman and still be able to start today,” Barlow said. “Main has just been an inspiration to me, she has made me a better person and I’m thankful that she gave me an opportunity to play for this team.”

With the loss of nine seniors, the Bobcats will still have players such as sophomore goaltender Livy Golini who has played in all 18 games this season, and has two shutouts.

Main was sad to see the seniors go, but was still optimistic about the future of her team next season.

“The future of this team was put in the hands of nine seniors. We discussed the legacy that they left,” Main said. “I’m really pleased at where we’re at and we’re peaking at a time, where we’re supposed to be peaking.”