OPINION: Baseball is back 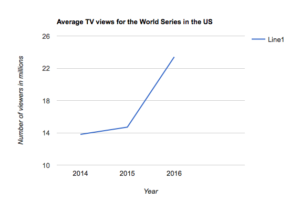 [/media-credit]Just a few years ago, baseball was a dying sport. The 2014 World Series between the San Francisco Giants and the Kansas City Royals was the lowest rated ever according to Nielsen ratings.

It clocked in at just an average of 12.2 million viewers a game. To compare, Nielsen reported that the Super Bowl that year between the Broncos and Seahawks had 111.5 million viewers. The final score of the Super Bowl was 43-8, an absolute blowout, yet nearly 100 million more people tuned into the game than the World Series.

Baseball was dying because it was losing the young demographic of viewers from ages 13 to 34. In fact, Sports Business Daily reported that the average Major League Baseball viewer is 55 years old.

Major League Baseball has tried to make rule changes to speed up the game, to fit in with the short attention span of millennials, including adding a pitch clock, removing intentional walks and limiting the number of trips coaches can take to the mound during an inning.

These changes were met with backlash from players, including Kansas City’s Brandon Moss, a member of that 2014 World Series team.

“I’m just very glad I will not be playing this game in 10 years,” Moss told the Sports Business Journal. “It won’t be recognizable. It’s going in a direction where it’s not the same game.”

With players objecting to rule changes and viewers refusing to tune into games, Major League Baseball was running out of solutions. However, former commissioner Bud Selig’s changing of the Wild Card rules to two teams instead of one helped increase September ratings because more and more fan bases had the hope that their team could make the one game Wild Card playoff.

Since that rule change, the Sports Business Journal found 11 of the 12 strongest local TV ratings came from teams that were fighting for a Wild Card spot.

The Yankees’ deciding Game 5 against Cleveland pulled in 7.6 million viewers, up 22 percent from the 2015 ALDS Game 5 between Kansas City and Houston.

Sure, the Yankees being in a major market and one of the most polarizing organizations in sports helps, but baseball has been on the rise since last year’s World Series pulled in record numbers as well.

The Chicago Cubs and Cleveland Indians deciding World Series Game 7 was the highest-watched baseball game in 25 years, clocking in with a Nielsen rating of 25.2. For comparison, the NBA Finals Game 7 between the Golden State Warriors and Cleveland Cavaliers from earlier that year had a rating of just 18.9.

So, what do all these numbers really mean?

This year, the Yankees have captivated fans, driving Fox Sports ratings and proving that any team can find themselves in contention.

In the Cleveland series alone, the Yankees blew an 8-3 lead in Game 2 to lose in extra innings, just to come back and win three games in a row to win the series. Despite being an underdog and facing elimination, New York clawed back and was able to upset a team most experts had in the World Series.

The past two years, postseason baseball has made a triumphant return, and it is no longer the dying major sport in the United States. As we watch football ratings continue to decline over the past years, including a 7.5 percent drop in ratings from the first six weeks of last season to this year, and the NBA become more and more imbalanced, America’s Pastime is at its strongest point.

Sure, baseball may not be as action packed, but I think the late Earl Weaver, one of the greatest managers in baseball history, put it best:

“You can’t sit on a lead and run a few plays into the line and just kill the clock. You’ve got to throw the ball over the damn plate and give the other man his chance. That’s why baseball is the greatest game of them all.”

If this postseason has showed us anything, there is no such thing as a guarantee. So, buckle up, because I have a feeling the 2017 World Series is going to be one for the ages.