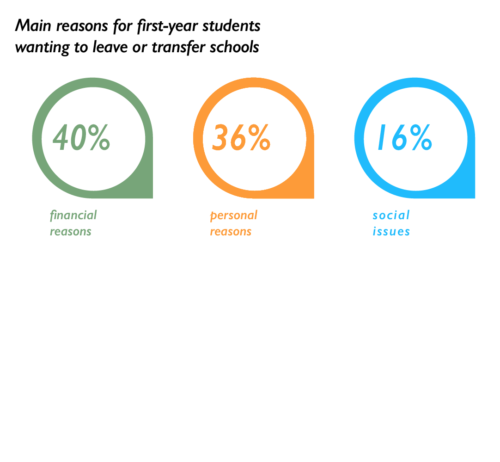 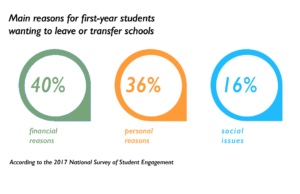 [/media-credit]A 2017 report from the National Survey of Student Engagement (NSSE) exposed the main reasons for first-year students wanting to leave school or transfer from one institution to another.

In 2013, Quinnipiac conducted its own survey to find out reasons why a student may consider transferring to a different institution. Even though this particular data is not available to the public, Andrew Delohery, associate vice president for retention and academic success at Quinnipiac, said that the main factors from the NSSE study line up with the results from the Quinnipiac survey.

The Quinnipiac study is only done as needed, according to Delohery. The need in 2013 was to test if it was an effective way of getting data from this part of the Quinnipiac community, but there is no set schedule for this type of study.

“Consequently, we have been developing various comparison processes to gain better insight to this audience,” Delohery said in an email.

Freshman Freya Eclar already plans on leaving Quinnipiac. As a commuter student, Eclar thinks she’ll transfer at the end of her sophomore or junior year due to her mother moving to California for work.

“If I were to live here, it would add more to the cost, because of my family not being here,” Eclar said.

Junior Kristin Guerrette said that she had friends who transferred out of Quinnipiac. Guerrette said the campus culture causes people to stick with similar individuals, instead of trying to meet new people.

“We have clubs that are about diversity and things, but it’s still a very ‘clique-y’ school,” Guerrette said. “That’s something I don’t like about Quinnipiac.”

As far as going about making improvements, Delohery insists that it’s a matter of students communicating what they want out of their Quinnipiac experience.

“Retention actually begins with a clear understanding of expectation. Students build their expectations often before they step foot on campus,” Delohery said in an email.

Delohery pointed out that the school has been trying to do a variety of things to address issues brought up in the surveys, from pursuing more engagement from students through Residential Life activities to providing resources for students to help them become financially literate.

Sophomore Sophia Toppo considered transferring at the end of her freshman year, her reason being that she wasn’t comfortable with her friends and her classes. However, she decided to stay and thinks this semester is treating her well.

“Maybe you should try to work through it instead of transferring and getting an easy way out of it,” Toppo said. “You never know what could happen.”

Senior William McDermott has one friend who decided that he didn’t fit in with the culture at the University of Tampa, and decided to transfer to Quinnipiac.

“It was too much of a party scene, and he wanted an actual education,” McDermott said. “He wanted to come out of college with something.”

Even as someone who is definitely leaving, Eclar still thinks that it’s worth it for someone thinking of transferring to see what could happen in the future at Quinnipiac.

“If you want to transfer, that’s your own decision,” Eclar said. “College is a time when you’re exploring yourself, so don’t feel like you’re alone. Be yourself and you’ll eventually find your place here.”