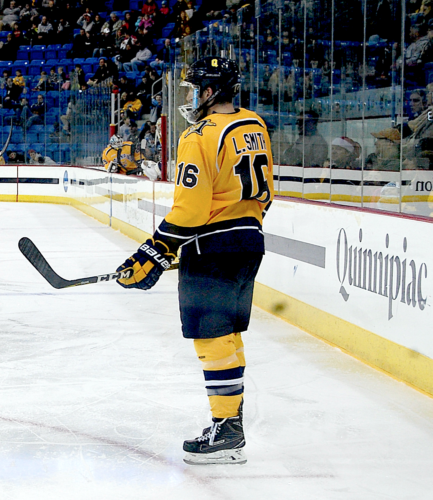 [/media-credit]It’s no secret that the senior’s trademarked snapshot has tormented goalies over the course of his collegiate career.

The majority of his 39 career goals have come in the form of a professional flick of the wrist from along the boards that teammates alike admire.

“He has a great shot. I wish I had that kind of release,” junior forward Craig Martin said.

But on Saturday, Smith quietly reached point No. 100 in his career with a secondary assist on junior captain Chase Priskie’s first goal of the season.

It’s one of the many smaller contributions Smith offers that the average fan might not appreciate enough of.

Although he doesn’t wear a letter, Smith is one of five seniors that carries a leadership role on a relatively young Quinnipiac team.

Offensive-minded forwards, like sophomore Alex Whelan, value the opportunity to learn from a player like Smith in underclassman years.

“He’s one of the older guys on the team, he’s been here through a Frozen Four, so he kind of guides the younger guys and tells us what to do,” Whelan said. “He’s always a leader off the ice. People don’t always see it as much, but he’s always there.”

Whelan, who has unleashed a lethal snapshot of his own this season, has scored four goals in his first five games to start the year. To his benefit, he has been able to absorb the more intangible aspects of Smith’s game, while coincidentally keeping it light as well.

“We always have a saying before [games] because we like to shoot a lot…‘Shooters shoot,’” Whelan said with a grin. “I’m always looking up to him for advice.” 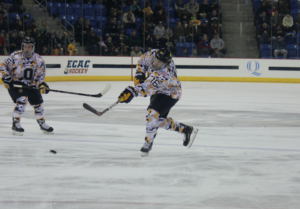 [/media-credit]But like his record-setting assist on Saturday, Smith’s shot is certainly not the only aspect of his game. Over the course of his illustrious career, he has earned 61 career assists through well-rounded play.

Primarily playing with linemates Sam Anas (‘16) and Travis St. Denis (‘16) for the first two years of his career gave him an extra boost in his own underclassman days.

“Playing with those guys, as well as many others — Matt Peca, Soren Jonzzon, etc. — was not only huge for my hockey career, but also my life outside of hockey,” ,” Smith said. “Those guys took me under their wing as a freshman and taught me what it meant to be a Quinnipiac hockey player, on and off the ice.”

Smith has carried that over into his time as an upperclassman.

Last season, he led the team in scoring while on the top line with now-senior forwards Tanner MacMaster and Bo Pieper, while this season he and MacMaster have groomed freshman Odeen Tufto throughout the first five games.

“I have been extremely impressed with [Whelan] and Tufto this year,” Smith said. “It’s obvious that those guys are big time players and it’s important for the team to have guys like that around.”

In those five games played, the Bobcats’ first line has combined for 17 points in 2017-18.

Pecknold trusts that line more than any other to get the job done offensively and oddly enough, out of the three linemates, Smith sits with just three points as opposed to eight from Tufto and six from MacMaster. 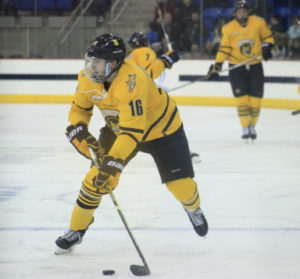 [/media-credit]Despite an atypical stat line to start the season, Smith joined an elite 100-point club as the 39th member in program history, and his team-first mentality remains apparent.

“It was always kind of in the back of my mind but my main focus is on the team,” Smith said. “…Personal accolades are awesome, but what really matters is how the team is doing and what I need to do to help the team win.”

And they are doing just that.

Quinnipiac took a five-spot leap to No. 13 in the USCHO.com rankings after the weekend sweep. The Bobcats look to keep the trend going as the season progresses into conference play.