Pedaling for a purpose 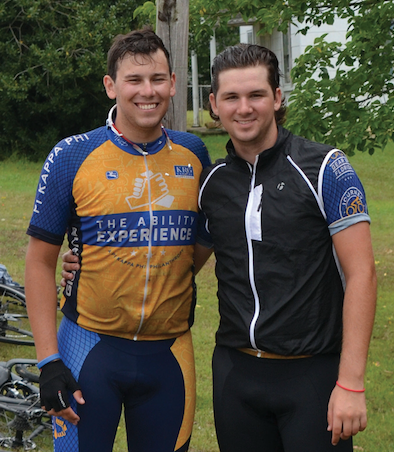 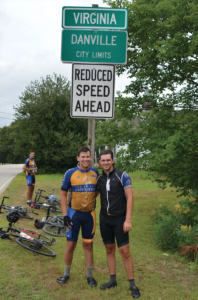 [/media-credit]“If it isn’t the hottest day today, then it is tomorrow,” Murphy Siegel, who biked across the entirety of the United States this past summer, said.

Siegel, a senior from Port Washington, New York, decided to bike all the way from Long Beach, California to Washington, D.C.

Peter Beckwermert, a senior from Wayne, New Jersey, participated in the race alongside Siegel. Last fall he saw Siegel had signed up and felt like it was his chance to do the race.

“After I registered, I was nervous and excited at the same time,” Beckwermert said. “We both had training and fundraising ahead of us, both of which are large tasks.”

The brothers of Pi Kappa Phi spoke about The Ability Experience in 2013, the largest fraternal fundraising and awareness of its kind, and how they help support people with disabilities. Among the crowd were students Spiegel and Beckwermert.

The brothers worked with The Journey of Hope, a cross-country cycling trek, to raise awareness for children with disabilities. The Journey of Hope reaches out to people through newspapers, radio, television, civic groups and community leaders, reaching millions of people annually and bringing to the forefront the abilities of people with disabilities.

Pi Kappa Phi is the only fraternity in the country to have created its own philanthropic partner, according to The Ability Experience.

“I’ve done some community service in the past, but nothing of this magnitude,” Siegel said. “Before this, the most I’d done was cook meals for the homeless.”

Siegel was inspired to join since his aunt was a music therapist for kids with disabilities. Ever since that first meeting with the brothers of Pi Kappa Phi, Siegel knew he wanted to be a part of the brotherhood, so he made a promise to himself that he would run the race in its entirety.

Pi Kappa Phi came up with a great fundraising idea involving  all of Greek life, where sororities compete to become their national sponsor and the result was more than they expected. Kappa Delta and Kappa Alpha Theta together raised $2,500 for their cause, which was one of many hurdles they faced.

The Journey of Hope is one of the things Pi Kappa Phi showcases to people to at rush events and ever since Beckwermert saw it, there was a part of him that had always wanted to do it.

“When I first told my friends, they thought I was crazy,” Beckwermert said. “I’ll always remember those two months. It was probably one of the hardest things I’ve ever done, physically and mentally, but I learned so much from it. The experience was just incredible all around.”

Joel Vanner, one of Siegel’s roommates, met him before he left for his trip.

“Murphy is a really down-to-earth-guy- always down for a chill conversation about anything,” Vanner said. “He was excited for the trip, the experiences he’ll have. He came back a little richer both in terms of winning at a casino and the experience as a whole.” 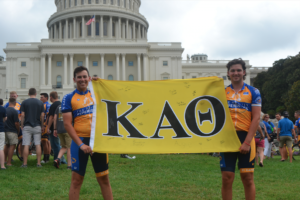 [/media-credit]Senior Ryan Lynch, 21, knows how dedicated Siegel can get.

“One thing about him is that he sets his mind to something and sticks with it,” Lynch said. “To bike across the country is an incredible thing to accomplish. A lot of people say that they will do this event but Murphy followed through with it. You have to respect that.”

Lynch knew that Siegel joined Pi Kappa Phi for the opportunities it had to offer.

Lynch, knowing Beckwermert from intramural volleyball, describes him as someone who has always been out to achieve his goals and to be focused on what he would do.

“Peter said that he learned a lot about himself from the experience over the summer,” Lynch said. “He was lucky to have had the opportunity to spend his summer doing what he did.”

In honor of his last year at Quinnipiac, Siegel wanted to participate in the race he’d been dreaming of since his freshman year. He would stop at organizations across the country that specialize in helping people who have disabilities.

“It sparked a whole different appreciation for people with disabilities,” Siegel said.

For the journey, Siegel and Beckwermert knew they would have to train extensively for the race. There was a training program, which they did their best to follow. The training program used a small software that the Tour de France used as well. Although they didn’t train as much as they should have, they still managed to finish.

“I could have trained more if I’m being honest,” Siegel said. “Truthfully, you can’t train for something like this. You never know how the weather is going to change or how different things can affect your ride.”

Beckwermert also acknowledged that they could have trained harder.

“I will never forget the feeling after finishing a hard ride,” he said. “I think both of us would agree we went into the trip undertrained, which made the first few rides a struggle.”

There were three different routes taken on the trip: North, TransAmerica and South. Siegel and Beckwermert were a part of the South route with 25-30 cyclists per team. The inaugural team started with just 21 team members, which later expanded to the three different routes of 35 Pi Kappa Phi’s. The team annually raises more than $500,000. All routes meet in Washington, D.C. by the end of the ride.

“The places we saw and the people we met are unforgettable,” Beckwermert said. “It was a once-in-a-lifetime experience.”

Each cyclist also had the task to raise $5,500, and in the end, The Ability Experience managed to raise over $700,000 for its philanthropy.

Throughout the trip they stayed in YMCA’s, churches, high schools and any other civic organizations or community groups that would have them. All of these things are planned out in advance by The Ability Experience staff in Charlotte, North Carolina, with plans already starting for the next trip.

Lasting a little over 60 days, Siegel said the most difficult part was being awake at 5:30 a.m. everyday. They ate a small breakfast and would have to leave by 6:30 a.m. Then they would be on their bikes until 3:30 p.m., with the latest time being until 4:30 p.m.

“We biked through rain or shine, 110-plus degrees in Death Valley, 10,000 feet of climbing in Arizona,” Beckwermert said. “There was never an easy day on the bike.”

Crew stops were encouraged along the way. The cross-country trip was supported by six crew vans, which held snacks and water to keep up the overall morale of the group.

Siegel’s longest day was in Louisiana, where he rode for 120 miles. A hard enough task, Siegel managed to stick it out, even though he was behind everyone else.

Siegel knew that some days were worse than others, but nothing compared to the feeling he had when he finished his ride.

“Nothing will ever compare to the feeling I had when I finished the race,” Siegel said. “I’d do anything to have that feeling back.” 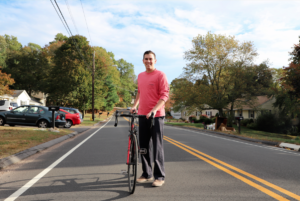 [/media-credit]Beckwermert knows that nothing will ever compare to the feeling he had when finishing the race.

“After the summer ended, I can say I have 37 lifelong friends that I developed a bond with through hellish rides and spending every waking minute with for two months,” he said.

Siegel and Beckwermert made countless memories throughout their 60 days of traversing the continental U.S. and say they are forever changed because of it.

“I met a bunch of incredible people and got to see the country in such a unique way,” Beckwermert said. “I’ll always remember those two months.”

Jacqueline Schmedel, Siegel’s girlfriend, describes him as someone who would always do the right thing and as someone who is affected by everything that he sees in his community.

“I think Pi Kapp brought about a lot of his awareness about differently-abled people, but he cares about people in general so deeply that it wasn’t a huge shock that he wanted to do this,” Schmedel said. “Murphy is not a super athletic person- he didn’t choose to do Journey of Hope because it involved biking across the country. In fact, I think that was the downside. He did it so he could positively impact as many people as possible.”

Not an easy trek, Siegel and Beckwermert managed to complete this trip along with other brothers of Pi Kappa Phi, sponsored by many different locations across the country. As his journey ended, more men will continue to participate in this trek as the years go on.

“It’s one thing to take cool pictures and say you did a cool thing, it’s a whole new ball game to use that experience to change the community you live in,” Schmedel said.