The power of poetry 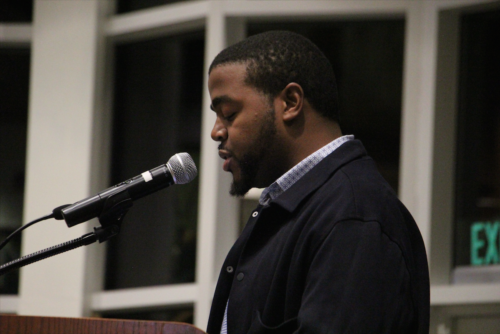 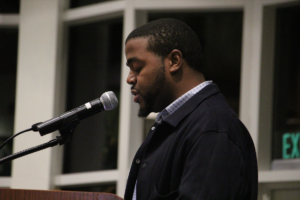 [/media-credit]Three award-winning poets visited Quinnipiac on Oct. 19 to read their work as part of a panel titled, “Latinx/LGBTQ Intersections.” The event marked the tail end of a series of programs in honor of LGBT History Month, a month-long observance of lesbian, gay, bisexual and transgender history, and the history of gay rights and related civil rights moments.

In a time in which President Donald Trump has imposed discriminatory policies, professor Jason Koo started off the evening by addressing the audience with a remark about Latinx Heritage Month before introducing the poets.

“You may know what’s going on in the United States and beyond, most of which is terrible,” Koo said. “I am particularly glad that we had this event today to raise awareness about specific communities and consider these particular poets close to my heart.”

Poets Rosebud Ben-Oni, Darrel Alejandro Holnes and Bessy Reyna detailed their inspiration behind each piece and answered questions from the audience following their readings.

With her mother’s Mexican heritage and her father’s Jewish religion, Ben-Oni writes weekly for the Kenyon Review blog and teaches creative writing at the UCLA Extension’s Writers’ Program.

Ben-Oni was the first featured poet as she started with two poems. She says “She Calls Once That Is A Lie” and “Matarose Tags G-Dragon on the 7” were inspired by her first love, who she says played with her for 10 years. She later mentioned how she ended up marrying a man and said that she identifies as a queer the same way she identifies as Latinx.

“I think origins are constantly evolving, but I didn’t always believe that,” Ben-Oni said. “After graduate school, I got a fellowship to the Hebrew University of Jerusalem and tried to make a life in Israel. At the time I was queer and suffered a lot of setbacks because of my background. It doesn’t make me any less Jewish because I’m not a native-born Israeli and it doesn’t make me any less of a Latinx because my father is a Jew.”

Ben-Oni finished with a poem dedicated to Darrel Holnes entitled, “Odisea,” a hard take on the Odyssey that appeared in the literary magazine, TriQuarterly.

In addition to writing poetry, Holnes is a playwright and an assistant professor at Medgar Evers College and the Gallatin School of Individualized Study in New York.

Holnes first addressed the audience, reflecting on his two years of experience at Cave Canem, a summer workshop for African-American poets. During this time, he was introduced to Toi Derricotte, co-founder of the Cave Canem Foundation, who had given him a piece of advice that has stuck with him to this day.

“She always encourages writers to write about what they’re afraid of and to face their fears in poetry,” Holnes said. “I was much younger and was dealing with internalized homophobia at the time when I was just dumped.”

Holnes decided to face his fear of performing in drag by writing the poem, “I Always Promised I’d Never Do Drag.” Holnes shared this heartfelt poem before reading another piece about finding love on a first date with someone, which he says was inspired by his love for Shakira. 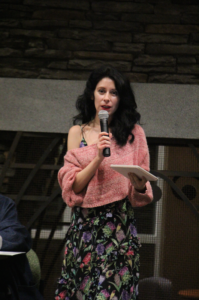 [/media-credit]In the wake of the horrific Orlando nightclub shooting last year, Holnes revealed that writing “All Legs Lead to Naomi Campbell” was the only poem he was able to write while in residency at Washington College in Maryland.

“When I heard the news of the shooting, I completely froze and couldn’t write a word, so I called Rosebud,” Holnes said. “We talked for hours and cried together, reflecting on the terrible events that just happened and I couldn’t help but think about all of the potential that was lost that night. These types of moments made me realize how important it is to have support from other people in your community who are sometimes the only ones who understand what you’re going through.”

Holnes concluded with a reading of “Amending Wall,” inspired by Robert Frost’s “Mending Wall.” His final piece addresses the matter of figurative walls and geographic boundaries in our society that forces people to be on different sides. As someone who has three distinct identifies, poet Bessy Reyna knows all too well about these borders.

Born in Cuba and raised in Panama, Reyna is a writer and former opinion columnist for the Hartford Courant. Her bilingual work has appeared in many literary anthologies in the United States and Latin America. Reyna chose some of her work she felt was a transformation of something that she’s seen or has read. She said her first poem, “Is This Really Broad Street?” represents the transformation of a vision into creativity and how she was able to explore just one image that gave her the idea for the poem.

Reyna then read a story that was published she considers as more of a memoir about how she was hiding everything inside. Her piece, “So That You Will Hear Me” was featured in Paul Neruda’s 20 love poems, which she says is the most essential poetry you can read if you ever want to know what love is about. Reyna ended with “The Boys I Loved (and who loved me),” a personal reflection on young love.

Since the election, Ben-Oni, Holnes and Reyna agreed a lot has changed as there is some sense of urgency to write about their identifies and various communities.

Ben-Oni said the day after the election, her father called her from San Antonio, Texas, saying someone put a swastika out of stones on their lawn. She added that it was the first time her mother’s family has asked her not to write about some of their multicultural history.

Holnes also said the election took an emotional toll on him as he didn’t know what to say at first.

“There were so many voices and I just wanted to shut it all off and sit in silence for a while,” Holnes said. “What came out of that silence was a new commitment to compassion and empathy. Even learning the art of disagreement, which has to do with hearing another person out. I’m really trying to practice empathy and understand where someone might be coming from.”

Holnes said this lead to the art of gratitude.

“Every day I would wake up and name three things I’m thankful for,” Holnes said. “For me it was hard to keep a healthy perspective without feeling like the world was coming to an end. The hate crimes, hate speech and the hateful rhetoric that continues to grow can leave you in a place of despair. It left me looking for hope and I found that in celebrating my friends, family and other writers every day.”

Reyna had similar emotions and reflected on her experience as an opinion columnist as a valuable opportunity to have a voice.

“For me, writing is not just poetry that I hope will transcend and find a common element in someone else’s life, but also a way to awaken people to the social issues that are really important to me,” Reyna said.