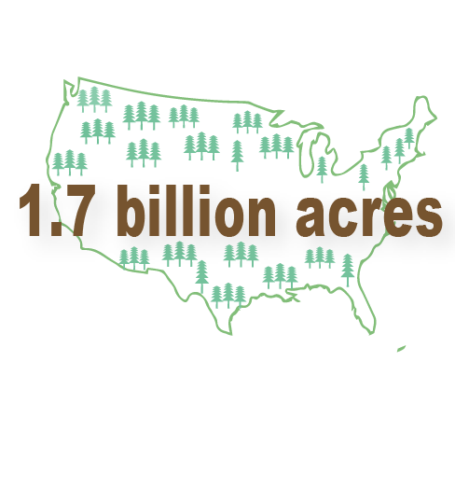 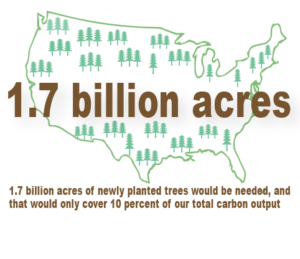 The amount of acres of trees needed to make a significant impact on the projected climate trends would be catastrophic for the planet’s ecosystems and food supply, according to research published in the science journal, Earth’s Future.

To reduce carbon emissions by three billion tons annually, 1.7 billion acres of newly-planted trees would be needed, and that would only cover 10 percent of our total carbon output.

While this would certainly have a positive influence on global warming and would yield a reduction of greenhouse gasses, 1.7 billion acres is roughly the size of the continental US, which represents half the worldwide agricultural land area.

Devoting this much space to new plant life would disrupt an already distressed ecosystem, and exacerbate the food supply crisis by taking up valuable farmland, according to.

The biggest enemy of a healthy atmosphere is the sheer volume of carbon being emitted into the air by human activity. If the 30 billion tons of atmospheric carbon could be reduced, global warming’s progression would be slowed dramatically.

Pieter Tans, chief of the National Oceanic and Atmospheric Administration, stated that while emissions seem to be steadying, they are still at a dangerous level, according to an article in The New York Times.

“If emissions were to stay flat for the next two decades, which could be called an achievement in some sense, it’s terrible for the climate problem,” he said.

As to ways this can be achieved on an individual level, there are many simple things that you can do to help this issue. For example, an estimated 13 percent of US carbon emissions comes from transporting food long distances. By buying locally-sourced, organic food, this huge expenditure of CO2 can be largely eliminated, according to COTAP.org.

Although it’s almost too cliché to mention, recycling is absolutely crucial to shrinking our carbon footprint. What industry experts refer to as “provision of goods,” which includes use of resources, manufacturing, transportation and eventual disposal of products, is responsible for a whopping 29 percent of all carbon emissions. And the only way to lessen that is to simply reduce, reuse and recycle.

The York Hill campus, completed in 2010, is outfitted with several eco-friendly features. The instantly-recognizable wind farm is capable of generating 32,000 kilowatt hours of energy annually. In addition, the rooftop of the Crescent building is equipped with 721 solar panels.

GreenReportCard.org is a website provided by the Sustainable Endowments Institute, a non-profit organization that advocates for sustainability among institutions of higher learning. Quinnipiac received a ‘D’ rating in overall sustainability by the organization, compared to UCONN, which earned a ‘B+,’ Yale, which received an ‘A.’

“I don’t think Quinnipiac does enough to lessen its carbon footprint at all, actually,” said sophomore finance major Matthew Potty. “As a small example, there’s only one recycling bin for every six garbage bins in the trash rooms. And it’s always full.”

Quinnipiac isn’t alone in the criticism it receives for not doing enough. In the national sphere, the Trump administration has been under fire recently for cutting national environmental programs.

Promising governmental initiatives to help fight climate change are being shut down, or at risk of being so, under Trump’s administration. In the president’s budget for the 2018 fiscal year, the Environmental Protection Agency’s (EPA) total allowance was cut by nearly a third. Meanwhile, the Clean Power Plan, which mandated a 32 percent cut in carbon emissions in the electric industry by 2030, is now on the chopping block.

Tans explains that even before budgetary cuts, environmental agencies simply are not big enough.

“The government should be regulating businesses, and have them use more eco-friendly technology,” Kim said. “They’re putting the economy before the environment, but the economy won’t matter when the planet is destroyed.”

Not everyone at Quinnipiac agrees.

“I think the budget cuts for the EPA are beneficial for the country,” sophomore biology major RJ DeSilva said. “That money can go into more important issues, like fixing the economy.”

While a lot of these events and studies are disheartening, Sam Cleland, a manager of a Cape Grim air monitoring system, maintains these studies are only scratching the surface of a very large issue.

“It’s really important that people get that there’s an awful lot that’s just not known yet,” Cleland said.