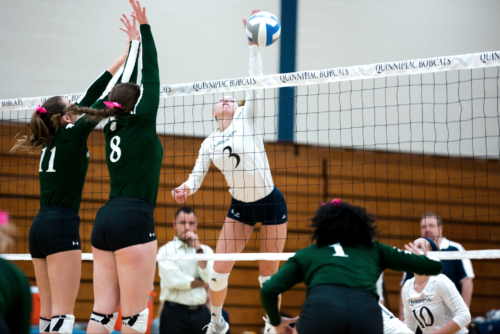 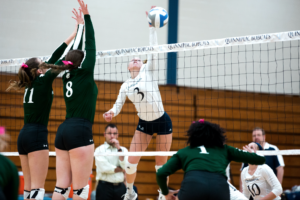 [/media-credit]“We knew we had to win this game to keep the season alive,” freshman setter Morgan Sherwin said. “It was a great win all-around for everyone.”

The Bobcats were able to hold on and win the first set 27-25. Then Quinnipiac looked like it was starting to pull away in the second set leading 19-14, but the Jaspers showed their resiliency and came storming back. Eventually, the Jaspers emerged from the second set victorious, winning 28-26.

All the momentum seemed to be on the Manhattan’s side going into the break, but the Bobcats came out a different team 10 minutes later.

Sherwin and sophomore middle-hitter Kaleigh Oates helped to set the tone in the third set to help the Bobcats win 25-15.

The Jaspers responded by going neck-and-neck with the Bobcats for most of the fourth set, but Quinnipiac refused to blow another multiple-point lead and finished off the Jaspers, 25-20, to win the game.

The Bobcats came into the game on a five-game losing streak and were just out of a playoff spot, being ranked seventh in the Metro Atlantic Athletic Conference (MAAC).

Manhattan came into the game on a three-game losing streak. In their last win, the Jaspers swept Saint Peter’s on Oct. 14, but lost their first 19 games of the season.

With an overall record of 1-22, the Jaspers were looking for a win against a struggling Bobcat team.

Despite losing a set to the second-worst team in the MAAC, head coach Kris Czaplinski is just happy that the Bobcats were able to end their five-game losing streak.

“I think any win is a confidence booster,” Czaplinski said. “A win is a win and we’ll definitely take this one.” 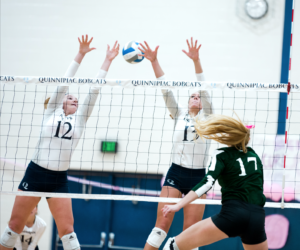 [/media-credit]The Bobcats have five games before the end of the regular season. Out of the five teams they will face, four of those teams hold a possible playoff spot.

Quinnipiac will be back at home to play Fairfield. The Stags are first in the MAAC and are on an 11-game winning streak, including a 10-0 conference record.

Even though Fairfield swept the Bobcats in three sets last game, Czaplinski says he isn’t going to make his gameplan too complicated.

“We just have to play our game,” Czaplinski said. “That’s something we’ve been away from for a while. If we can start getting back to the way we did things in pre-season to getting every person to do their job, we’re going to be okay.”