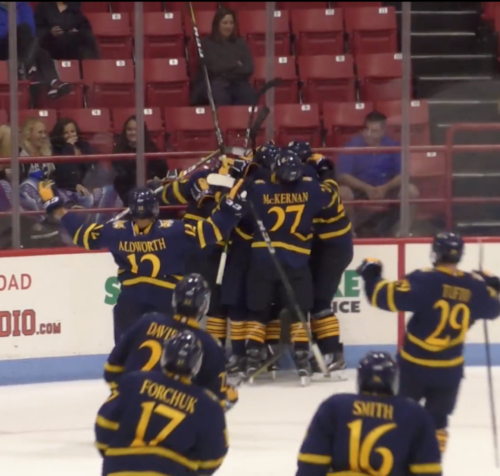 On Priskie’s first goal of the game, Smith recorded collegiate career point No. 100 with a secondary assist. He became the 39th player in program history and the first since Travis St. Denis (‘16) in 2015-16 to accomplish the feat. 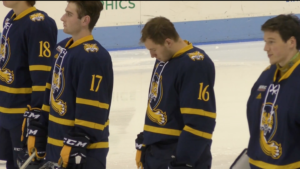 [/media-credit]“Obviously the 100th point is awesome, but more importantly we got the win,” Smith said. “It feels great to get a sweep of the weekend and really that’s all I’m thinking about.”

The Bobcats came flying out of the gates to begin the second game of the back-to-back.

Quinnipiac generated chances and possessed the puck in the offensive zone for the first five minutes of play until sophomore defenseman Brogan Rafferty was called for a roughing penalty.

On Northeastern’s power play opportunity, Huskies defenseman Garrett Cockerill fired a slap shot that missed the net, hit the boards and bounced to an open Dylan Sikura who buried home his NCAA-leading sixth goal of the season.

Following the goal, both teams exchanged respective penalties, but senior forward Tanner MacMaster took a late roughing penalty that extended into the second period of play.

The Bobcats were successful on the kill to begin the second frame and regained much-needed momentum as a result.

“Our structure was really good,” Quinnipiac head coach Rand Pecknold said. “…We have a system we play to and I thought we did that very well tonight.”

About halfway through the period, junior forward Thomas Aldworth drew another penalty, giving the Bobcats their second power play of the night.

As time expired on the man-advantage, a shot from Smith bounced to freshman forward Odeen Tufto who poked the puck out to Priskie on the left side. Priskie one-timed the puck from below the circle over Northeastern goalie Ryan Ruck to tie the game 1-1.

Not only was it Priskie’s first goal of the season and Smith’s 100th career point, but Tufto extended his point streak to five games (3-4–7) with the primary assist.

While the Bobcats seemed to be on the upswing, just over two minutes later, Sikura made his presence felt yet again when his crisp pass found Northeastern’s Grant Jozefek, who beat Shortridge up high.

Just 1:33 into the third, MacMaster skated into the offensive zone and found Priskie on his off-wing who ripped a shot past a laterally-moving Ruck for his second of the night.

— Justin Cait (@justin_cait) October 22, 2017
Both Quinnipiac and Northeastern had chances in the remaining 18 minutes and change, but the period ended deadlocked.

Quinnipiac headed to overtime for the fourth time in five games to start the 2017-18 season.

After back-and-forth action, Quinnipiac made its mark with 37.8 seconds left in the game.

Sophomore defenseman Karlis Cukste’s shot hit a defensemanand bounced to Whelan in the slot. Whelan then took a shot that was blocked by a defenseman, corralled again and finally buried over goaltender Ruck.

The overtime winner was Whelan’s fourth goal in five games to start the season, solidifying the sophomore’s spot as team leader in goals to begin the season.

“I was just thinking shoot right away because I knew there was only a minute left,” Whelan said. “Good things usually happen when you put pucks to the net, so I was lucky enough to have the rebound pop right back out to me.”

What a start for Alex Whelan, four goals in five games to start the season for the sophomore. #ECACHockey pic.twitter.com/0I4mMPllri

“We got a tough schedule here out of the gate and I thought we had done pretty well against not just Hockey East teams, but top 20 teams [and] excellent hockey players,” Pecknold said. “I was really proud of our boys tonight, they battled [and] bought in. If we’re going to have that buy-in we’re going to win a lot of games this year.