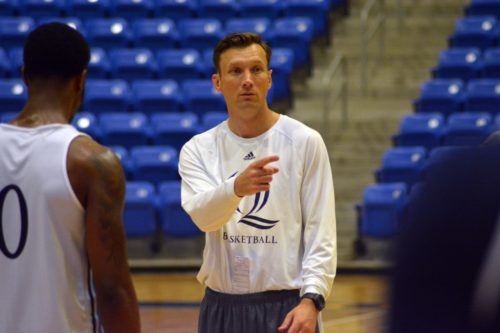 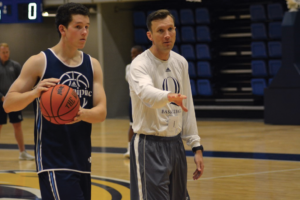 After two weeks of practice, head coach Baker Dunleavy, the former Villanova assistant and 2016 NCAA Division I Men’s Basketball National Champion, has been focusing on a variety of things with his new team.

“We’re just learning new concepts and getting familiar with the offensive and defensive schemes (that Dunleavy wants to run),” senior center Chaise Daniels said. “(We’re) becoming a team, building principles and just trusting each other to get ready for the season.”

Building is a key concept with these Bobcats. After losing seven of its 14 players from last year due to graduation or transfer, Quinnipiac must essentially rebuild from the ground up.

“This week has been about learning the fundamentals and the basis of what we really want to do,” graduate forward Alain Chigha said. “It’s been about listening and learning and competing at a high level.” 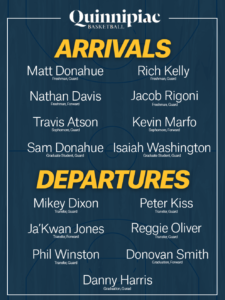 [/media-credit]Chigha, a five-year player from Cameroon, has seen the Bobcats at their highest and lowest points. In his freshman year of 2013-14, the team went 20-12. Last season, Quinnipiac fell to 10-21.

Despite the more well-rounded focus, a major point of emphasis for the Bobcats has been team defense. Offense was not a problem for Quinnipiac last year, averaging 76.7 points per game, which was good for fourth in the MAAC.

But on the other side of the ball, Quinnipiac had the worst scoring defense in the MAAC, giving up 83.3 points per game over its 31 contests. The next closest team was Marist, which surrendered just 79.1 points per game.

“For the most part, we have been working a lot on defense and defensive principles,” Chigha said. “That’s what we’ve been trying to get done.”

For the Bobcats to make any noise in the MAAC this season, they must play defense. MAAC powerhouse teams like Monmouth and Iona will be back and hungrier than ever, and Quinnipiac must come together quickly with this new group of guys. 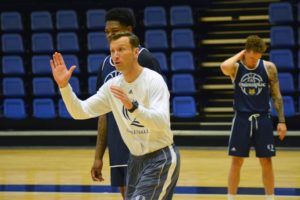 [/media-credit]While working on the Xs and Os of building a basketball team, Dunleavy has also been urging one main concept to his team.

“Togetherness,” graduate guard Isaiah Washington said. “(Dunleavy) preaches that we do it together. He knows it’s new, and he’s giving us time and being patient with putting in (new concepts).”

Washington, a transfer from Penn State with two years of eligibility remaining, feels a difference between Dunleavy and his coaching staff versus coaches he has had in the past.

“He’s more laid back in some sense, and then on you when he needs to be,” Washington said. “He pushes you in areas you need to be pushed. He doesn’t coach everyone the same, he’s not cookie-cutter, he adjusts to personalities. He knows a lot about the game, it’s amazing.”

In addition to grinding with his guys on the practice court, Dunleavy has already been working the recruiting trail for next year’s incoming freshman.

In the past month, high school senior guards Tyree Pickron of Philadelphia, Matthew Balanc of Silver Spring, Maryland and Tyrese Williams of New York, New York have committed to Quinnipiac. 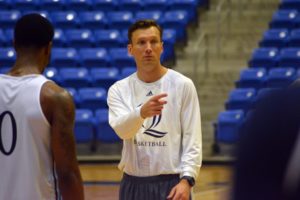 [/media-credit]“The coaching staff and the players had a major influence,” Pickron said. “I feel that I can really succeed in the school, and definitely succeed in basketball around those type of guys.”

Something is starting to build with this program under Dunleavy. Players, both present and future, are sold on him and his staff.

The results may not come this year. They likely won’t. But Dunleavy is still in the process of  turning over this team and creating his own identity.

Once Dunleavy gets some time to develop this program, Quinnipiac men’s basketball will be in for a huge turnaround.

Within the next couple of years, expect Quinnipiac men’s basketball to be legitimately competing in the MAAC year in and year out.