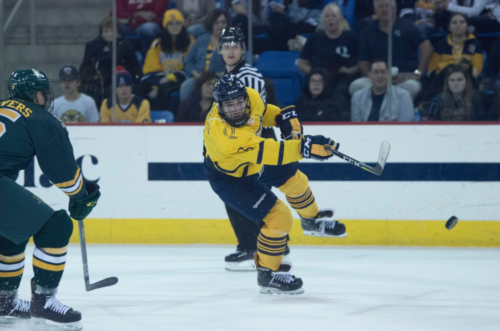 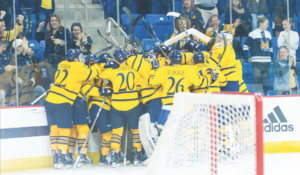 “Yeah, it might’ve been a little too much, but we needed that win.”

Freshman Odeen Tufto came back to earth in the press conference following Quinnipiac men’s ice hockey’s first win of the season on Saturday.

In his third career collegiate game, Tufto had the audacity to skate to center ice and celebrate emphatically right in front of Vermont’s bench after his game-winning, overtime goal.

— QU Men’s Ice Hockey (@QU_MIH) October 14, 2017
“That was the third overtime game in a row and we needed the win, so I’ll take it. Maybe it was a little too much, but yeah,” Tufto bashfully said after the game.

If you strip the electric overtime winner to its core, the win is actually a huge one for the No. 18 Bobcats.

All three of Quinnipiac’s games to start the season were against Hockey East opponents and each game was a neck-and-neck battle.

To get a “1” in the wins column is a confidence booster heading into a weekend in which the Bobcats face yet another Hockey East opponent. 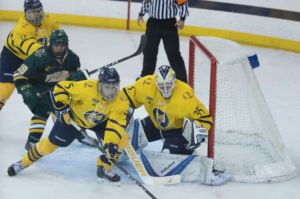 [/media-credit]This time they travel to Northeastern for a back-to-back series against the No. 14/16 Huskies.

Despite Northeastern’s high-end offense — which features NHL draft picks Adam Gaudette, Dylan Sikura, Nolan Stevens and Matt Filipe to name a few —  Quinnipiac has confidence that its defensive core is more than capable of handling the task at hand. Especially having already dealt with firepower from Boston College, Boston University and a faiy tough top-six from Vermont.

“We rolled all six [decensemen] most of the night. They made plays, they defended well [and had] good sticks,” Quinnipiac head coach Rand Pecknold said following Saturday’s win. “I think they really played to our identity. We’re happy with the D-core through three games.”

However, on the other side, the offense has produced only six goals through the first three games, all of which came from just four players.

The transparent question remains whether or not Quinnipiac’s offensive production can find ways to finish.

It might be due to the Bobcats gaining their sea legs or maybe having faced what Pecknold calls “three of the best six or seven goalies in the country” (Joseph Woll, Jake Oettinger and Stefanos Lekkos) start off the season.

But despite the slow start on paper, the Bobcats feel as though it’s simply a matter of time until pucks find twine. 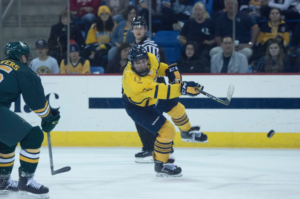 [/media-credit]“Right now we’re getting chances [in the offensive zone] and we’ve been working all [year] on that,” Sophomore forward Alex Whelan said at the team’s first practice since Saturday. “Now we’re starting to click together, so I think it’s good for us to be getting pucks to the net. The scoring will come.”

Although sample size is still small, the Bobcats are a top 20 team in the nation in terms of even strength Corsi For percentage (a stat that tracks any shot directed at the net, whether blocked, missed, off the post or scored) among teams that have played three games or more this season. The Bobcats have also averaged 40 unblocked shot attempts per game so far, according to College Hockey News.

This all comes against Hockey East opponents who compete in a superior league as a whole to the ECAC.

“You’re going to get your bounces some games and not get them other games,” senior forward Tanner MacMaster said. “You just have to keep battling and keep working and those should go in.”

With the defense and goaltending being the least of Quinnipiac’s worries early on in the season, this is the integral point of emphasis surrounding the Bobcats at the moment.

Northeastern, an offense-first team, will be a true test in terms of finding the ability to finish, and Pecknold is well aware. 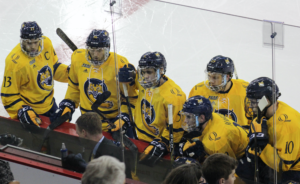 [/media-credit]“It’s part of hockey…there’s tons of times you dominate and all of the sudden you’re down 1-0, 2-0 and have to find a way to fight back,” Pecknold said. “…We [have to] get the puck down low, really work our forecheck, possess it and cycle it and make [Northeastern] defend.”

Quinnipiac’s ability to score will be truly tested starting this Friday at Matthews Arena in its first road series of the year.