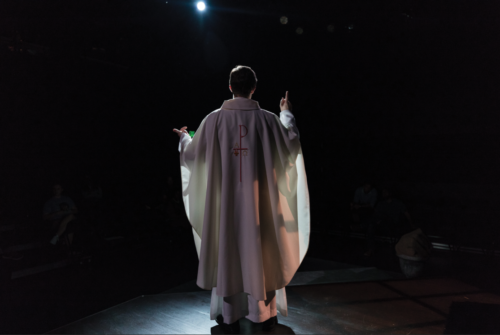 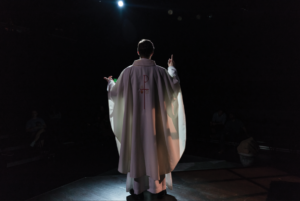 [/media-credit]As attendees entered the black-walled  theater within the Theatre and Arts Center, the room was filled with the sound of simplistic organ hymns and the stage was dimly lit. The lights displayed a soft pattern of stained glass on the courtyard set, while on the stage, one faint golden light shone on a lone crucifix hung on the wall. Every few minutes the hymns would be changed to sounds of fluttering birdsong, creating a mystical ambience within the room. Then, the feature presentation of “Doubt: A Parable” began.

The drama, directed by Tom Schwans, told the story of a principal of a Catholic school, Sister Aloysius Beauvier (Nicolette Fino), and Sister James (Tess Adams), a teacher. They suspect the school’s pastor, Father Brendan Flynn (Nicholas Fetherston), of having an inappropriate relationship with one of the school’s male students.

With the help of Joy Alino (Mrs. Muller), the cast of the play created an important dialogue about morality and image that can be seen reflected in today’s society.

This parallel between the content of the play and our reality was discussed in the note from the director within the playbill:

“As a nation, in the last few months, we needed to re-evaluate who we are and what we believe. What we thought was true, may not have been,” Schwans wrote. 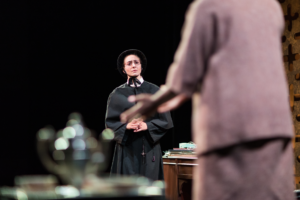 [/media-credit]Assistant Director and Quinnipiac senior Tori Wakefield added her interpretation of the play.

“Our society is going through a lot of the meanings behind ‘Doubt,’ the concepts of it and the uncertainty and such,” Wakefield said. “So bringing it into this theater and especially in our department is changing so dramatically that a lot of us are having uncertainties about what direction we’re going to take.”

Throughout the play, the audience is forced to decide on its own whether or not Father Flynn is guilty of the immoral acts he has been accused of. The play offers no clear evidence to validate the crime and doesn’t favor either side of the argument—the ending of the play consisted of a devastating cliffhanger which leaves the audience questioning its own beliefs. This conclusion actively involves the audience in the production and the audience was also involved in many other ways.

“There’s a lot of elements of not knowing who you can trust at this point and with what’s going on in America today, where we are for better or for worse, it’s a very big play regarding image and how you carry yourself can really take a toll on how you’re perceived by the public,” Fetherston added.

In specific parts of the dialogue, the characters looked toward audience members and talked to them as if they were a part of the scene. The cast members also came out of entrances that were close to the seats, adding a personal and almost tangible quality to the performance. This personalization was also generated by the size of the theater. 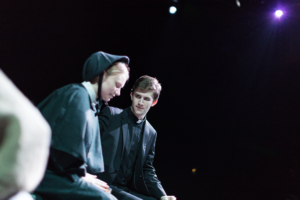 [/media-credit]The state of the art black room that holds around 90 people was quite an asset in establishing interaction. The stage was so close to the front row that even from the last seats in the back, the details of the actor’s and actresses’ faces were clear. There was also no trouble in hearing the performance and the sound effects added life to the room.

As the first theatrical debut of the Theatre and Arts Center, this astounding performance cemented the respectability and success the department hopes to attain.

This production left no doubt that Quinnipiac’s Theatre and Arts Department will have a lasting impact on the community.