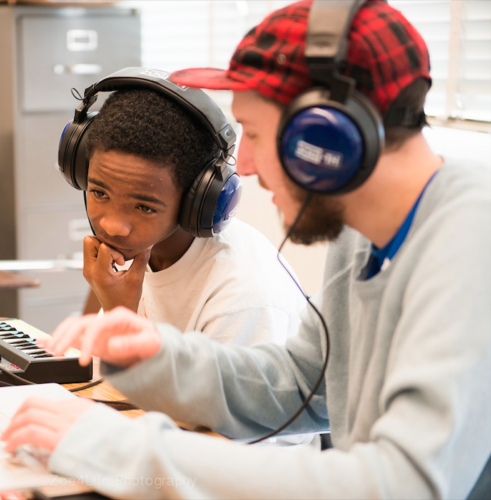 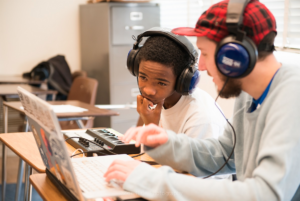 [/media-credit]For anyone that walked by the Mount Carmel Auditorium on Tuesday evening, Oct. 10, they might have thought there was a party inside. A DJ stand was set up in the front, blasting hip-hop music.

The event was actually a discussion about connecting hip hop with education. Elliot Gann, the executive director of Today’s Future Sound (TFS),  ran the event and discussed the program’s purpose: go around the world to underprivileged classrooms and teach beat-making in order to enhance the core curriculum. By doing so, it gets kids to think outside of the box in a hands-on way.

Today’s Future Sound is a nonprofit organization in California. The mission of TFS, as stated on its website, is to “use music production and media arts as vehicles to empower youth as artists and community members while fostering their well-being as individuals.” This gives students a knowledge of themselves, as well as their culture. 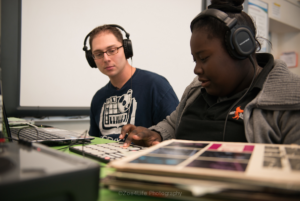 [/media-credit]“I believe it has an impact on their identity and positivity,” Gann said. “By creating music with one another, the community is building bonds and connections it would not have had the chance to otherwise.”

While in the classroom, TFS places the students in groups to produce a song. Everyone has a role. If someone is not into the production aspect, they are assigned another role in creating the art for the cover. The album cover and name is completely determined by the class. By the end, students have a CD to take home with their song on it.

Howard Garnder’s multiple intelligences findings was the inspiration for TFS to create something more beneficial for students. The eight intelligences include musical-rhythmic, visual-spatial, verbal-linguistic, logical-mathematical, bodily-kinesthetic, interpersonal, intrapersonal and naturalistic. Garnder found that the standard way for teaching does not trigger all of the intelligences. Incorporating music in the classroom does accomplish this.

“I think music should be involved in all classrooms because each student has their own way of learning,” sophomore interdisciplinary studies major Lydia Moriber said. “It’s important to include different learning techniques in the classroom setting to suit all students needs.”

Gann believes ADHD is a common misdiagnosis these days. He thinks students have a deeper-rooted problem that is under-explored. Many people are familiar with PTSD, but not aware of another form of stress, complex-post traumatic stress disorder, also known as complex trauma disorder. This disorder is a psychological disorder thought to occur as a result of repetitive and prolonged trauma. Students with this condition have problems focusing due to a constant state of fight or flight mode. Yoga, meditation and music are all ways one could ease this. 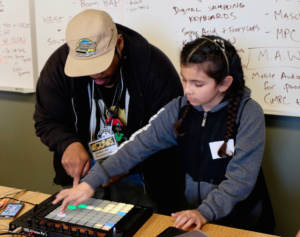 [/media-credit]TFS chose hip-hop because of its cultural relevance and thinks pop culture is easily identifiable to kids. It empowers the creators to form a new identity and be in a creative space.

Through the use of “beatology,” creating this content requires critical thinking and media literacy. The importance of knowledge of self and history plays a massive part in TFS goal.

TFS has traveled to Australia, Canada, Africa and many other countries. In the United States, it has gone to Mississippi, Louisiana, Texas and New York City. It does not limit itself to standard classrooms either, as they have gone to Juvenile Detention Centers, too.

“(TFS) directly addresses a lack of culturally responsive educational, therapeutic and social interventions for people of all ages by bringing our mobile music production sudio to their door,” according to TFS’ website, proving its focus on its mission.