Families become Bobcats for a weekend 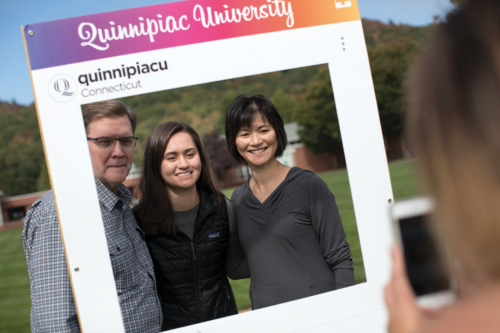 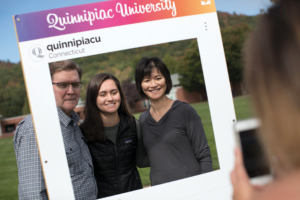 [/media-credit]Quinnipiac’s annual Parents and Family Weekend is an opportunity for students to have their families come to the university and show them how they are acclimating into the QU community.

There was a record number of people on campus this year, with over 5,000 parents and families participating in the activities the university had to offer, according to Vice President for Development and Alumni Affairs Donald Weinbach.

Weinbach, who has been working Parents and Family Weekend at Quinnipiac for 21 years, believes this year was a success.

When arriving on Friday Oct. 13, families were directed to the Carl Hansen Student Center to receive a small gift from the university to celebrate the weekend.

Starting at 1 p.m on Friday, families were welcomed to go to a program designated to their student’s major and were able to learn what is going on in the classrooms at the university .

Associate Professor of Journalism Ben Bogardus and his Quinnipiac News Network (QNN) class demonstrated how technology in the Ed McMahon Mass Communication Center studio works, and showed students how they could use this technology themselves.

“I spoke in the beginning, telling parents and families how we operate the class and what goes into putting on the newscast,” Bogardus said.  “Then, during commercial breaks, I provided more commentary on what the students were doing and answered questions.”

Continuing on in the evening, parents were welcomed to go to an array of different events. Starting at 5 p.m., the Herald House for Jewish Life invited families to come to Shabbat dinner, following services and candle lighting.

At 7:30 p.m., if families purchased tickets ahead of time, they could go see the student performance of “Doubt.” Freshman Nicole Gibson attended the play and said it was just amazing. 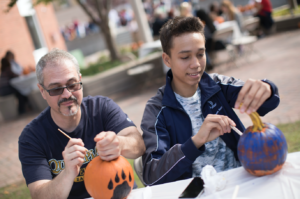 [/media-credit]“The actors really portrayed the story really well, and it made you feel something, which doesn’t really happen to me,” Gibson said.

Parents and families who purchased tickets before the weekend attended the live concert event Rocktopia at 8 p.m. at the Oakdale Theater in Wallingford. However, if they got the VIP tickets, families could go to a pre-concert reception starting at 6:30 p.m.

“As for the concert, the music is right up my alley. I started singing all of the songs at the top of my lungs,” Gibson said.

Freshman Andreya Pencak went to the women’s soccer game with her parents and felt nostalgic.

“Watching the soccer game with my parents was really awesome because we were able to create new memories watching a sport I’ve been playing since I was little,” Pencak said. 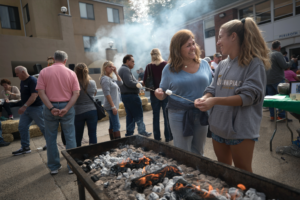 The weekend concluded on Sunday Oct. 15 with a 10:00 a.m. Catholic Mass taking place in the Catholic Chapel, Center for Religion on the Mount Carmel Campus.

The addition of Rocktopia to this year’s event attracted more families to come on Friday night as well as Saturday, according to Weinbach.

“We’ve been getting extraordinary feedback like never before,” Weinbach said. “The programming that we did, the changes we did, were well received.”